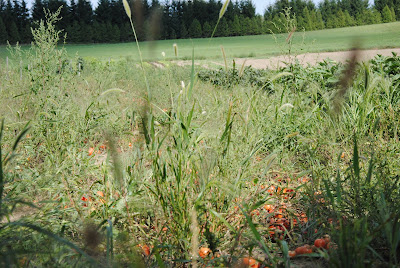 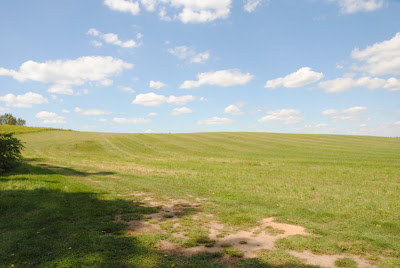 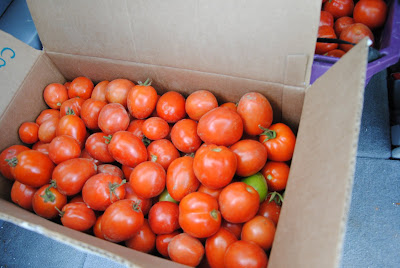 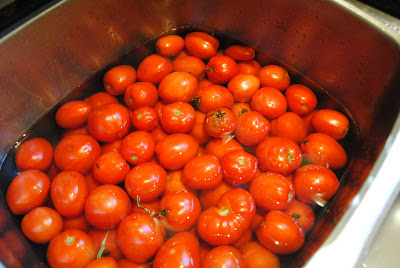 The kids are hard to budge these days. Friday, Fooey had a dr’s appointment in the morning and we all went along for that (me and the kids) and it went quite well, but Fooey’s reward afterward was to get to watch a movie … which everyone else decided to watch, too, and then she wanted another movie, and TV, and on and on, until it was early afternoon, and I finally summoned the energy to say: no! We are going out, and now. Our outing? To pick tomatoes for canning. It was a bit of an impulse adventure. And it seems to take a herculean dose of energy to get everyone organized (water bottles, sun hats, snacks) and out the door (“I’m not going!” “I hate tomatoes!” “You’re such a mean mommy!”). If half the gang is excited, the other half is almost guaranteed not to be. One must first find an idea–an outing, an event, a destination–and then one must convince all involved that it is worth being roused for, and when this proves fruitless, one resorts to the methods of dictatorship: everybody march! It’s for your own good!
And it is. I promise.
We found the field, using my googled and scribbled instructions … and by God it was beautiful. “Don’t you feel better already? Just being out here? Isn’t this wonderful?” (For which I received some muttered agreement from the masses, if not outright enthusiasm). The sun shone, the tomatoes were ripe and plentiful, so many on the vines that we had to be careful not to step on them (they are paste tomatoes and grow on vines that crawl along the ground). In forty-five minutes we had picked approximately 55 pounds of tomatoes–or one bushel. CJ was the most enthusiastic helper, which explains the number of green tomatoes in my bin. The older kids grew tired and sat in the grass under the shade. But I was positively ecstatic. Dirt, sun, sky, the scent of ripe and rotting tomatoes. 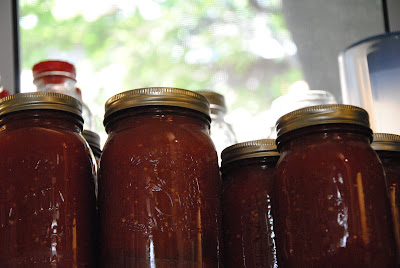 Arrived home brimful of renewed energy and direction, and brewed up a pot of pearsauce using pears picked by a neighbour’s daughter and delivered hours before, managed to get the pearsauce canned, and then flew out the door with Kevin to see a friend play her uke at a festival in a nearby town.
:::
Yesterday, I started the morning with a run, then got to canning the first 1/2 bushel of these tomatoes, which turned into 7 quarts plus 7 pints of tomato puree. Kevin took the kids out for most of the afternoon to the Buskerfest (spend-your-money-fest), and everyone returned home with giant inflatable hammers and bats (sibling whacking devices) won in dart tossing games. Then we headed out after supper, on bicycles, to see our first roller derby match at the nearby rec centre. The kids had a blast, though mentioned it was awfully LOUD (was it ever). And Kevin and I enjoyed it too; though it didn’t inspire me to want to lace up my skates any time soon. Yikes. They fall down hard and often, and onto concrete.
::::
Second round of canning underway today. Have put on a batch of yogurt, too. Tomorrow, we’ll be out of homemade bread, again.
Will I exercise today?
I’ve noticed that my photographs have gone downhill. And I’ve been writing nothing but blog posts. Is this a factor of time, or energy? Do I have a limited amount of energy–creative energy inseparable from energy generally–and therefore I am using up all of my creative juices on early morning runs/yoga sessions/learning to swim/bike rides? The thought is slightly horrifying. Then again, maybe it’s just a downward dip, a little fallow period in the days before the new school year begins, and the rest of life and duties and new (and familiar) directions begin again.