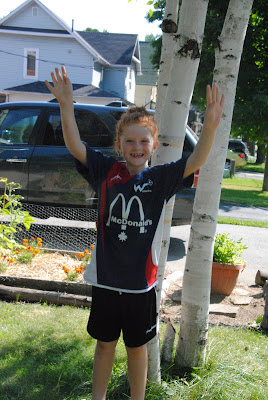 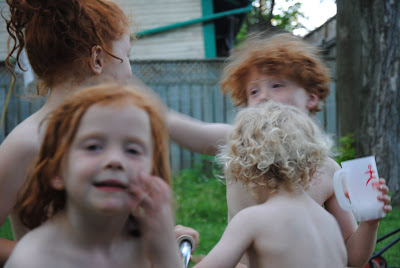 I want to capture the flavour of our summer holiday so far. It’s been busy, but relaxing. We started with a camping trip, and the beach, experienced a couple nights of overnight camp (and for Kevin and me, experienced only having two children around–it was quieter, but the workload was not noticeably different, except that the younger ones missed the entertainment of the older ones). I enjoyed doing a long drive with the kids, and could imagine attempting something like that again–destination as yet unknown. Though it does go against my no-driving summer. Confession: We have done extremely poorly with that plan. Drove to camp, to beach, to camp, to home, to camp, all the while enjoying the air conditioning. For our Friday outing, we walked, but it’s not a huge accomplishment–the movie theatre is uptown. We saw Shrek Forever After, which was more entertaining than I anticipated–and the kids were awesome the entire time. Five kids, one parent, and no bathroom breaks, spilled drinks, or even excessive whining. Thank heavens, because I’d had a writing morning, and I am finding the transition between writing and parenting particularly challenging; translation: Mama’s been grumpy.

:::
AppleApple had her soccer tournament this past week. We dragged out the whole family (some of them kicking and screaming) to the Saturday matches. I felt like a terrible parent, because honestly, folks, I squirmed the whole time she was playing. It’s a peculiar pain–mental anguish. Shouldn’t I be enjoying this, as a loving caring parent? Or maybe it’s that I care too much? In the second game, the ref called back a penalty kick on which AppleApple had just scored an amazing goal (he apparently had called an indirect penalty kick, but gave the children no direction or explanation about what that meant; he, of course, was just a kid himself, and looked pretty nervous; but it was a sad moment to see her beautiful goal called back). And I muttered to Kevin, I just can’t take this, and walked down to where my other three children were wrestling in the grass; but I couldn’t go far. I knew if something happened I’d want to be there for it. And sure enough, after a few deep breaths, I returned to the sidelines–and watched my red-haired fleet-footed daughter on a breakaway–and she scored. The only goal of the entire game, for either side. Now that was a moment worth being tortured for. (And it was a merciful high to end an otherwise losing tournament.) AppleApple cannot wait to go to skills camp this fall, and wants to play indoor soccer over the winter–she’s seen her own potential, and she’s excited to play more.
I must steel myself. How do other parents cope? I imagined being a family member of those young men playing in the World Cup final yesterday–standing on the sidelines, pacing, or unable to look.
:::
That was Saturday. We ended with a marshmallow roast over the fire pit. This was a classic family event, following the classic arc, rising slowly to pleasant heights, and crashing steeply to the depths. That would be the classic tragic arc, but our event did not end in tragedy, just bathtime (which for some of us might just be considered a tragedy). We set up the fire pit, gathered drinks and stools and chairs, and sat around, fooled around, then out came the marshmallows and pointy roasting sticks, and the guitars (that was Albus’s idea). Kevin and I tried to coordinate our chording. I have rhythm, and he does not; he can play chords, and I cannot. We make a swell team. The neighbours must have been thrilled. But for a brief spell it felt like such a holiday, such a time away from ordinary: the smell of the campfire, the mellow sound of guitars, making up funny verses to songs. (“CJ is sticky,” was a popular line.)
And then CJ wanted to play “Dragon Warrior” and Albus had an itchy back, and the two of them were rolling around the grass, when calamity struck–or more accurately, CJ struck. With two mini-hockey-sticks. Two-year-olds. They don’t get boundaries. So that was that. I put down the guitar, plucked up the sticky two-year-old, confiscated the mini-sticks, and headed for the bath. Soon, everyone was in the bath/shower, watering can was applied to the fire, and it was bedtime. But Kevin and I stayed up late after the kids were asleep.
:::
That’s been the story of our summer holiday so far. Kevin and I have been staying up late. The kids have been staying up late. We’ve had some fun; and we’ve had some abrupt end to the fun; we’ve been sticky, and we’ve gotten clean.
Warm-Up
Don't Be Frightened, It Won't Last