Don’t Be Frightened, It Won’t Last 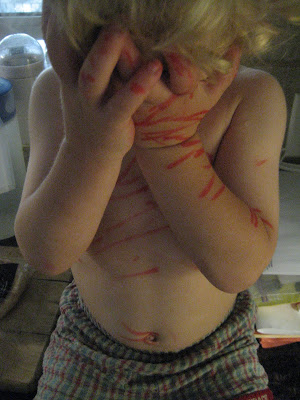 This is Kevin’s story, not mine. Yesterday evening, while I was out exercising (mental health), Kevin was home with several extraordinarily grumpy children. He set them up with a movie, went outside to water the plants, came back in and sat down with the newspaper thinking he’d grab a minute of calm for himself. He had just read the “thought of the day” in the Globe and Mail.

“There are moments when everything goes well; don’t be frightened, it won’t last.” – Jules Renard

As those words hit his eyeballs, he heard crying from the basement. The movie was over (though he hadn’t realized, it was a very very short movie). The older children were complaining vociferously. And CJ was covered from head to toe in permanent marker (his own doing). He was the one crying. Kevin said he just stood there in horror. Then he popped CJ directly into a bath and the permanent marker proved not so permanent after all. He introduced me to the subject by having me read the quote, then showing me the photo (above) and saying the words “permanent marker.” Needless to say, all my zen calm went out the window till I’d heard the end of the story.

Seriously. I was imagining that child striped with permanent marker ALL SUMMER LONG.

1. I’ve decided (for now) not to write more about writing. It’s too risky; I’m too superstitious. Everything that I write about writing has the potential to be a complete lie. In the moment, or immediately afterward, I might feel that something I’ve written is wonderful–or terrible–and time might prove it to be quite the opposite.

2. However, I will say that writing and yoga/exercise go together extremely well. I was in a muddle over a story that wasn’t working (there I go, writing about writing), and instead of giving into anxiety, I thought, hey, I’ll take this to yoga. For those of you sick of hearing me blither on about yoga, you can insert the word “meditation” instead. It’s where I go to find meditative space. I haven’t found a more effective method of removing the self from myself than through guided movement that is challenging to breath and body. So, I took the story to my meditative space. And then I didn’t think about it for the entire practice. And at the end, I had a calm reflective observation to take home again: the story wasn’t working because it was trying to do too much. And it was expressing something that I didn’t want expressed through my character. So I scrapped it, and started over completely afresh. It was a relief not to waste more time muddling.

3. Meditative calm: is it a selfish pursuit? Sometimes, when I leave behind a pile of frantic children and kind generous husband, the impulse to go off on my own feels hideously selfish. But here’s what yesterday’s practice brought to me, in calm reflection: self-knowledge is not the same as selfishness. If I did not take time to recognize my own motivations and know my own desires, my boundaries would be muddier, my actions murkier; I would risk carrying anger without knowing why, or bitterness, or fear. I would be more likely to blame my circumstances and my loved ones for anxieties of my own creation. There is no perfection. I might come to know things about myself that are uncomfortable and unflattering. It’s not a route to happiness or contentment, either. What it brings me is access to calm.

4. I’m still looking for ways to find calm within noisy moments. The other evening, this is what worked: I said, “I am not going to start shouting.” No one could hear me saying it, because in order to be heard over the cacophony, I would have had to start shouting. But when I start shouting, whether or not it is in anger, my body interprets it as distress. Even if I am shouting in a calm way, just to be heard, my body hears upset, and emotional escalation is inevitable. So. I just repeated over and over that I would not start shouting–as much to remind myself as to inform the kids. Eventually, I found a break in the sound, and was able to communicate: time to brush your teeth. The evening progressed with remarkable calm (Kevin was at soccer; those evenings on my own are evenings when I really do need to remind myself not to shout).

5. What I like most about meditation is something I resisted strongly at first. Stop telling yourself your stories, my favourite instructor told us. I was like–yah, right, that’s my job, that’s what I do. I’m not about to stop. Slowly, with practice, I got braver. I realized the stories weren’t so fragile that they would get lost; though in truth, they do change. I began to let go of the stories, the interior narration, during the practice. Madeline L’Engle, in one of my favourite books for teens, A Ring of Endless Light, wrote about letting go of “very me,” to make room for “very God.” In other words, make space for illumination. The mind is a miraculous place. Just because you’re not consciously thinking about a problem or a worry or a story doesn’t mean your mind isn’t sitting with it somewhere deep and low. When I practice emptying my mind, afterward amazing unexpected observations (I hesitate to say solutions) come flooding home. There is space where before there was not. And the space is compassionate and open and loving, so there’s room for ideas that I might not accept at other times. How often have I refused an idea out of fear or laziness?

For example, I wanted that story to work and kept muddling over it because it was a story already mostly written (an older story) and it seemed easier to work with something that already existed than to start from scratch. It was a barrier impossible to recognize without calm reflection.

6. I know yoga isn’t the only route to calm, though it happens to be mine, right now. Kevin says he finds that kind of quiet, deep, meditative thought while gardening. I wonder where you find yours?