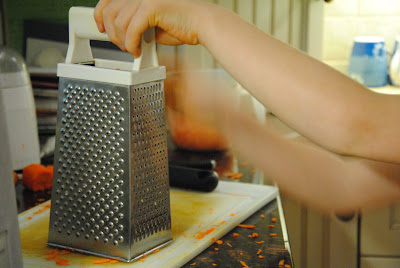 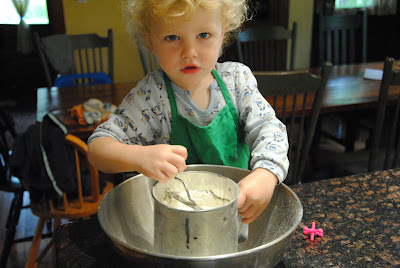 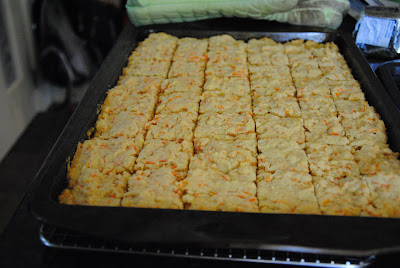 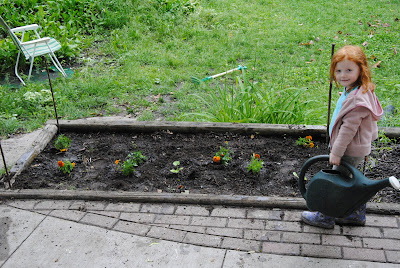 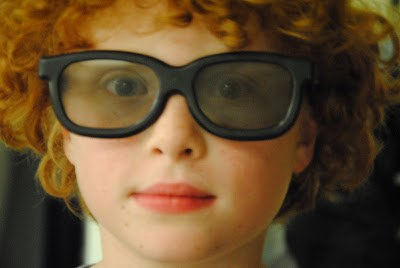 Beat together 1 cup of butter, 1 cup of white sugar, and 1/2 cup of brown sugar. When creamed, add 1 cup of vegetable (canola) oil and beat till combined.

Sift together separately: 4 cups of flour (I used all white, but my guess is that you could substitute some whole wheat); 4 teaspoons baking powder; 1 teaspoon salt. Stir into wet mixture.

Spread on a greased cookie sheet, and bake at 350 for 20-25 minutes (in my oven, it took 23 minutes to reach buttery soft goodness). Remove from oven, cut into squares while still in the pan and hot, and let cool on the tray before removing to storage containers. In keeping with my no-pre-packaged snack plan, I’ve made up three containers with eight bars in each in preparation for piano and swimming outings (those have gone into the freezer). I also have a full container for eating and lunch boxes sitting on the counter.

This was a good use for those extra carrots languishing in the bottom of our veggie drawer; AppleApple took the last and rubberiest to her horse camp this afternoon.

Today, I woke up early to go for a run with a friend. We got soaked and the rain was cold, so we did not go quite as far as usual. When I returned, I fed the kids “dessert as breakfast”: leftover rhubarb crisp, served with milk over top. Kevin informed me that my clock was off due to waking so early, and all day I’ve tuned in to CBC Radio in the Maritimes, because it runs an hour ahead of CBC Radio here.
It has been a wonderfully productive kitchen day. Started by making 1. the above carrot bars (with help from AppleApple on the carrot-peeling-and-grating, and CJ on the sifter; whenever we start to bake together, he runs to wash his hands, and then shouts: “Where my napkin, Mama? I want my napkin!” Translation: apron). Then, helpers bored and dispersing, I whipped together 2. Really Good Granola, which, judging by anecdotal feedback, just might be the most popular recipe on this blog. While that was baking, I made 3. my traditional Sunday waffles, with three bags of leftovers frozen for breakfasts this week. Because making waffles is a brainless activity involving time rather than focus, I took the opportunity to attempt 4. yogurt. By this point in the morning, let it be known that I was a touch irritable. Do not interrupt your loving mother while she is trying to do something finicky and brand-new! (It is safe to report that my children rarely–perhaps even never–take note of such advice).
To make the yogurt, I used this recipe, and this one, too, kinda. If it works, I’ll detail my method in another post. The jars are currently sitting in a cooler (in this case, it’s a heater, with boiling water in a container to keep it warmish). I will let you know. Between snapping at children who wandered between me and stove, I had to remind myself that I will make mistakes and operate less-efficiently the first time around, and that it will get easier as it becomes more familiar (like bread-baking, something I can do with my eyes closed; almost).
I still haven’t solved how to make yogurt without creating plastic bag waste (in Canada, our milk is sold in 4 litre quantities divided between three thick plastic bags, which completely amazed and baffled me at age ten when my family moved back to Canada–milk in bags? This is definitely less wasteful than milk in solid plastic containers. But where can I buy milk in returnable glass jars? Without, as mentioned in an earlier post, having to forgo sending my children to university?). That was a long aside. I’ve totally lost all track of where this began. Oh, the final cooking venture of the day is 5. tomato sauce for supper tonight, made up fresh using tomatoes frozen last summer; a batch big enough to put some away for another meal this week or next.

Fooey spent all morning outside with Kevin, working on her own garden patch. Today is cold. That was some hard work. She came inside for some waffles and playtime, and is back outdoors again. “What would you like to do today?” I asked her this morning. “Look for Pooh Bear, and play.” “Anything else?” “Nope. I guess playing is what I do.”

AppleApple spent all morning working on a magazine she plans to produce, inspired by the “newspapers” that I made many years ago, and which one of my brothers printed and bound in hard cover for posterity, as Christmas gifts, a couple of years ago. AppleApple found the “book” on our shelf and was entranced. We are still working out what computer program she could use to most easily produce the magazine (ie. with the least assistance from her parents). Today, she took a number of photographs for the first edition, brainstormed story ideas, and interviewed every family member on subjects such as: “What is your favourite toy?” (Published interviews will not include CJ, who was taking too long to reply, and being too silly). If you live in the neighbourhood, you might just receive a hand-delivered copy of her first edition sometime in the next several weeks. If you live far away and would like a copy mailed to you, please drop me a line. This is assuming her project comes to fruition … but the child is very determined …

Albus has had a friend day; in fact, he’s had a friend weekend. He was also treated to a 3-D movie last night (the latest Shrek), and returned home with these glasses, of which he is very proud. (I will not post the photo of Kevin in the same glasses, shirtless and wearing his pants like a hip-hopping teenager, which was what he was wearing–minus the glasses–when Albus arrived home and Kevin went outside to chat with the mother who was dropping him off. Now you want to see the photo. But I’m keeping it for future blackmailing purposes).

A Key
I Took Notes