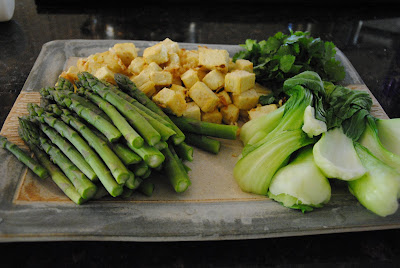 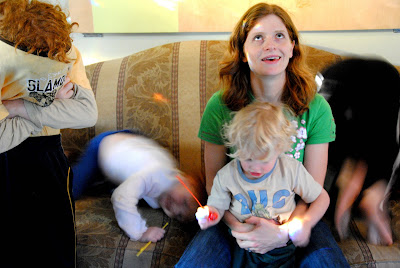 I made a special Mother’s Day supper for myself: blanched local bok choy and asparagus, chopped local cilantro, heated and spiced homemade frozen chicken broth, dredged tofu squares in cornstarch and fried till crispy, cooked rice noodles and rice, and brought the feast to the table. Lately, I’ve been serving meals with options. I bring the options to the table, and everyone customizes the meal to his or her liking. This has proven very popular indeed, though does mean that Fooey’s been eating a lot of rice with yogurt. This was make-your-own soup night. It was delicious. As usual, the meal was interrupted by trips to the potty (me and CJ), and so by the time I’d gotten to my second bowl, the table had emptied and I was finishing my Mother’s Day supper alone. Which isn’t the worst fate for a parent.
But then I choked. I really did. I felt something slide down the wrong tube. I stood and assumed the classic choking pose (hands to throat) and walked to the living-room. I was still coughing, but the cough seemed to be dragging the thing further down, blocking the airway almost totally. Since I couldn’t speak, I looked at Kevin, and he looked at me–with what looked to be some annoyance. Like, really, honey, you’re seriously choking? And I was like, yes, I’m seriously choking. Good thing I’m the one who took the First Aid course. Meanwhile, in the background, as I thought to myself, well this is really not the way to go, I could hear my children’s voices. Fooey and AppleApple were hollering, “If you’re going to throw up, go to the bathroom, Mommy!!!” And Albus was repeating, as if deranged, “Mother’s Day surprise! Mother’s Day surprise! Mother’s Day surprise!” These would have been the last words ringing in my ears had I not reached down my own throat and dislodged a cilantro stem. Kevin got into position (it’s not called the heimlich anymore), but I indicated that I was once again moving air into and out of my body. Things began to calm down. The scene returned to normal. But it sends me into paroxysms of hysterical laughter to recall Albus shouting, “Mother’s Day surprise! Mother’s Day surprise!” Tell me that wouldn’t make for a good line in a short story. Where did the kid get his dark sense of humour? (I couldn’t get him to parse afterward why he’d landed on that phrase. He said he knew I wasn’t dying, so that’s why he said it).

To commemorate Mother’s Day (though not the choking incident specifically), after supper, I took a few photos with the kids for the 365 project. I’ve started calling it my 365. As in, I haven’t taken my 365 yet today. Which I haven’t. But I have gone to yoga class. I’m not sure I would have made it this morning had CJ not woken three times between 3am and 5:30am, and when I convinced him to return to bed after the last nursing session, I got up, ate a banana, gathered my gear, and escaped. I thought, at least if he wakes up again, I won’t be here to have to fetch him. He only agrees to let Kevin help if I’m nowhere in sight. And then I was so glad I’d gone to class, despite only five hours of broken sleep. Moving while breathing, in a room of other people moving while breathing. It’s a good solitary/yet not-solitary ritual. I’ve now gone to seven classes in eight days as part of the studio’s fifteen day challenge. It’s been easier than it likely sounds. But our family’s schedule is so busy that I can’t find time to go again till Wednesday, early morning. My best discovery during this process has been that I love practicing first thing in the morning. I’m weaker, less flexible, and it’s harder to balance, but I don’t push myself quite so hard either. I’m kinder to myself first thing in the morning. And I’m closer to sleep, so I’m closer to that dreamy in-between meditative state. It’s been easy to find that quiet mind in every class this past week, but sometimes I wonder whether I’m now practicing on auto-pilot. Is it a good thing to go away from myself so thoroughly, to be lost in the moment, to be mindless? I’m emptying my mind during that hour and a half practice–with what am I readying it to be filled?

Last night, for our Sunday-night movie, Kevin and I watched No Impact Man. It is an inspiring and entertaining film, and what makes it really good is the dynamic between husband and wife. The premise is that the husband (a writer) wants to write a book about living a year with no environmental impact whatsoever, a pretty much impossible experiment, but one into which he throws himself, and his family comes along for the ride too. He and his wife (also a writer) have one young child, about CJ’s age in the movie, and live in New York City in a small apartment that’s perhaps on the ninth floor. They stop using elevators, subways, cars. They stop eating out, and only eat local food. They give away their television. They buy next-to-nothing, and nothing new (including toilet paper). As the experiment progresses, they do with less and less, including no electricity. They wash their clothes in the bathtub with homemade laundry soap. The wife is not a typical environmentalist, and her voice makes the movie refreshing. She sneaks off to get her hair dyed, and needs needs needs coffee. It actually ends up being a dynamic and moving portrait of a marriage. Going off to bed, I wondered what more I could be inspired to do. The idea of giving everything away actually makes sense. It is so hard to go by half-measures. The things that jump to mind for me are … well, honestly, this computer. Can I put limitations of my computer use–would I bide by them–or would it be easier just to close it up and put it out of sight, use it only during working hours? There is some freedom to that thought. On the other hand, this computer is my main form of communication. I would hate to go back to relying on the telephone, a medium I’ve always disliked. Or a real radio, rather than internet radio.
But, I’m going to think about it.

Why Are There No Women Who ...
The Beautiful Game