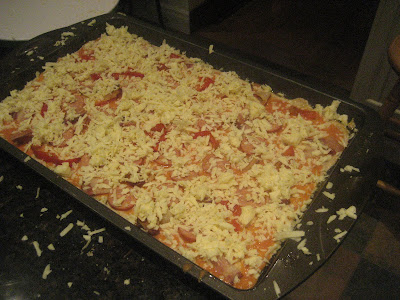 We’re always looking for new ways to include our children in some of the daily routines that keep our household functioning. This is part of my own larger plot to share the burden of unpaid domestic work amongst all the members of the family, as I ease further and further into paid work, again. I would also like to launch my children into the world with a number of useful domestic skills: knowing how to cook and how to shop for nutritious food, how to pick up after themselves, how to entertain themselves, how to notice needs and care for each other. Pretty lofty goals. And it doesn’t feel like we have much time to instill these values and skills into our beloved offspring.
I’ve noticed something: when we write a plan on our large family calendar beside the phone, the plan happens. For a long time, I’ve been dreaming of cooking a meal, once a week, with a child who is old enough to help out (ie. everyone except CJ, right now, though I’ll bet he’d love to try, too). But it’s never actually happened with any regularity. So, I decided to write it on the calendar, oldest to youngest, the next three Saturdays. Yesterday was the first, and because it was on the calendar, Albus took it very seriously–and so did I. Plus, we had a great baking/kitchen day. Apple-Apple started by stirring up and kneading bread dough, almost entirely by herself. Fooey was my cookie-assistant. And Kevin covered the granola-baking while I took two eight-year-old boys shopping for pizza-making supplies. Two boys, because Albus had a friend over and the friend expressed interest in helping out. This turned out to be really really fortuitous and so much fun that I’m thinking maybe Apple-Apple would like to invite a friend to include in her cooking adventure next week.
I’d made the dough in advance–in fact, I used an insanely simple fermented dough recipe that has proved mostly successful in its three outings. (It’s literally: flour, salt, water, and yeast, stirred together and left to ferment on the counter overnight). The first outing was the best, because I didn’t leave time for a second rising on my second attempt. And for pizza dough–it was awesome. So stretchy and moist that the boys were able to spread it on their trays with ease and without assistance. Plus they loved the tactile pleasure of oiling the trays with their hands, smooshing the dough, sprinkling the cheese. An excellent meal choice, Albus. We made tomato sauce in the blender using the same cookbook (My Bread, by Jim Lahey). Can of tomatoes, juice from tomatoes, salt, olive oil, clove of garlic. Rev the engine. Gloop onto the dough and spread with a spoon. Then there was lots of grating of cheese and chopping of pepperoni. I fried the bacon. The red peppers were last summer’s, frozen. We never got to the french fry making, the other item on the menu. Maybe next time.
It was such a fun day of cooking together. And what made it all possible was this knowledge in the back of my head that I didn’t need to find time to vacuum the whole house … because we’re trying out having a cleaning service come in every other week to do a full cleaning. They will dust. I have never dusted. Should I even confess that? They will vacuum. They will wash the floors. I have never washed the wood floors. Again with the confessions. Stop me now.
I will report back on this experiment.
Because they’ll be coming on Wednesday, I am instituting a Tuesday evening tidy and computer time. (Computer time available to those who help with the tidying.) We did a dry run last Tuesday, and Albus was particularly helpful.
Anyway, to sum it up, spreading out the burden of housekeeping freed me up to spend a full day cooking and baking and sharing that time with the whole family. Here’s hoping this experiment will prove sustainable.