I Don’t Want a Blow-Drier 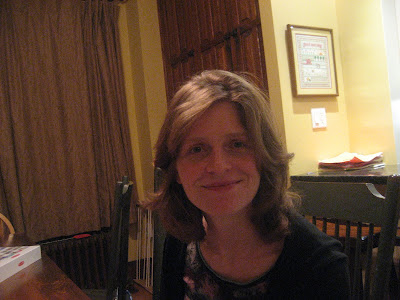 The itch to write exists. But our week is dull and commonplace. No, that’s not being fair to this fine and worthy week among many. In fact, when I think about it, lots is happening that is good and blog-worthy.

Such as: new haircut! AppleApple’s been taking photos in the evening, which we let her do with the caveat that we may erase all/any–so I’ll have to check out her most recent batch to see whether there’s one of Mama-Carrie-post-haircut-and-pre-last-night’s-sleep, because sadly, I can never replicate my hairdresser’s blow-dried look. It would help to have a blow-drier, I do realize that. But I don’t want one. So I’ll be satisfied with the bed-head version and reminisce till the next cut about what was, oh so briefly, my swingy fresh new “Mom” hair. (Note: Have found and duly posted pic, above, but wonder where she found that chin I’m wearing.)
Which reminds me–Fooey has started addressing her parents on a first-name basis. Such as, “Good morning, Carrie!” Um. And good morning to you, too, daughterly acquaintance.
Also blog-worthy: I have not nursed CJ these past two nights. He’s woken and requested the service, but in my overwhelming weariness and desire to sleep more than two hours at a stretch, I have declined. The first night, Kev was still as hockey, so I went in solo, picked up the lad, explained that we would not be nursing till morning, and that it was sleeptime, and then spent approximately twenty minutes gently laying him back down, and waiting beside his crib (we have a method–he knows the method, and he understood the futility of debating at length). He woke at 7, and I brought him into bed to nurse and snuggle before getting up to start our day. Last night, I sent Kevin in. This was rather more painful because CJ kept yelling for me, and because he woke up poor Albus, who shares his room, and also woke up AppleApple who woke up Fooey. Hello, 1:30 in the morning. But within half an hour, everyone was back to sleep, parents included. And CJ slept till 7, again. With a few extra consecutive hours of sleep caressing my brain-cells, I definitely wake with a greater desire to get out of bed in the morning.
But … must get back to work. Make hay while the sun shines. Metaphorically speaking, of course. Out my window it’s a damp grey. Permanently everlastingly grey. Tonight’s my last class. I’ll miss the outing, but perhaps not the preparation required to make it happen. And … what next? Honestly, I haven’t a clue beyond Christmas.
:::
Just remembered that Nina and I each chose a word of the year last January. I’m pretty sure mine was Imagine. I wonder whether that’s been put into use this year, at all. In some ways, I think, yes, it has. I’ve imagined myself doing different things, and have tried out doing them. But much of what I’ve ended up doing seems to fall from the sky in the form of luck and happenstance. And could just as easily drift away. There’s no anticipating this stuff, and no grabbing it either.
:::
Finally, if you scan down the right-hand side of this page, I’ve added a link to my review of Annabel Lyon’s The Golden Mean. Through a connection from my long-ago job at the National Post, I’ve gotten work reviewing a couple of books every month for a magazine called Lake Simcoe Living. More reviews coming soon.
Saturday's Cooking-with-Children Experiment
The Zine