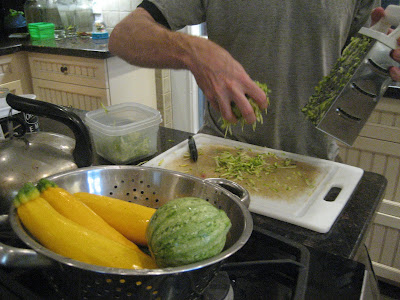 Trying to get up in school-ready time, which is silly because we still have two and a half weeks of summer vacation left; but I want to remind myself that I can do it. And I can. It just makes me want to go to bed earlier. Unfortunately, the children are not going to bed earlier. If anything, they seem incapable of falling asleep before 9:30 at night, no matter when we tuck them in (perhaps we should end the two-week-long sleepover going on in Albus’s room; Apple-Apple is in his loft bed, because she kicks, and Fooey and Albus have been sharing a mattress on the floor, which leaves only enough floorspace for masses of dumped Lego. My thorough cleaning of several weekends ago was decimated almost instantly). Naturally, no matter how active our days, the children still wake up at approximately the same time. This morning it wasn’t their fault. We were all woken by an apparent earthquake, the entire house shuddering on its foundations. It’s still going on. Endless road construction.

:: :: ::
Tomato season seems to be starting only just now; at any rate, my favourite savoury fruit hasn’t been offered in bulk yet at either of our local food sources. Tomatoes loom, and part of me is questioning whether I’ll find the energy and time to do the work when the bushels start rolling in. (I think I can, I think I can). It feels like I haven’t been putting up food at the same pace as last summer, or perhaps not with the same fresh enthusiasm. Because we’ve already filled one freezer, so obviously we are putting food up: mainly blueberries, apricots, peas, and yesterday evening Kevin grated a ton of zucchini (for baking). There is no doubt if we had to live on what I’ve put up, we would not survive; but why am I thinking in these all-or-nothing terms? Instead, why not appreciate how second-nature putting up food has become? Not vast quantities, but little bits here and there. It does add up, and will make our winter more flavourful. There is so much summer bounty, and no way to preserve it perfectly. The way of all things perishable.
Cheery, huh.
This post has been written in the midst of serving children breakfasts and trying to meet their variety of demands (poorly, due to focussing on this posting instead). And now it’s time to hop on bicycles and head to swim lessons.
It's Been a Year
Tomorrow's the Big Day