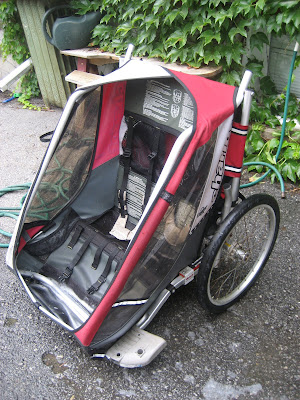 “Bocs, bocs, bocs,” says CJ, and his big siblings go to play blocks with him. CJ is showing such excitement about communicating. I think of him as being a late talker, but in fact he does have words, they just aren’t always immediately recognizable. It gives him great joy to snort like a pig, woof like a dog, run to the door to shout “Dada!” and a sound like haaaaa! that means Hi. I remind myself to explain everything to him (this helps slightly with tantrums), because he understands a great deal. The other night I took all four kids to the little park after supper, riding in the wagon, and CJ took along his talking doll (“didi”). He cradled her all the way there, handed her to me when he wanted to go play, and collected her when I said, “Don’t forget your baby doll!”

Yesterday, of necessity because Kevin had our vehicle, I ran while pushing the stroller, with Albus on his bicycle, all the way to Apple-Apple’s daycamp to pick her up (Kevin had dropped her off in the morning with her bicycle so she could ride home). It’s not a small distance, and I was dreading the errand, while talking it up to the kids as an adventure. We currently have no working way to transport small children via bicycle; so I had to run. New running shoes helped, but what surprised me was that I felt pretty fit. I arrived somewhat red-faced at the daycamp site, but much earlier than anticipated. We took the long way home, stopping by our favourite City Cafe Bakery for a treat. I’m thinking we’ll repeat the experience tomorrow (today we’re combining camp pickup with CSA box pickup, since it’s nearby).
The bike stroller … this is a story that keeps brewing. You will recall that our former stroller was stolen off our porch several weeks ago. Much mourned, then we moved on as friends supplied us with a replacement (for which we’ve yet to purchase a bike hookup). Well. End of story? If only. Last week, our neighbour (the one who gave us a little red wagon awhile back) knocked on the door early in the morning. He’d found our stroller, could we come and confirm that it was ours. Kevin went first, came back ages later looking confused. He thought he’d recognize it, but it was so changed, he wasn’t sure. I didn’t really want to go, but of course this stroller was my fifth baby, and I was the one who’d spent all that time strapping children into it … Fooey went with me. I saw immediately what Kevin meant: it was hard to tell. The fabric was already sun-faded, there was green mould on the inside, it had some new rips and tears, had been stripped of many of its parts. Our neighbour flipped it over to show me the squirrel holes (a squirrel ripped through the bottom seat netting last summer to get at some cookie crumbs; pretty distinctive). Yes, they were there. Then I looked inside at the straps. They hadn’t been adjusted, and were set up, as always, for CJ on the left, Fooey on the right. CJ’s strap was always twisted, I could never figure out how to untwist it, and that was the final confirmation. Our neighbour had quite a story about how he’d recovered it, but suffice it to say the stroller was being used to transport beer bottles and other junk.
I brought it home, though I didn’t want to. The smell that now permeates its fabric is astonishing, and despite a concerted effort by Kevin and me involving bleach, scrub brushing, the hose, plain old soap and water, vinegar, et cetera, the scent doesn’t budge. Though at first we’d thought we could still hook it to our bicycle, I can’t imagine putting my children into this stench, and while scrubbing the other afternoon felt almost murderous rage toward the person who had taken our stroller and ruined it. But that emotion is so fruitless and destructive. Who am I, that I’m so privileged I can throw away the thing stolen and then returned? I wonder if I’m a wasteful person. The stroller’s return has made me reflect on how much easier it is to cope with something that is permanently lost to us; it’s almost as if absolute absence invites acceptance. I was at peace with the loss. It didn’t bug me. Seeing that stroller, what had happened to it, how it had been abused and destroyed, now that bugged me. But I’m not entirely sure why. Is it because I feel an emotional obligation to this wrecked object, an obligation which I resent? Makes me admire the father of the prodigal son who welcomed him back with open arms. Or maybe I’m investing too much emotion, value, and meaning into a Thing.
In any case, for now I will be running instead of biking with children, because it seems wasteful to buy a bike hookup for the new stroller when we have a functioning stroller that we could hook up to the bike; that I will, however, refuse to use. How dumb is that? Except the run was so good yesterday, maybe it’s a fine thing. I find it so much easier to exercise, to make the time, when it’s somehow encorporated into my children’s lives and to their direct benefit. This is why I so enjoyed being pregnant: I could take special care of my body and feel I was taking care of someone else, too. If it’s just for my own benefit, it feels … selfish (and, yah, I get that having a mom who is strong physically and emotionally benefits them too, it just doesn’t compute in the same way; but you’re looking at someone who actually feels guilty using the bathroom some days).
Apparently typing this blog doesn’t apply to the guilt factor.
We are having our back porch ripped down and rebuilt right now. CJ is engrossed. “Will they find any rat’s nests?” Albus wonders.
Blue Sky Getaway
Self-Serving Petition