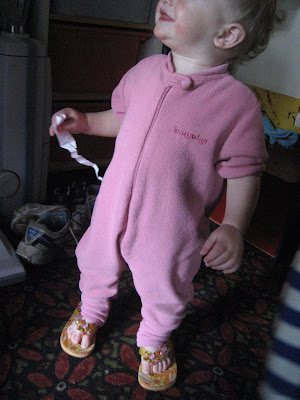 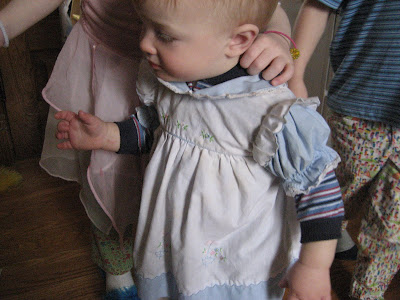 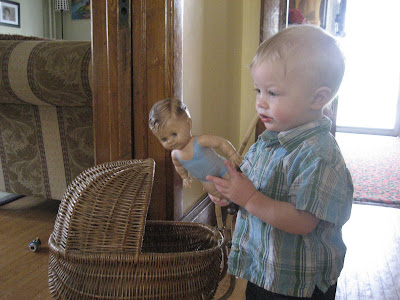 We love him in pink. We love that he’s fascinated by flashy flip-flops, and can walk in them. We love him that he lets his sister and her friend dress him in a dress, without protest. We love that he shows an affection for dollies and buggies. Will he love that we love these things about him, not to mention that we mention it publicly? Will we love that he’s gotten into the garbage and is kicking the container around the kitchen while his doting mama types this post? Will this debatably charming interrogative style annoy or amuse? Will you back away from the glowing screen and serve your long-suffering kids an after-school snack for heaven’s sake, mama? Like, now? 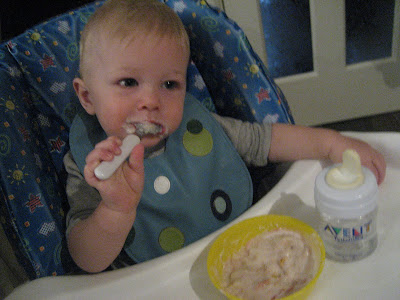 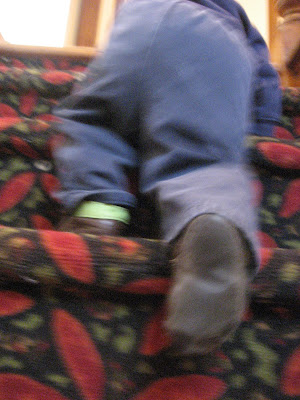 Independence. It’s amazing how our instincts push us toward self-reliance. CJ has turned violently resistant to being spoon-fed. So, earlier this week, we gave him the keys to the cutlery. He proved remarkably adept at transporting food to mouth; and, oh, food is so squishy and mushy and throwable. It’s a winning combination (for him).
The other photo shows him climbing the back stairs, somewhere near the top. He was moving too fast for my camera, and every photo was a blur. He’s yet to master the reverse option, and prefers to stand at the top and shout till his personal escort makes a speedy appearance: (“When the heck did you get up here, you monkey??” “You were blogging, Mama. It was a breeze.”)
Except he hasn’t said “mama” yet, so that last sentence is an obvious forgery. “Dada” he chortles with enthusiasm and accuracy, but mama has yet to roll off his tongue.
He’s almost weaned himself. We’re close. This seems early (I nursed the last two far longer), but I’m taking my cues from him; and honestly, the only time he settles in for a solid nurse is at 3 o’clock in the morning, which I’m used to, but won’t miss terribly. The transition seems worth mourning or marking somehow–having spent the last eight years and eight months either nursing or pregnant, this state of gestation/lactation feels fundamental to my identity; and has been an identity in which I’ve felt so comfortable, so at home. But it feels like a graduation–I’ve earned the degree, and I’m ready to move on to the next challenge.
Whatever that may be. I’ll keep you posted. He hasn’t quite unlatched yet.

Help is on the way! 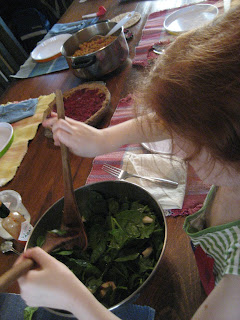 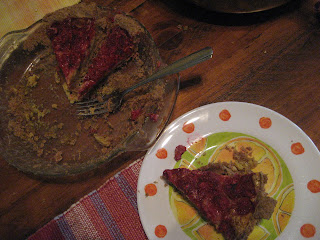 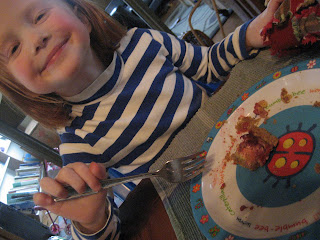 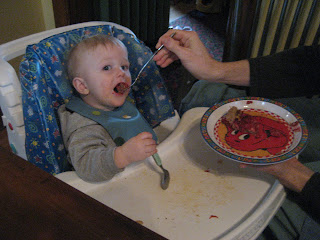 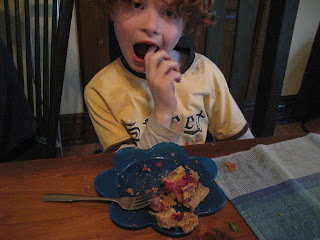 We are grateful to everyone who has offered to run errands, play with children, and otherwise assist our limping family. Thank you! Your phone may be ringing in the very near future …

Tonight’s serendipitous moment arrived at 5. I wrote for part of the day, and didn’t put any thought to supper. Kept putting that thinking off, and off, and off, till it really was suppertime. Suddenly, there was a knock upon the door. Neighbour Nina: “Would this raspberry custard pie fit with your supper plan?” Are you kidding me? This raspberry custard pie IS my supper plan!

Placed pie upon table. Meandered about trying to finish reading through today’s story, chasing CJ up the stairs (aargh, what fabulous timing that new skill is!), while wondering what to add to the pie plan. Finally dug through the fridge, found leftover pasta, leftover sauce, heated those together with the remnants of a veggie broth. Would it be enough? Apple-Apple wanted to help, so I set her to making a spinach salad with sliced apples. Apple-Apple slicing apples! Not fingers, thankfully. We made heaps, Apple-Apple tossed it, too.
And then we ate. Like the loaves and the fishes, we feasted upon what was at hand. I cut the pie into eight pieces. “How many will we each get to eat?” “Is CJ having a piece?” “Let’s say no.” “Oh! Five, so that means three leftover! Perfect! One extra for me and Albus and Fooey.” “Hmm … CJ really likes this pie, too.” “What if we split each extra piece in half?” “Perfect! Six pieces! One extra for everyone!”

At ten months … he’s walking, but can’t stand from a sitting position, so chooses to crawl more often; plus he’s super-crazy-fast on hands and knees. He’s scared of heights. He can climb stairs, but as soon as he gets about four or five up, he freezes. He has no teeth. He’s a natural drummer. He loves to hear singing, and tries to join in. He initiates chasing and peekaboo games which make him laugh hysterically (us too). Makes noises like an engine while pushing cars or trucks. Plays well on his own. Adores his sisters and brother, but likes his own space, and has a special grunting protest noise he makes when one of them is picking him up against his will. Has separate protest noises for: I’m stuck; put me down; I’m mad; someone’s stolen a toy from me. Loves to be outside, even in the snow.

Is crawling down the hallway away from me right now …

Because I blogged about my dad remarrying this weekend, I feel obliged to provide some public follow-up. But the truth is that I can think of nothing to say on the subject that wouldn’t hurt someone. That’s been one of the most interesting, troubling, revelatory discoveries of this whole experience–I mean, the experience of my parents’ marriage breaking up–that sometimes there is no “right.” I think I’d always believed that a problem, any problem, if only given enough creative thought and attention, would eventually yield to a solution.

I had great difficulty sleeping last night (of course, Murphy’s Law, baby CJ slept like a, well, baby, while I tossed and turned, then woke like a real baby the instant sleep arrived for me).

This weekend is Thanksgiving here in Canada. But it’s also the weekend my dad is remarrying. My parents separated about a year and a half ago, and Dad got engaged this May, right around the time my parents’ settlement was finalized. To be brutally honest, it feels rushed, and I’m having difficulty reconciling my emotions with my dad’s desire to have a big happy church wedding with all the hoopla that goes along with that. Grief. Sadness. Loss. Emotions entirely at odds with celebration. I realize this is his wedding, not mine. He is obviously free to do whatever feels right to him. But, then, I should be free too. And that’s what I’m having a hard time figuring out. Is there any way to attend this event while remaining true to my real emotions? If I go, is it okay to cry, to express grief? I’m not planning on going, actually. None of my sibs are either. We just can’t seem to drag ourselves there, though perhaps we all have different reasons for not being able to. My own planned compromise was to attend the reception afterwards, but last night I broke down absolutely weeping at the thought of going, and having to relate, under the circumstances, to the other guests. I’m not a big weeper. In fact, I have never cried over my parents’ dissolved marriage–and you know, it felt really really good. It felt like my body was finally accepting what my head and mouth have been saying for awhile: This is SAD! This is HARD! This is COMPLICATED! And I felt my fear of expressing this sadness, of really feeling it, dissolve as I wept. It didn’t turn out to be something to be afraid of, after all. It felt clean, a clean pure emotion, and that was such a great relief. It actually made me feel like I could, after all, go through with the reception, that I could go with confidence, that I could go and be genuinely expressive of what I’m feeling, while there. If someone were to ask (as seems likely): how are you? I could reply with honesty. Surely it’s okay to step outside the socially acceptable bounds and admit that life doesn’t always fit with the rituals on display. I don’t mean I’m planning to turn into a bucket of tears over the hors d’oeuvres or something equally dramatic, I just mean I’ll be honest. I’ll be honest that my participation in this event is riven with emotions not generally considered appropriate for wedding receptions.

Our family has lost a lot in the past year and a half. I am in the midst of mourning all that has been broken, all that is not reparable. Some things cannot be put back together again. Some brokenness is permanent. Life is deeply deeply sad, sometimes. And it’s okay to feel that, to know that, and to express that. I’ve no interest in wallowing in it. Life goes on. But it feels like the right time to reflect on this sadness. This Thanksgiving I will be giving thanks for the human ability to grieve, to feel, to mourn, and also, as in the last post, to Move.