Draw your own tiger 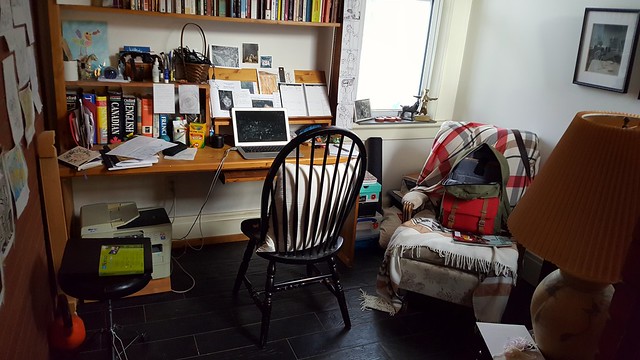 How often do you sit and draw in public? Or sit and write in public? Can you imagine sitting and colouring in a child’s colouring book in public? That was the first task I set for my students this week. Most students completed it. I did too.

And as I sat at my daughter’s violin lesson, crayoning colour onto a rabbit (who was wearing running gear) chasing a rooster (who was not wearing running gear), I kept hoping no one would notice. As soon as someone did, I felt compelled to explain: this is an assignment for blah blah blah. See, actually, I’m not flaky or weird. I’m doing this for a legitimate reason.

Because colouring rabbits and roosters with crayons is not legit all on its own.

Why not? Because I’m not a child.

I don’t know where that came from — well, I do: 1 Corinthians, chapter 13, verse 11 — but the words just popped into my head, and I want to rebel! I will not put away childish things! 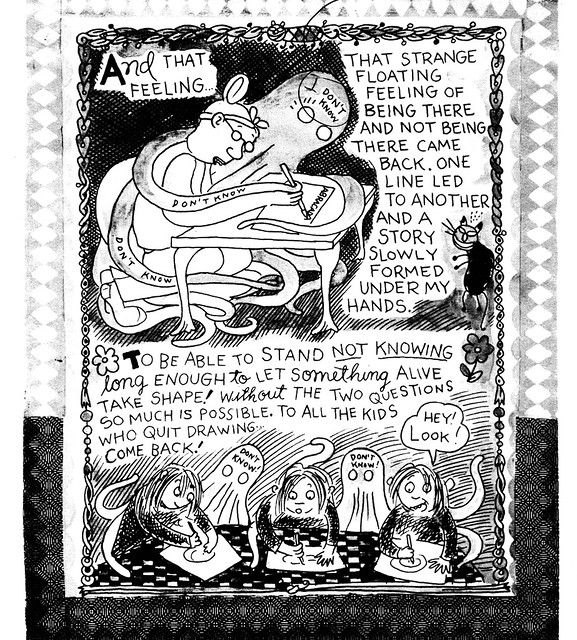 from Lynda Barry’s What It Is

… To be able to stand not knowing long enough to let something alive take shape!

The two questions Lynda Barry is referring to, in her cartoon, above, are the ones we’re always asking ourselves, the ones that pop into our brains unbidden and stop us from making things: Does this suck or is this good? If it sucks, why bother? If it’s good, what’s it gonna do for me?

You can’t really stop yourself from asking those questions. I mean, the critical brain has its uses. But you can find an answer that will quiet both questions.

The answer is: I don’t know. But I’m doing it anyway.

It’s only week one, but already the work my students are showing me is blowing my mind. I’m seeing in many of them this huge appetite to make things. Like they’ve been waiting for someone to come along and tell them to make things. And these things, these amazing, expressive, funny, sad, wild things are just waiting inside of them to be made. 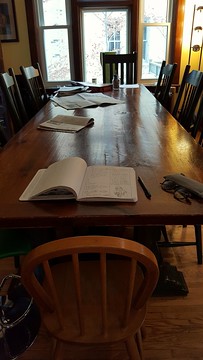 I’ve never coloured in a public place before, though I often write and draw in public. In order to do this, I claim a built-in excuse: I’m a writer! What a privilege it is to give myself that kind of permission — permission to do these fundamentally embarrassing tasks in public.

Why embarrassing? Because someone might look at what I’m making? A little bit, maybe.

Because no one else is doing it? A little bit, maybe.

Because making things is kind of pretentious, while also being kind of childish? Ah. Yes. That.

At night, our brains dream, constructing metaphors out of images from our daily lives, whether or not we are aware of this activity. And our waking bodies and minds want to do this too — to construct meaning from the material that surrounds us, and that we carry in us. We want also, joyfully and freely, to play. To wonder. To be here and not here. To lose track of time because we’re so occupied by our task.

This is not merely a childish desire, it is a human desire, it propels us and compels us, and sometimes it makes us sick and sad and unhappy, when we bottle it up or it struggles within us, unrecognized.

The desire to make things, to express our creativity, is fundamental. It is human. 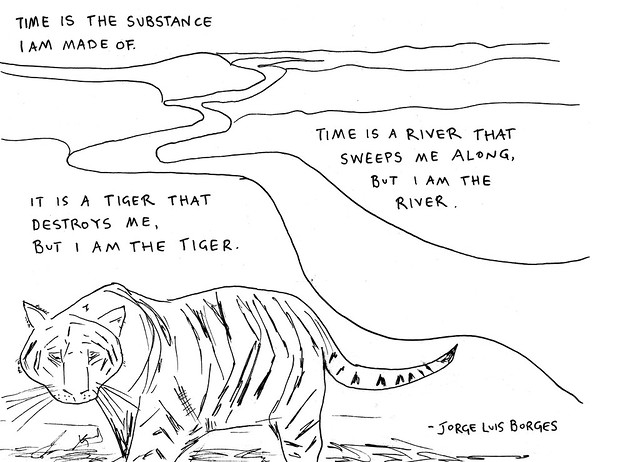 On the page with the running rabbit and rooster, I coloured the leaves on the tree green — didn’t even think, just reached for green. Why green? I thought, pressing the crayon into the soft paper, feeling a bit annoyed with myself. Does the grass need to be green, too, and the sky blue? I found pleasure in choosing magenta for the tree’s trunk. But my flowers were yellow. I wanted everything to look pretty. In the end, I wasn’t satisfied with the colours I’d chosen, but I wrote my name at the bottom in purple block letters. A child would turn the page and start colouring another picture.

Do you need permission to do this too? If it helps, you can say that I told you to. Make things. Colour in public. Draw your own tiger. You have permission. You always, always have permission.