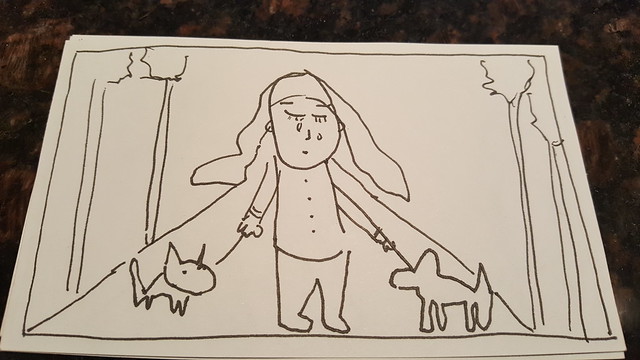 Today has not been the kind of day that I would call productive.

I’m sitting here with a marked-up manuscript at my elbow that is calling out for revision, for new scenes to be written, for work and attention and focus. I’m at the point in this project where I keep thinking, Don’t let me die before it’s done! Which makes me reflect on the courageous creativity of people who know their time is limited, like Gord Downie, who, in his final year-and-a-bit, wrote and sang the songs he knew he needed to share with those he loved. There is a real terror that the end will come before you’ve finished the work you intended to do. That terror is real.

And yet, I’m sitting here and have not dug in. On Saturday I spent nine hours glued to my desk, working on this book. Total luxury. Today, I’ve been unable to manufacture focus.

My mind is elsewhere …

As some of you may know, we have two dogs. They came to us as a mismatched pair, rescue dogs who were found, abandoned, wearing matching pink sweaters in the middle of freezing February in an industrial Ohio town. How they survived even a few hours in the “wild” I’ll never know, as they are almost entirely lacking in good sense. They were then impounded and doomed, only to be rescued by a Canadian group, who subsequently struggled to adopt them out as a pair … until we came along. We’ve had this motley pair in our home for more than five years. It took the dogs at least two years to settle in and fully trust us. Suzi still wakes up and begins howling around 5AM every morning. One of the challenges of caring for rescued animals is that their histories are unknown; even their ages are unknown. What we do know is heartbreaking: they were abandoned.

More than a year ago, DJ was diagnosed with cancer. Luckily, it’s slow-growing and she continues to enjoy life, eating well, going for walks, even while there are signs of her illness’s progression in her body. Today, we received news that it is highly probable that Suzi has cancer too, but hers appears more aggressive.

Truth is, I’m pretty broken up.

This is what I’m thinking about as my book waits by my elbow. Two little dogs.

I’m thinking about how a dog doesn’t have a mission in life, or not an articulated mission, not a mission in the sense that we invent such things; a dog doesn’t need a mission to enjoy its time here on earth, from what I’ve observed. A dog thrives on routine, loves food, and is highly attuned to the humans with whom it interacts. A dog can greet you at the door better than anyone. A dog is also reliant on the kindness of those who care for it; and therefore like all innocent creatures a dog is vulnerable to mistreatment and abandonment. It breaks the heart, as I’ve said. We’ve tried to imagine our dogs’ lives before they came into ours; we’ve tried to imagine them as adorable puppies; we wonder when they first met, and why they got along (two female dogs usually don’t bond like this). We’ve also fictionalized them in our imaginations, turning them into doggie detectives (more lucky than bright), and, most recently, cartoon super heroes (DJ’s superpower is her terrible breath, Suzi’s is her ear-piercing whine). Maybe I’ll write them into a book, someday, who knows. If there’s time.

This post feels too close to eulogy. The dogs are sleeping under the table, near my feet. They’re still here. Today is today. Pet your doggies while you may.

Notebook work: write while looking out of a window (15 mins)
Screens and silence