And then we rented a dumpster 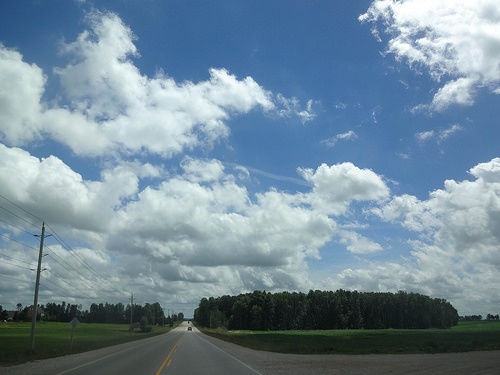 I seem to be happiest when in motion. I can’t say why this is, but contentment seems to derive from a sense of continuing, a stream of mostly humble activities rolling one in the next into the next, overlapping, flowing always forward and pulling me along.

I ward it off with projects and lists, with the demands of parenting, and the urgency of getting to the right place at the right time.

This sense of urgency can make me feel drawn, tense, running on pure adrenalin. Or, oddly, it can make me feel calm, serene, like I’m being swept along rather than having to propel myself. This summer feels like a bit of both, but mostly, I’ve been feeling calm about where I’m at. I’ve been feeling buoyed and buoyant and not overwhelmed, even as I’m whirled from task to task.

Kevin and I accomplished something major on the weekend. We rented a dumpster and cleared eleven years of why-are-we-keeping-this junk from our attic, basement, garage, and many closets and cupboards. We filled it to the top. It felt cathartic and it was a ton of labour, squeezed in around three soccer games on Saturday (only we would think a mere three soccer games on a Saturday is an invitation to rent a dumpster), a long run on Sunday morning (me), and a soccer practice on Sunday evening. The resulting purge of possessions was like preparing for a move, without the necessity of actually moving anywhere.

My conclusion: we should do this at least once a decade. I’ll put it on my to-do list for 2024.

And the things we got rid of. I put anything that looked even moderately appealing out on the curb. We may have a hoarder in our neighbourhood because boy, did items go fast. At one point, I set out a miniature crockpot, then realized it was threatening to rain. “I’ll just bring that up on the porch for now,” thought I, heading back out for the rescue — but it was already gone. Vanished. It felt quite remarkable, like discovering a black hole or something, a vacancy down which to toss all those things that still seemed useful, not junk, but no longer wanted by us. I imagine it, now, somewhere nearby, stuffed into the corners of someone else’s life, while our lives are somehow lightened by the space that’s been cleared.

On the schedule this week …
one child at musical theatre camp, with performances on Friday
one child at horse camp
several soccer practices + four games
one story contest to help judge (done, this morning!)
one book launch party to plan
many kilometres to run (training for the Run for the Toad in October)
one wedding to celebrate (my little sister Edna is getting married! and I get to call her little because she’s twelve and a half years younger than me)

On, on, on we go. Even when I’m really tired, I feel the tidal pull, carrying me along, and I’m glad for it. I’m glad for being at a stage in my career where I’m being invited to participate. You won’t catch me complaining about being too busy. It means: wealth of experiences. It means: my cup runneth over. It means, for me, a constant source of replenishment.