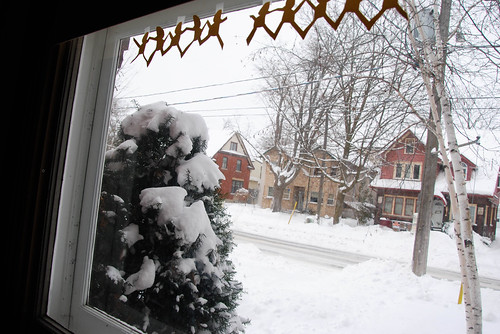 A habit I’m reinstating: yoga, once a week. I went to a free class on my birthday, and renewed my commitment to practice more regularly, and not just in my office (although that counts too, and is valuable). I like being pushed, in a class setting, to hold poses longer than comfortable. I like the community feeling, too. And I’ve become excellent at savasana. I’m serious! When I started practicing yoga, four years ago, I hated lying in the final pose, and had to force myself to be still and stay in the room. I was absolutely itching to get up and get going — after all, the hard work was done; what was the point of lying around?

Now I open my eyes and think, Uh-oh, there are only two people left in here, and the next class is waiting to get in. And while I haven’t been asleep in savasana, I have been away. It’s that away-ness, that emptying out, that I’m committing to again this year. I remind myself, again, that I can’t grab for things; that isn’t how it works. The things that are truly worthwhile arrive, alight like the gifts they are. The moments we live for. I’m not saying sit back and relax while the universe takes care of everything. I’m saying, prepare yourself always for these moments of grace, and recognize them when they come. That’s all. Choose work you love, if you can, so that the process always seems to be renewing and refreshing itself, so you’ll always have more to learn, so you’ll stay curious and engaged.

After yesterday’s class, I found myself reflecting on the word “discernment.” (Fellow Mennonites are likely to be familiar with this word.) It’s a word I’ve long disliked. At worst, I suspect it of being code for “refusal to decide” or “failure to take a stand” or “terminal wishy-washyness” or “paralysis of purpose.” (Can you tell I would flunk at committee meetings?) I’m not against reflection or debate or consideration. But at a certain point — and who’s to say when this is? — the discernment must end and the decision-making begin.

Or maybe that’s my problem with discernment. Maybe I don’t like for discernment to be artificially separated out from action. Maybe the way I figure things out is to do, to try, to practice, to hash it out along the way, to stuff my foot in my mouth from time to time and learn the hard way. Maybe I believe less in coming around to clarity, than in going on gut and whim and instinct. I really don’t know. Too many questions, too much guilt, too much worry about being politically correct or causing offence, and I grind to a halt, afraid to do or try or say anything. But the opposite of discernment is Rob Ford: shameless empty entitled belligerent self-pitying posturing. There’s got to be a middle ground. There’s got to be a way to be in this world that is considerate and out-spoken, compassionate and practical, whole and vulnerable, open and strong, clear and welcoming, thoughtful and active.

There’s got to be.

That’s my savasana reflection, from January 9th, 2014. Perhaps this will be the first in a small, ongoing series.

When lost and frustrated ...
This room of my own