New year all over again 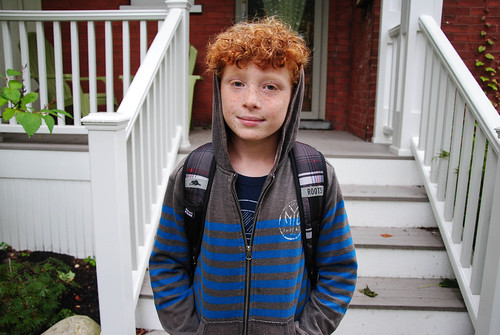 ALBUS Started yesterday. Grade seven. Junior high. New school, starts earlier, ends earlier. Walking with friends. Returned home excited, likes the idea of moving around from classroom to classroom, subject to subject, having a variety of teachers. Likes his locker’s colour and location. Did not jump on my idea of decorating it. His main worry: that he might be late for class and get detention due to being unable to open his lock. Not reassured by parents telling him this is not, generally speaking, a leading reason students get detention. Practiced piano as soon as he got home. Had no homework. 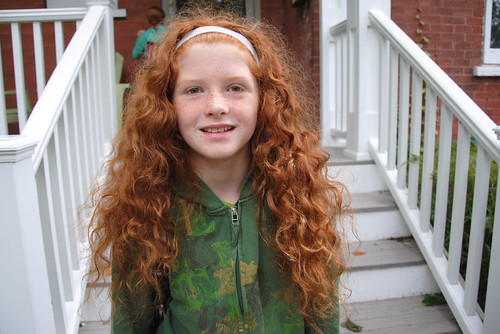 APPLE-APPLE Started yesterday. Grade six. Same school as last year, same classroom, same teacher, same classmates her age. There are new grade five classmates added to the mix, so that’s the only real difference. One of the new students is a soccer-loving girl! So that’s different too. They played soccer together during recess, and today she took her own ball to school, as the school’s ball is flat. Did her homework as soon as she got home. Also, I brushed her hair in the morning while she was practicing piano. She didn’t object in the least. (But I didn’t have time to brush it again this morning.) 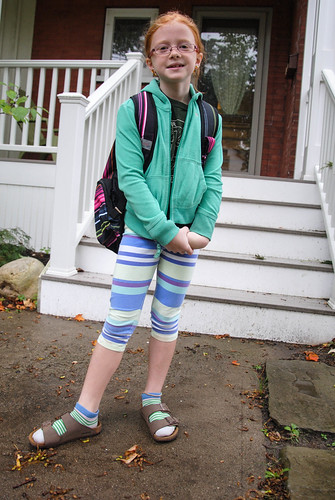 FOOEY Started yesterday. Grade three. Same school, same wake time (7:25!), same exit time. Walking with friends and brother. Returned home satisfied with first day, reporting that she’s in her former kindergarten classroom (there is a new wing of brand-new classrooms for the all-day, every-day kindergartners). Went directly to a friend’s house after school to play. I did not, therefore, get a full and immediate report. But she did play the piano after supper: she didn’t want to practice, just noodle on a particular song that we could play together. That was nice. (And I just had to show her carefully chosen outfit in full!) 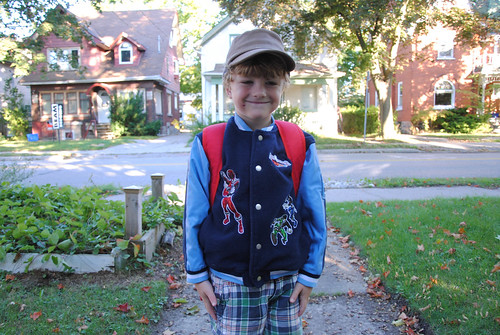 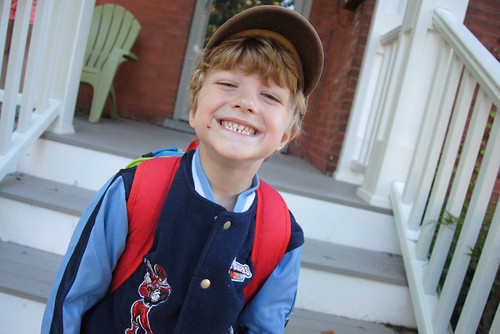 CJ Look at this guy! He started this morning. Senior kindergarten. Will get to school using a combination of bus and walking. Gave me lots of hugs and kisses and waves as we waited outside the new kindergarten wing. There were six kindergarten classes going in, a huge crowd. His best friend is with him. He said he was excited. I came home and cried my eyes out. Can I admit that?

Now, here are some out-takes from this morning’s shoot. 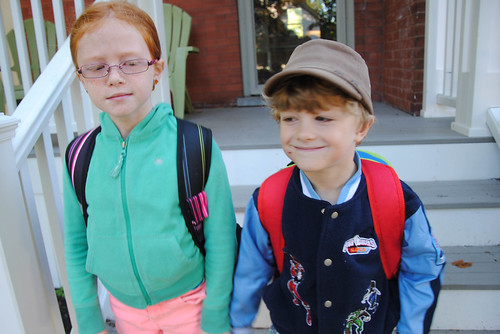 I am making them hold hands. Ha! 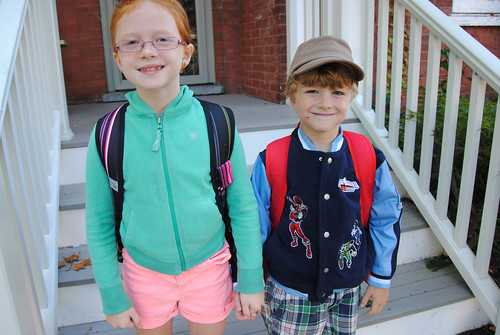 We’re holding hands, we’re smiling. Are we done yet? 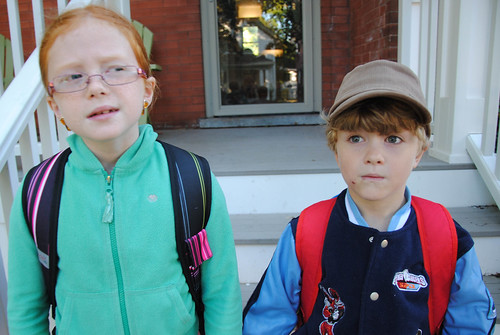 Seriously, Mom. Are we done? 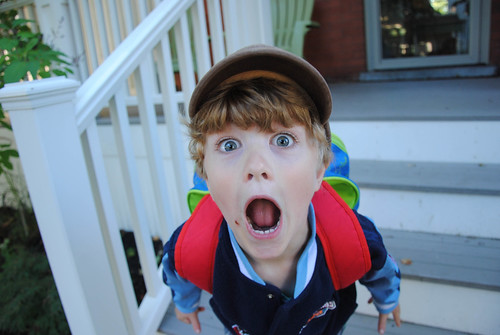 Wait! How did that one look? Let me see, let me see!

And the school year begins again. And here I sit alone (save for my doggie companions, who think this office actually belongs to them), in quiet, if not at peace. Too much happening, too much to prep for, too much I can’t prep for, can only plunge into. The good news is, I’ve been able to get up early-ish to run these past two mornings, and my head doesn’t hurt. The bad news is, even during these happy running moments my mind is turning over and over in restless sifting of must-dos and worries. I think of running as a curative for my restless mind, but sometimes the mind doesn’t want its rest, or refuses to take it. I’m not fighting it because there must some purpose to it, some need it is meeting. I’m not fighting it because life has its rhythm of cycles, of tides, of pull, and rest will come again, I know.