How to turn supper into a competitive sport 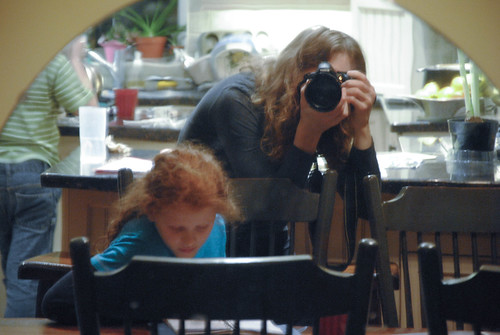 Kevin and I have stumbled onto a way to make cooking fun again.

It all began the first week of January. Kids were still off school, but we wanted to get back to work. So we split our days. I took the morning kid-shift, he took the afternoons; but afternoons meant suppers too. I relinquished my iron hold over kitchen proceedings, and introduced him to The Joy of Cooking, and he liked it. A lot.

We did have Yorkshire puddings two nights in a row because the first recipe didn’t replicate his childhood memory of his mother’s version. Sadly, neither did the second recipe. After which, he moved on to a traditional shepherd’s pie. Getting in touch with his British Isle roots. (What if he attempts blood pudding??) I must add that he also solicited advice from me, which I appreciated. Because I was practically itching to give it.

I found that the brief break inspired me to cook with more enthusiasm, and, I’ll admit it, a faint stirring of competition. Nothing like a little challenge to get me inspired.

I’ve already been creamed by the competition, according to our four-year-old. Kevin prepared leftover noodles with cheese sauce on Saturday evening, and, to repeat a story I already told on Facebook, here’s how that went over:

CJ: Who made this supper?
Kevin: I did.
CJ: This supper is awesome! *holds out arms for hug*
Me: Are you serious? I’m going to cry.

Please note: I have never, not once, received a spontaneous hug for any meal I have set upon the table. A more common response would be:

“Why do you always make food that I hate?”

I have been preparing said meals for eleven-and-a-half years. That’s, like, 4000 meals.

We’ve decided to up the stakes.

Inspired by a friend who is going on sabbatical this summer, and who is chronicling her attempts to “eat down the freezer and cupboards,” Kevin and I have decided to prepare meals using all those edible odds and ends that dwell, untouched and neglected, in our own cupboards and freezers. (I suspect there’s some weird survivalist instinct in me that wants to save the stored food, in case of apocalyptic circumstances; in any case, we have a lot, and we could probably reduce our monthly grocery bill by making better use of it. Worth a try.)

* I started on Monday with a meal of quinoa (cupboard), spelt (cupboard), and brown rice (cupboard) salad with roasted red beets (leftover), and a corn (frozen) and potato (cold cellar) chowder (broth from freezer) with bacon (freezer). For bedtime snack, we opened a jar of pearsauce (cupboard) and served it with yogurt.

* Last night, Kevin made us a spinach (freezer) gorgonzola sauce with bacon (leftover), mushrooms (lingering), and shrimp (freezer), over pasta. He wisely prepared a separate cheese sauce for the children who didn’t want the fancy bits, making him, once again, most popular chef with the four-year-old set. (Pandering! I refuse to stoop to such tactics!)

The opposite of indomitable
Swimming studies, early morning, girl in green