Ring your bell, ring it loud 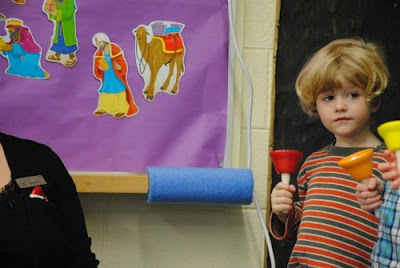 Good morning. Good rainy dark pre-solstice morning. So dark, the bus picked up AppleApple in what appeared to be the pre-dawn. At our house, at this time of year, everyone takes vitamin D and fish oil. Yes, I make my children take fish oil. Nobody objects. CJ actually came running for his fish oil this morning. Here he is, waiting patiently to ring his bell during his Christmas concert yesterday.

He’s not the only one in the family ready to ring some bells and make some noise.

At supper last night the conversation ranged. It started with the weather. Albus and friends had rescued their snow fort from the rain, but it was dwindling. “It’s going to be 11 degrees tomorrow,” he reported. “Why is this happening?” “Climate change?” I mentioned an article I’d read about giant plumes of methane gas bubbling out of the Arctic Sea. We talked about Canada’s government withdrawing from the Kyoto accord. We talked about the oil sands. We talked about the power of money. We talked about weather versus climate. AppleApple worried: what could she do?

My suggestion: start by sending a letter to our federal environment minister, Peter Kent, a former television journalist who in fact reported in great detail on the emerging science of climate change way back in 1984 (the internet is useful for so many things). I write a lot of letters. It’s one of the few things I can think of to do and I’ve been doing it since childhood. In fact, in 1987, aged twelve and in homeschool, I was upset and disturbed about the effects of greenhouse gases on our environment, and wrote to then-environment-minister, also in a Conservative government, Lucien Bouchard. I received in return a large package in the mail some little while later: glossy pages of activities and suggestions (turn off the tap when you brush your teeth!). No actual response to the questions raised in my letter. I was disgusted by the obvious waste, and the irony: the ministry of the environment producing glossy reams of paper, essentially propaganda. (My parents were peace activists, so yes, I knew about propaganda.)

And so, our dinner conversation turned to propaganda. We talked about how we humans like to fool ourselves. We like to comfort ourselves, and distract ourselves from news that would make us sad or worried. (Which would explain why celebrities are a bigger “news” draw than actual news.) And then the conversation got really funny. Albus didn’t get the concept: How could we fool ourselves?

Hm. Pretty sure you’re a master at it, Mister “It Was an Accident” Albus. We all admitted familiarity with that sickish feeling when you know you’ve done something wrong. Around the table, almost unanimously, we discovered that that feeling arises more often when we’ve done something wrong by accident, and less often when we’ve been deliberately bad. (Maybe when we do something deliberate we’ve already built up the rationale around why we’re doing it; we’ve already bought into the wrong-doing; cough-cough “ethical” oil sands cough-cough.)

AppleApple decided to research climate change–what we can do, what the government could be doing. She wants her ducks in order before she writes her letter. She wants INFORMATION and FACTS. Maybe we’ll all write letters (you, too?). Albus also suggested that we could have a protest. Hey, good idea, grandkid of activists. Protests are in the air. The Protestor was just named Time magazine’s Person of the Year.

But as I watch cars stream past my house this morning, as I myself turn to my vehicle in the cold and the rain, as I consider how we are creatures of cultural habits and patterns (currently reading Malcolm Gladwell’s Outliers), as I tap out these words … I wonder how to answer AppleApple’s anxious question: What can she do? Is there anything we can really do? Really? Beyond hope and pray and protest and write and try and hope some more? Life is so damn short. A second ago I was twelve; blink, and my daughter is nine–and what’s changed?

But that’s not how the conversation ended last night. Somehow, it ended with us going around the table taking turns trying to fake laugh. You should try this at home. In fact, you must. Don’t think about it too hard; just give it a shot. It will give you hope. Because even the most ridiculous half-hearted attempt will turn genuine in about two seconds when everyone else joins in.

Christmas shopping: Is there a lesson in here somewhere?
The creative life: dig in