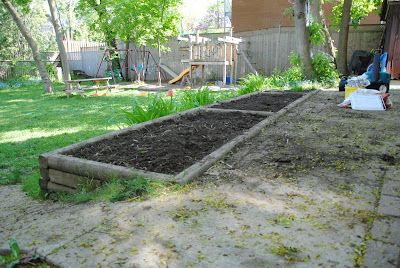 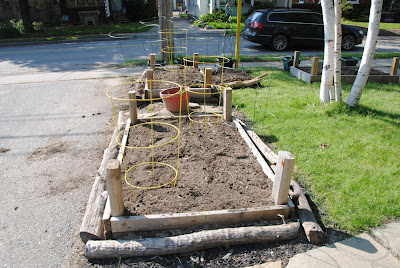 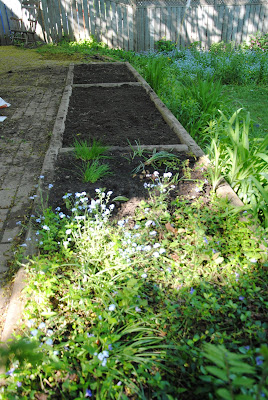 This is what we were working on last weekend, on the day before the duathlon. It’s hard to fathom, after a week of storms and rain and grey, that a day could be so sunny. I got to get my hands dirty, digging up the big beds in the backyard. It’s never too late to discover a love for gardening. We’re enriching the soil even more this year, and hoping to grow potatoes and kale despite the shade. In the front yard, Kevin’s put in strawberries and flowers, and we’re planning to add tomatoes and cucumbers this weekend. I will also have some herb pots around the side of the house where the sun falls strongest (when it falls at all, which currently feels a bit like never).

This post is a little gift to myself while I take a lunch break from other writing work. I’ve been longing to get on here all week to write about such exciting topics as: urban homesteading, and running with children (not quite the same as running with scissors). We’ve got big plans this year, for this brief and precious summer season (as always).

We are planning to take down a few trees to gain sunlight for more vegetable gardens, and possibly a greenhouse (advice, anyone?). We hope to dry and plane the wood for further projects. We’d like to build a trellis over the patio, for grapevines and prettiness. We have a treehouse plan in the works. And a chicken coop. Then there’s the porch project, with room for my teeny-tiny perfect office (architectural drawings already underway!).

Earlier this week, I got to do something especially thrilling: I jogged with my kids. I have such wonderful memories of jogging with my dad, probably from about the age of seven. On longer runs, I would ride my bike. So last Sunday morning, in preparation for the duathlon (and because, after a long and tired week, I needed to remind myself that I knew what I was doing), I went for a short run around the neighbourhood. AppleApple was hanging around, bored, so I suggested she join me on her bicycle. Off we went on a 4km jaunt, me with a grin wider than a river. We talked about running, and I reminisced about my childhood jogs, and she said she’d like to try running with me, so Kevin and I decided to work it into this week’s schedule.

Wednesday morning I get up early to run with a friend; we’re usually home by 6:45 or so. This Wednesday, we laid out the two eldest kids’ running clothes, and Kevin set his alarm for 6:50, and the kids were set and ready to go by 7. I grabbed a drink and headed back out with my kids. The light was beautiful. I promised we’d go exactly 1 kilometre (which seemed like a long way to Albus). We chugged through that kilometre in about six minutes. AppleApple was keen for a second kilometre, so we said goodbye to Albus (red-faced, and proud of his run), and went around the loop again. She ran fast! We even sprinted at the finish (something I always like to do).

We plan to do the same tomorrow morning: the kids can join me for the first kilometre or two of my long run. And we hope to keep up the habit, twice a week, in the weeks to come.

It was such a good start to the day. Both kids were energized and in great moods. AppleApple said she felt like she was floating afterward. Me, too. It’s such a privilege, as a parent, to get to watch your children grow in skill and develop interests, and to encourage them to excel and to find courage and strength.

If you’re following my triathlon journey on chatelaine.com, here’s a link to the latest story, on what it really costs (literally, in dollar figures) to train for and race in a triathlon.

Day of duathlon
On being competitive