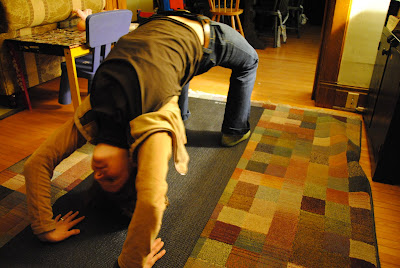 Thursday is family meeting night. This past Thursday, Albus had evening social plans, so I assumed we’d find another night instead; but plans got cancelled, so I said to the kids on the way home from swim lessons that we could have our family meeting as usual. But it turned out that the evening unfolded slowly. We walked through the door with swim gear, school gear, snow pants, and the noisy unhappiness that seems to arise during every transition. I had to throw supper together (pasta, red sauce from the freezer with hamburger, also from the freezer, neither completely thawed; plus salad and dressing). Kevin worked later than usual (software development in its final stages–we hope). And then we had a lovely surprise just as we were sitting down to our late supper (late for us is 6pm): Nina happened by with the gift of a banana cake with peanut butter frosting! Over supper, we had a funny conversation about dessert: how some families eat dessert virtually every night (does yours, out of curiosity?). We rarely eat dessert, and if we do, it becomes bedtime snack. Dessert is for birthdays, company, and, now, family meetings. I took a poll: who would like to have dessert right after supper tonight? Uh, everyone, obviously. So we all licked our forks, cleared our plates, and I served up six gigantic slices of banana cake. It was very jolly indeed. So jolly that I briefly contemplated making and serving dessert every night after supper (don’t tell the kids). But by the time we’d gotten the dishes done, the school lunches made, and a few baths taken, it was very very very late–bedtime, in fact. CJ was beside himself, having scorned all opportunities to nap. The older children were also in full-on meltdown mode. Being asked to brush their teeth sent several of them into screaming fits. Kevin and I looked at each other: it’s too late–no family meeting tonight.
No family meeting????? The screams and howls rose to fever pitch.
I thought they just wanted the ice cream. But it turned out, when I was able to calm them enough to put the question to them, that it was the meeting they wanted. They would forgo the ice cream as long as we had the FAMILY MEETING. How could we turn them down? (Don’t ask Kevin–he would have found a way. The Canadian women were in the middle of playing in the gold medal hockey game against the United States, and he suffered greatly through the meeting that followed). We gathered on the couch in the living-room so that I could nurse CJ and snuggle Fooey, who was exhausted. The two older children took the lead. Albus was chairperson, and AppleApple was secretary. The entire meeting followed an agenda proposed by them. We discussed cooking this weekend, and other weekend plans. We discussed the kids’ plan to sleep in the basement together on Saturday night (ie. tonight–wish us luck!) and who would sleep where (CJ in the playpen, and AppleApple will carry him up to Mommy if he wakes up in the night and needs a nurse–AppleApple’s plan). We discussed Albus’s recital on Sunday, to which he has been instructed not to wear jeans or sweat pants–horrors! (He suggested wearing sports pants–you know, the super tight, shiny athletic pants that I can just see his piano teacher staring at in askance; when that option was rejected by his mother, he said, okay, then, pajama pants. His teacher hadn’t said anything specifically against pajama pants. Oooooookaaaaay. Deep breath). At this point in the meeting, Kevin looked like he was about to run out of the room–in fact, I’m pretty sure he did manage to slip out to check the score on the screen in the kitchen.
As a final item, AppleApple introduced the topic of: Summer! What camps might they go to, what plans are we making, et cetera. She and Albus were utterly serious and concentrated, but quite honestly, Kevin and I were almost beside ourselves with impatience, which makes me laugh now. Even at the time, I was laughing on the inside, proud of them, and rolling my eyes at myself. I’ve created a monster! But a good monster. A monster that insists on talking things through no matter the circumstances. Still, I had to get the two youngest kids off to bed before they imploded on my lap. So I asked Kevin to introduce a motion to end the meeting.
“Meeting’s over!” he said.
“That’s not how you introduce a motion.”
A vote was taken, and four of us raised our hands to close the meeting. The two older children were moderately accepting, but thought we should have talked longer.
Honestly, these Olympics. I love them, but I need more sleep. I’ve been up till about midnight every night for the past two weeks in order to witness can’t-miss moments–so many of which were worthwhile witnessing, and I’m grateful for the inspiration, the excitement, the displays of athleticism and courage. But I’m looking forward to an early bedtime. Starting Monday.
:::
Today is an unusual day for me. Starting at 3pm, I’m heading into a yoga marathon, of sorts. First, I’m trying out a “hip-hop” yoga class with several friends. It’s a two hour class and I hope it doesn’t destroy me physically, because later tonight I’m also going to Kasia’s kundalini yoga, in her beautiful, warm–and tonight, likely, crowded–studio. Last month’s class was mind-blowing, physically challenging and rewarding. I’m praying that I’m up for it. Here’s hoping for some Olympic strength by osmosis. (Though, frankly, curled on the couch in a state of sleep deprivation may not be the best method of physically conditioning oneself for feats of strength).