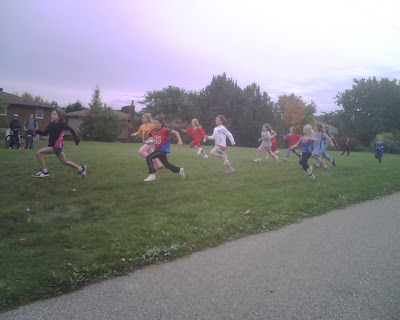 Nope, that’s not Apple-Apple striding ahead out in front, in her very first running race ever; there she is, that very small figure most decidedly bringing up the rear. This was at the start of the 2.3 km race, and we had instructed her to pace herself. Which she did. “I was really exhausted because it was the farthest I’ve ever run, but when I saw the finish line I felt so excited that I forgot that my body was so exhausted and I sprinted as fast as I could!” She came in sixth in a field of about twelve seven-year-olds; interestingly, she will run in the same field next year, as she’s still only six. (But there is no six-year-old category). Albus–also pacing himself–also headed out in dead last, then worked his way somewhere closer to mid-pack, at 41st. There was some debate about the size of his field. Suffice it to say, he felt supremely pleased with his performance. And the parents were equally pleased.
This was a Kevin-in-charge event, and I received all reports via texts, as I was on my way to class. It was called a “Fun Run,” and Kevin and the kids were under the misapprehension that it would involve a jog around another school with their running club (or something of the sort), when instead it was a mini-cross-country meet, with loads of kids from other local schools, loud music playing, coaches readying their charges, nervous excitement, wearing your school’s shirt. Kevin said even if he’d known it was a cross-country meet, it wouldn’t have made a difference, because in his experience (rural living), cross country meets only involved, at most, fifty kids total.
Next time, we’ll dress the children in race-appropriate clothing. Apple-Apple was wearing a button-up shirt, for example. This is what happens when we co-parent. But it’s small stuff compared to the overall payoff, which, this fall, has meant that I get to say “yes” to more opportunities.
This past week, I was fortunate enough to doula at another birth, this time a friend’s–in fact, my first friend-birth (the others were people not known to me previously). It was, as it has been on each occasion, a revelatory experience, a true gift, the kind of experience that doesn’t translate easily into words–even for me. I drove home thinking, I must do this again, how can I do this again? I’m focussing my research paper on midwifery, generally, and have been reading a variety of texts, including a manual from 1671 written by a midwife; for some reason, this subject remains deeply interesting to me. I know this isn’t the case with a lot of topics, so it feels like I’ve struck on something that resonates core-deep. If I were to pursue a doctorate now, I suspect it would relate to midwifery in some fundamental way. But I don’t think doctorate is where this interest will take me. I can’t see the destination clearly. Maybe I don’t need one right now; maybe this journey, this process, this research and continuing hands-on experience is enough.
My other great pleasure this fall has been a renewed appreciation for writing. (Though it’s been almost entirely non-fiction. Hmm).
Speaking of writing (though in this case, writing fiction), I’ve just discovered that The New Quarterly has posted a sneak preview of their upcoming, soon-to-be-available fall edition, featuring my Juliet stories. Take a look! Those are my cows on the beach on the front!
:::
Oh, and here’s the info on the Oct. 22nd reading related to those stories, though, yikes! As soon as I saw it, my heart started to beat about twice as fast. It’s been awhile since I’ve done a reading …
Improvised Triple Stroller
Book Me