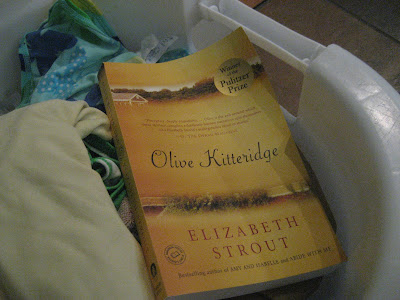 Ten years, and it does feel significant. Kevin and I have been enjoying reminiscing about our day, remembering where we were, who we were with, all of the happy emotions, and marvelling at the fruits of our marriage (four of them, specifically). Check back later, because I plan to post some scanned photos from way back then (though, honestly, it doesn’t feel that long ago, it feels like the blink of a cosmic eye).

The best part of today was this lovely surprise: Kevin arriving just after us at the Rec Centre, where the kids take swim lessons every morning. Kev said he could hear CJ’s screams from the parking lot (CJ wasn’t too pleased about being dragged away from a small tree by the bike lock-up which he fancied attempting to climb), and he sprinted to intercept us before I began the rather complicated changeroom dance. He handed me this book (Olive Kitteridge, by Elizabeth Strout), which he’d bought on the way, picked up CJ, and honestly, I just couldn’t stop smiling. He stayed for the whole set of lessons, and it was all a hundred times easier. I even sat and read part of a story. The book was one I should have read at the cottage, because when I finally started it this week, I realized how fabulous it was (will blog about it later, I hope), and then realized it was due (yesterday), and someone else had a hold on it, meaning it had to be returned (I have a thing about avoiding library fines). Isn’t that just the greatest gift?
Oh, and I’m still smiling!
Hillside Festival, aka Soak-a-palooza 2009
July 30, 1999