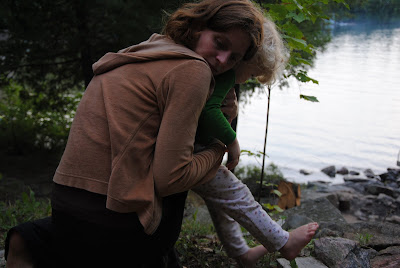 Wow. Some really interesting changes are taking place in my life right now. Changes are causing some conflict, and also opening up opportunities for discussion and potentially radical shifts (though I suspect these will be slow and steady rather than sudden and shocking).

This year, I’ve focused on my spirit, and that’s taken me to places of quiet reflection and also drawn out of me greater confidence and courage. My family has been noticing this is round-about ways, as I head out early in the morning to go for a run, learn how to swim, take time to bury myself in writing, head out as soon as supper’s on the table in order to take a yoga class, or set up the tripod and camera; all things that I am doing on my own, that don’t necessarily connect to their lives, and that might actually exclude them in one way or another.

Kevin and I have been struggling to find, in the midst of this extra-curricular activity, time to spend together. This morning it occurred to us that this is a problem of home economics. Kevin was the one who made this observation, not me. He observed that I am responsible for the bulk of the domestic work, and if I add in other work, whether or not it is of the paying variety, it means that my time becomes more and more squeezed. So I am writing down a list of all the domestic/household labour that I do (and that he does, too), with the idea that we work to split it more evenly, and also among the children, to some degree.

Thinking about sharing this work, and therefore having time to focus more freely on the triathlon project and writing generally, brought me to a new revelation: I think part of me wanted to go back to school and become a midwife because then my time would be accounted for, my work outside the home acknowledged as important, and the family obligated to pick up (some) slack–because I wouldn’t always be there to do it for them, and with good reason. It is a little fantasy of mine to imagine children packing lunches for school and getting their own snacks after school, and then tidying up. (I did say it was a fantasy).

Kevin admitted that he has fallen into gender stereotyping–well, we both have. He works and earns the money, and I keep the home fires a’burning. Except I also try to squeeze in a side career, and it is indeed very squeezed. Partly this is practical: because he earns the money that keeps us afloat, his work-time isn’t optional, and mine, with its occasional grant/prize windfalls and trickle of odd-job cheques is nowhere near enough to feed and house a family of six. So, the divide has made sense. But we’ve also become trapped by it, and blind to it. Because of course my work will never add up to much if I can’t commit to or pursue freelance jobs that would require even moderate time commitment over and above what I’ve already carved out. And fiction writing is the kind of business that demands long-term investment, a risky investment at best. But without investment, it will add up to precisely nothing.

So, our question now is: how to go forward, treating what I do, outside of domestic duties, as work worthy of more time, and energy? 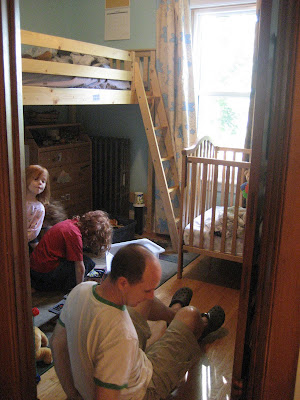 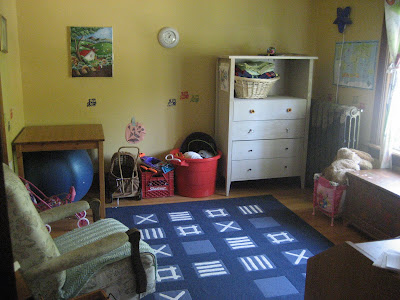 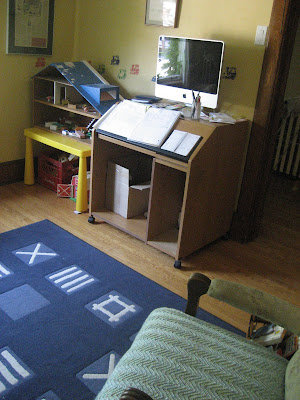 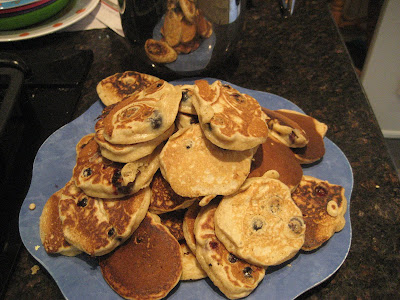 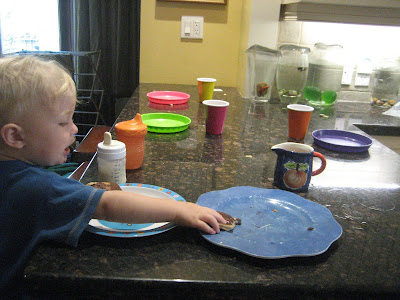 As a friend recently commented, the start-up of the school year always feels like the real New Year. Here at our house, we’re going out of our way to prove this to be true. We’ve got a tentative weekly schedule mapped out on pink construction paper and filled almost to bursting (with room made, it must be said, for each of the parents to pursue extracurricular interests, aka sanity; Kev’s got hockey and soccer; I’ve got sibs night, girls’ night, and an evening class). We’ve also spent several of Kevin’s holiday days rearranging the house. Top photo: the boys’ room. Note crib nuzzling bunk bed. The next two photos depict CJ’s former bedroom / my office / playroom. It is now excessively, almost disturbingly, clean and empty-feeling. The plan is to expand the purposes of said room over time: it will remain a playroom, and my office (yay! I can now work after the kids go to bed!), and we’re also calling it the study, where children seeking quiet can sit and read or work at the disturbingly empty table that currently has no chairs. It’s a start. Eventually, I’m envisioning several tall bookshelves and another communal computer. I love imagining our house evolving as our children grow and change. Which child will mine out a room in the basement? Or perhaps the attic?
While I reorganized the office, Kevin flipped piles of blueberry pancakes. By the time I’d ventured downstairs, none remained. See that last one? CJ did. He wanted it. He is now sleeping the sleep of the contented blueberry belly.
Page 10 of 10« First«...678910