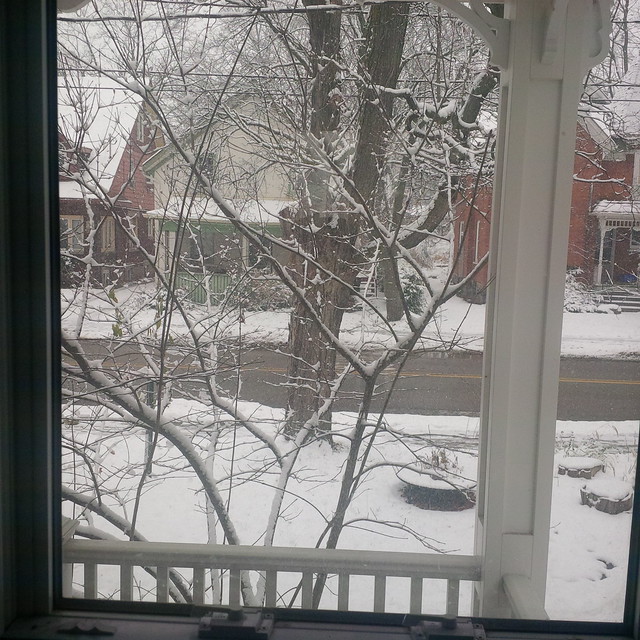 With apologies for the lacklustre photography; I just don’t have time to use my Nikon on this busy morning. #therefore #cameraphone

It’s Monday in Canada. I’m looking out at a postcard snowscape that makes me want to  hibernate in front of the fire for the next six months. (Let honesty reign.) The snow and its seasonal existence should not surprise me. Yet every year it does. The car needs to be scraped, the children require mittens, snow pants, boots, hats (why are at least one or two of these items per child always missing / suddenly too small / wet or dirty / lost / apparently too geeky and uncool to be suffered, and why is this discovery always made mere moments before said children need to leave for school?), and also, to continue this long run-on sentence, the dogs hate going outside and must be sternly encouraged and dressed in little sweaters, which we find adorable but I’m pretty sure they find humiliating. In short, everything takes longer. Even that sentence. I’ve yet to adjust, having yet to admit that this is actually happening, that this white stuff actually might just stick around for awhile. Deny. This is just the first stage. Don’t worry. I’ll get to Accept, even Embrace, if I can just stick it out through Wallow, Growl, Deep Abiding Desire to Stay Indoors, and Christmas.

A few things to tell you about on this Monday in Canada.

1. For local friends, two events to highlight if you’re up for getting out:

〉 A feminist film festival is coming to the Princess this week, Nov. 18-20, featuring films on a variety of important and of-the-moment subjects, including murdered and missing aboriginal women in Canada. Website and ticket info here. Spread the word.

〉 After Hours at the Waterloo Public Library, this Friday, Nov. 21, 7PM, a fundraising event for the library with food & drink, and featuring inspirational speakers, including me. Come and watch me  be inspirational. Event and ticket info. More word-spreading, please.

2. Some nice news this morning from my Canadian publisher, House of Anansi. Girl Runner has been selected as a Best Book of the Year (#8) and a Best Canadian Book of the Year (#3) by Amazon.ca. (But if you can slog your way through the snow to your local indie bookstore, shop there instead.)

3. Question for you, people out there reading this blog: would you be interested in buying signed and personalized copies of Girl Runner for Christmas gifts? If there seems to be interest, I’m going to figure out a way to arrange for this to happen.

Mondays. They’re all about the paperwork and administration. This is today in a nutshell: make to-do lists, clear the desk, return the library books, go to the bank, renew both drivers’ licence and health card, soak the beans, and on and on. You know? So this post, I apologize, suffers from a similar tone.

Enjoy the white stuff, of the cold deceptively fluffy variety. 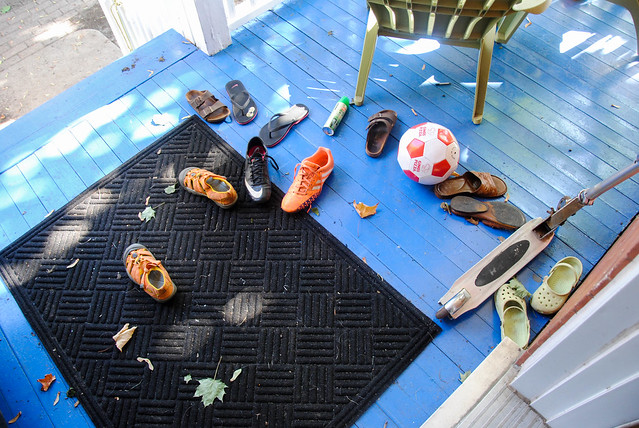 Today is Thanksgiving in Canada. We ate our Thanksgiving dinner yesterday, a feast that always gives me enormous pleasure to prepare. A day of cooking is a really good day, especially when it ends with pie. But with all the cooking and eating and pie, I never got out my camera. Family visiting, cousins playing, dogs underfoot and whining at the door, a table loaded with bounty, an impromptu evening concert, babies and grandmas and wine and dishes being washed up in the kitchen by hand.

It’s a bit ironic that I’ve gotten this fancy new blog location, on which to display my photographs, just when I find myself taking fewer and fewer. Less time to process them. More in the moment moments, forgetting to pull myself out and act as official recorder. This fall is passing in a blur. I may keep little of it, only fragments, perhaps jotted down here.

Today, our chalkboard became a mess of scheduling, as Kevin and I planned for the coming weeks month. I’m leaving on Thursday for Calgary, Banff, and Vancouver. When I get home, I’ll be off to Burlington, Toronto (several times), Hamilton, Uxbridge, zooming and darting like a bird searching for a landing spot, an anxious flitting creature unable to settle, quite.

When I’m out west, and missing my family like crazy, I’m going to think of last night, after the dishes were done and the pie eaten, and some of us were singing old songs while strumming on ukuleles, sunk into soft cushions, reclining, unwilling to say goodnight, not quite, not yet, as our eyes grew heavy. We were sleepy, tired out from a day lived fully, but we didn’t want to stop playing and singing. Not yet. Not yet. Not quite yet. 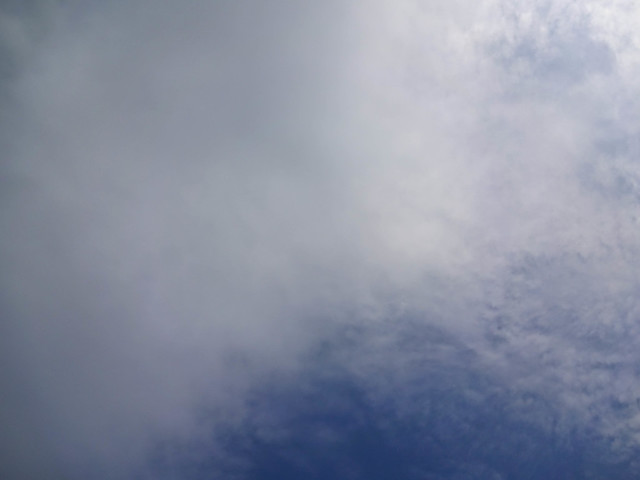 Insects buzz. Insects with a vibrating hum and insects chirping at regular quick intervals, like a racing pulse. Cars pass. Engines roar, mildly, louder when accelerating, heavily whirring before changing gears, puttering, brakes squeaking, a rushing sound like wind that is not wind, that is mechanical, a hush of white noise.

Shadows on yellow brick, moving as the wind moves the trees, patterned, like lace.

The dogs begin to bark. What have they seen or heard? The first to begin is DJ, loudest, the leader of this pack of two. Suzi joins, confused, eager, uncertain. DJ stops, stiffens behind the raspberry patch, behind the cluster of dead flowers, and sniffs the air. Whatever she has seen is gone. The yard is safe, again.

On the clothesline a few items hang, shirts upside-down, athletic gear airing in the breeze and sunshine. The leaves are turning colour. The sky is steady opaque blue, not quite dark, not quite light, clear behind the flame orange leaves, like an artificial backdrop for a photograph I took last year, and the year before, but not yet this year. 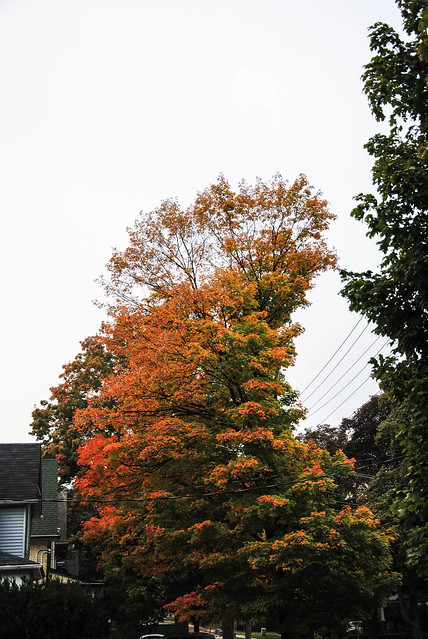 I have not taken any photos of changing leaves this year. This is not because the leaves have not changed. I don’t know why I haven’t brought my camera outside to catch the season on its cusp of coming.

I turn to examine the pile of sandals by the open back door, and see instead a large spider, suspended in its web, very near me. It hangs upside down. It is alive, its legs twitch, each leg thin and ringed with a pattern of pale tan, dark brown, and a shade in between the two colours that looks mottled. Its body is fat, and also patterned in shades of brown. I would fear it, but it has lived on our porch for much of the summer, moving its web higher or lower when disturbed by one of us. I have watched it through the kitchen window suck clean the body of a large fly, a bee, draining each to a dried husk of its former self.

I am writing this because I’ve given the students in my creative writing class the same exercise. I want to feel what they feel while forced to sit and focus for 15 consecutive minutes, uninterrupted except by what they observe, their objective to seek out the details, no matter how small, and place them on the page, without judgement, without critique, simply observing and noting and describing.

It is an exercise I’ve given myself at times throughout this past year. It asks not: is this interesting; but rather: what is here to be found?

The timer rings. I don’t want to finish yet. The dogs have gone inside, and are working themselves into a sudden frenzy of emotion, howling and yipping at something they’ve seen through a window. Gradually, the noise diminishes, then stops abruptly. Here is Suzi, come to find me, her little body quivering.

Here am I, glad for the excuse to sit still and think of nothing but what is, right now. 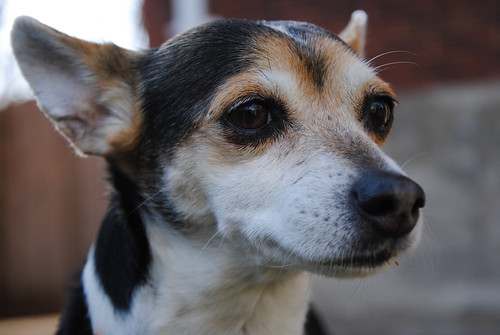 The dogs keep staring at me. Why? What is the matter with you, dogs?

They are pacing my office, stopping to watch me with hopeful, expectant, crazed eyes, and I have no idea what they want from me. Is it a tornado? Impending inland tsunami? Are they hungry, bored, thirsty, in need of a pet?

In tandem they place their little paws on my leg and raise themselves up and grin, staring manically.

I pet them, briefly, while they grin and stare, but it only makes them jealous of each other. “Go on, get down.”

They retreat, but only to my feet.

It’s unnerving. It’s like trying to read the newspaper while someone reads over your shoulder. You know they’re there, reading over your shoulder, even if they’re doing it quietly. I can see you, dogs! Good grief. What the hell?

Twice, recently, Suzi has had brief episodes of behaving like a regular dog: she’s played fetch with a ball. She performs this dog-like trick just long enough to make us think it’s repeatable, and then, less than a minute into the game, she stops cold and ignores the ball, which thunks sadly to the floor, instantly forgotten.

“But Suzi,” we say hopefully, momentarily believing in her dog-like potential, “look, it’s the ball, don’t you want to chase it?”

Suzi gazes off into the distance, pretending never to have been involved in such indignities. Was it an hallucinatory episode? “No, but really, she was chasing the ball and bringing it back to me! You saw her, didn’t you? Didn’t you?” 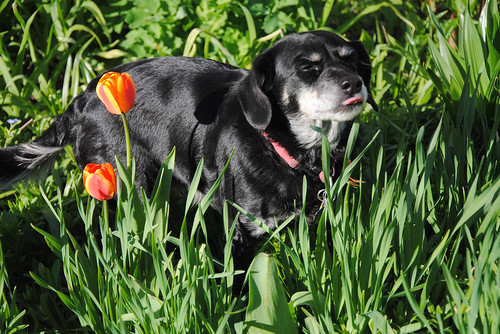 Suzi is the smaller one, a neurotic ball of nerves and need, and DJ is slightly larger, and essentially untrainable, although she can perform spontaneous backflips when her dinner is being served; and the dogs seem to be getting old, suddenly, and that worries me. We don’t know how old they are, as they came to us having been rescued from an over-crowded pound in Ohio. I have pangs, thinking about them being old, perhaps older than we’ve guessed. I look for new grey hairs around their muzzles.

I check the Weather Network. No signs of tornado or tsumani. I open the back door. They show no interest in going out. Apparently they just want watch me, anxiously. 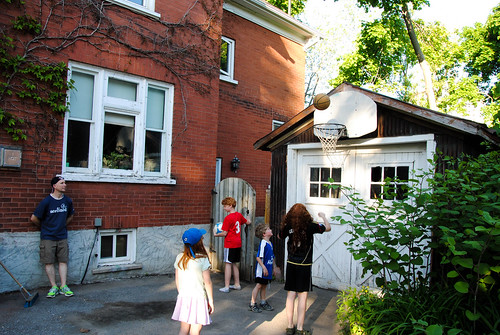 Enjoying the peace of this photo. Or maybe it’s the pause. The moment suspended.

In a rush. Monday morning. Dog can’t decide whether she wants in or out. Need to get on bike and get to a school meeting. Still not getting enough sleep.

I’m tempted to put all of the above into hashtag form, but I don’t know why. Maybe hashtags are kind of like miniature poems? Or maybe I should just sign up on Instagram? Here’s how it would look …

Just have to add a postscript. Goes like this. 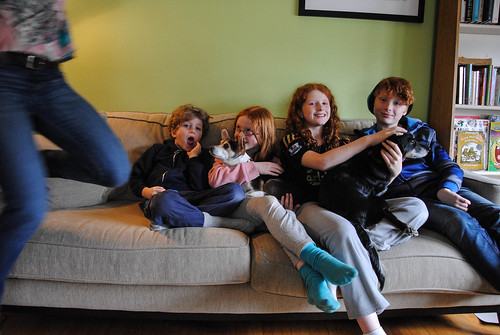 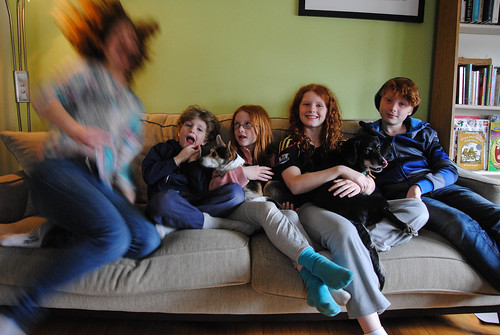 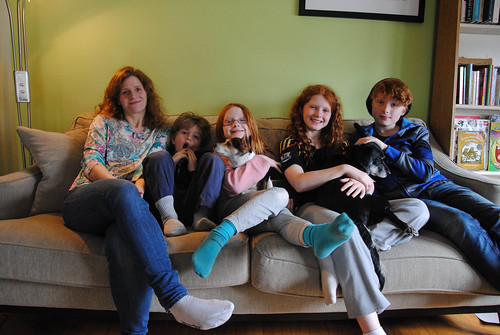 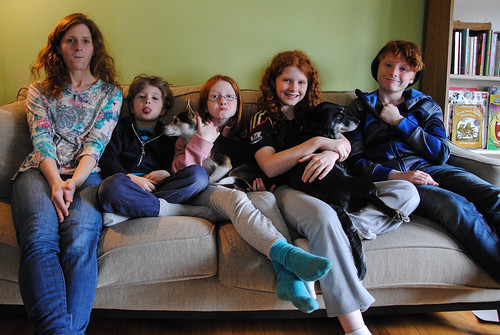 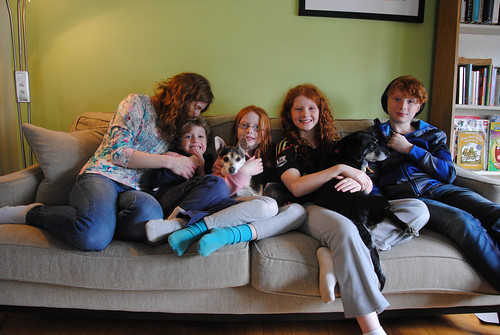 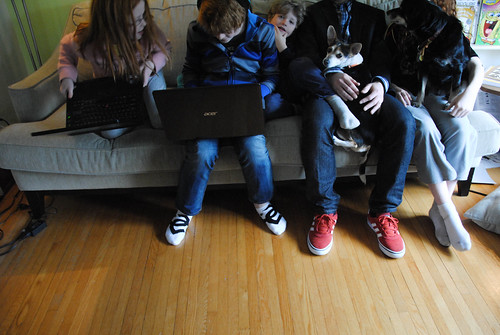 (photos look best if clicked on and viewed in full)

Happy Easter, from all of us to all of you.