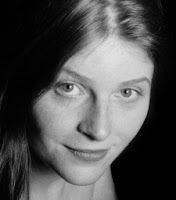 Pickle Me This, a wonderful CanLit blog by writer and mother Kerry Clare, is putting a spotlight on Family Literacy Week. (Did you know it was Family Literacy Week? Quick! Grab a kid! Preferably your own! Read a book!). I was asked to write a “Literary Mom” entry on favourite books to read to my kids. Talk about the perfect assignment.
The photo Kerry’s using is, gah!, seven years old! I was still in my twenties. Damn, I was hot. I sent her a new and updated photo that depicts me as I am now. Sigh. What do you know. I’ve gotten older.
(Betcha in seven years I’ll be saying: That was when I was still in my thirties! Damn. I was hot.)
Uh. Morning o’ vanity, apparently. Click here for the Literary Mom link. 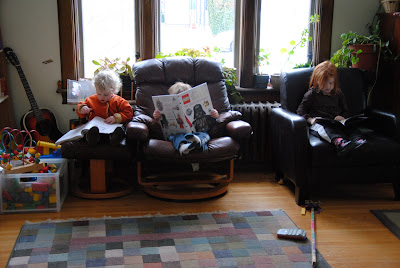 Spontaneous quiet time. (Except for the one who’s “reading” out loud.) Love it. Okay, it’s dissolving as I type. But was quite amazing while it lasted.

Hair Hat has been chosen as one of five books for Canada Reads 2010: Independently!!!! (If you want a copy to read along, contact me.)

I’ll Write It Up

Today’s “Cabin Fever” column is on best picture books for the holidays. This was a fun one to research and write. Like giving me candy. Hand this mama a book, and she’s practically drooling.

ParentDish will be running approximately two “Cabin Fever” columns each week, plus an additional Q&A every other week with someone who is in some way creatively involved with children. My first three interviews have been with: Nicole Dueck, songwriter and musician and teacher, whose kids’ CD is titled Lucky Dog; Elisabeth de Mariaffi, children’s cookbook author, who writes recipes for Owl and Chickadee, and whose brightly-illustrated and easy-to-use book is called Eat It Up!; and Jirina Marton, who just won the Governor General’s Award for illustration for the truly beautiful holiday book called Bella’s Tree.
I am loving my conversations with these creative and thoughtful people.
Anyone know of someone who should be sought out and questioned (in the most polite way possible) for their expertise? I’m thinking an interview with a children’s yoga or dance teacher would be great. Who would you want to talk to? Whose brain would you want to pick?
I plan to use my column to celebrate, explore, and suggest creative, more-with-less family activities that don’t involve screen time.
(Which is ironic, because Albus is beyond desperate to play on the computer, and in fact told me last night that it had been a “bad” day because I hadn’t let him do so. This, after we’d rushed to eat supper by 5, so we could go to the school concert to watch him perform as an elf–AppleApple sang, too–after which we came home famished, ate a second meal, and discovered it was already quarter to bedtime. “Albus sad,” he kept muttering, reverting to baby talk, as he crouched on his floor surrounded by his oceans of Lego. Though, come to think of it, as soon as I found a spare moment to give him a snuggle, and then we all read together on the couch before bed: “Albus happy.” So there you go. I’ll write it up as a column.) 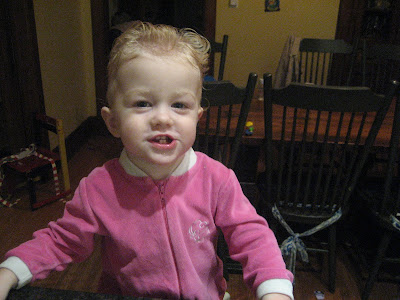 Someone likes getting his hair brushed. But is he going to declare us the meanest parents ever, somewhere down the road, for dressing his gorgeous toddler self in a pink sleeper? And photographing him wearing it? And posting said photograph online? After this photo was taken, he asked to “see! see!” and when shown, he stabbed with his finger at the little person on the tiny screen and yelled out his own name, for the first time ever, to the insane delight of his entire family, who happened to be gathered ’round for bedtime snack (Kevin’s least favourite “meal” of the day).
:::
My friend Tricia has joined a challenge to read 100 books this month–children’s books. That got me thinking that it might be interesting to keep track of what I’ve read on a given day … say, yesterday. I know that I read a lot every day, but it’s not the reading I used to do when I would sit down and devour a book for hours at a time. It’s endless little bits that add up to … not sure, really. Broader knowledge? Or shallower knowledge? Less about more?
:::
So, here’s what I read on Wednesday, though not in any particular order …
Front section (news) of the Globe and Mail newspaper (on actual newsprint–we get it delivered). Online first-person piece by Diana Athill, from the National Post’s website. A blog about the Bookstravaganza reading I attended on Monday. Caught up on the Globe and Mail’s online book blog. An interview with Annabel Lyon on the Toronto Star’s website. A bunch of emails. Facebook content provided by Facebook friends (thanks, friends!). Dooce. Several assigned articles in a textbook called Open Boundaries, which, truth be told, glazed my eyeballs. The obituary of a famous anthropologist in the Globe and Mail. Something from Nothing (a children’s book), and Pancakes! Pancakes! (another children’s book). Part of Attack of the Giant Mutant Snow Goons, or somesuch, a Calvin & Hobbes comic book. Several recipes. A couple of my own stories, for editing purposes. My women’s studies essay, for proofing purposes. Various sheets of paper carried home in the bags of my school-going children.
There may be more that I’m forgetting now.

Read this first-person account by Diana Athill, as published in the National Post. It’s got flavour. (She and Alice Munro were the writers Kevin and I went to Toronto to see a couple of weeks ago).