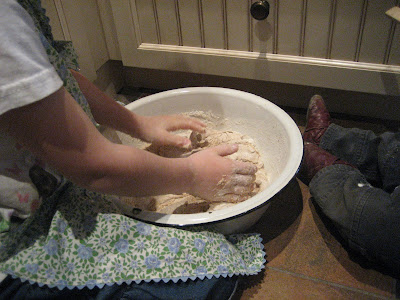 I always double this recipe and make four loaves, but you need a big basin to make that amount all at once. So, below is the two-loaf version.

In a large bowl, dissolve 2 and 1/4 teaspoons active dry yeast in 1/4 cup warm water (slightly warmer than body temperature; to test, you should be able to stick your finger into the water comfortably). Use 2 and 1/2 teaspoons if you’re making whole wheat bread. Let sit for about five minutes.

Stir, and add: 2 tablespoons sweetener (honey or sugar or even maple syrup); 1 tablespoon salt; 2 tablespoons oil or melted butter or shortening; 2 cups warm water; 3 cups hard bread flour, whole wheat or white. I definitely recommend using hard flour, which is meant specifically for bread-making. At this point, you can also substitute 1-2 cups of the bread flour with dry, grainy additions, such as flax seed or flax meal, oats, millet, wheat germ or bran, sunflower seeds, ground seeds, or really anything your tastebuds desire. Raisins or other sticky dried fruits should be lightly dusted with flour before adding. Start by experimenting with a smaller amount. Joy of Cooking recommends using these in quantities no larger than 25 percent of the weight of the flour (which, to me, sounds like huh? So I just play around with the amounts).

Stir, stir, stir, then begin adding the last 3 plus cups of bread flour. I recommend using some hard white flour even if you’re making whole wheat bread; the loaves will be lighter and will rise more. Add this portion of flour by half cups, kneading to mix. I knead in the bowl, on the floor (as Apple-Apple is demonstrating in the photo). You want your dough not to be sticky, but also to remain moist. This can take some trial and error. Don’t keep stuffing more flour in just because you can or because the recipe suggests you should (as I’ve made the mistake in the past). A moist dough will rise better (not damp or wet). When you’ve kneaded to satisfaction and your dough feels silky and encorporated (ten minutes, more or less), lightly oil the surface of the dough, turn it in the bowl (I use the same bowl; saves on dishwashing), cover with a damp towel, and set somewhere warmish, not drafty, to rise.

Let rise one or two hours. Grease two loaf pans. Punch down dough, cut into two equal pieces, roll each with your hands into a loaf shape and place, seam down, into the pans. Cover and let rise another one to two hours.

Preheat oven to 450 degrees. You can add a pan of hot water to your oven to add moisture while baking (sometimes I do; sometimes I don’t). You can also brush the loaves with butter or egg-wash or milk (again, I don’t bother). Pop loaves in at this crazy high temp for ten minutes, (don’t wander off!), then turn down to 350 and continue baking for approximately 30 minutes (slightly less in my oven, but you’ll have to play around with yours). To check that your bread is done, slip the loaf out of the pan and look at the bottom–you can rap it with your knuckles, too: bread is sturdy; it doesn’t mind. If the bottom is a bit pale, pop it back in the pan, and into the oven for a few more minutes.

When done, remove from pans and cool on racks. Or eat immediately with butter melting into soft warm squishy slices (be warned: bread is hard to slice when it’s hot). If you make more than you’ll eat in a day or two, freeze the extra. Fresh-made bread stales quickly.

Enjoy! And let me know your results … 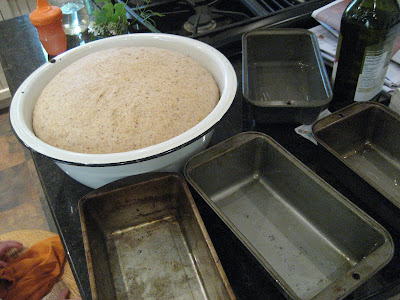 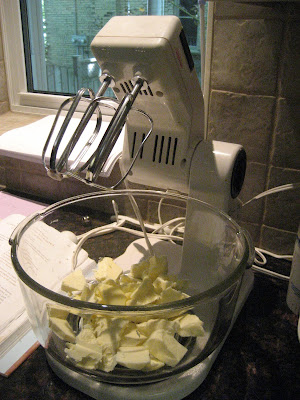 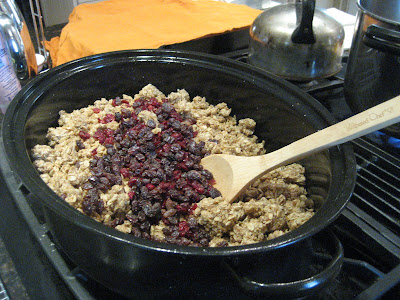 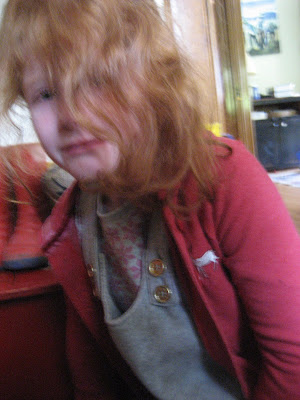 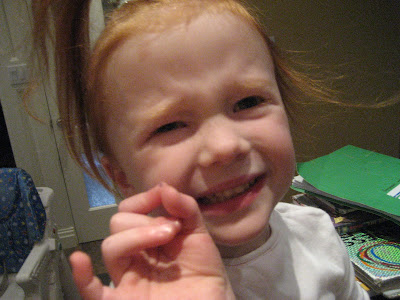 Obama. At around 10pm last night, briefly considered doing the responsible thing and going to bed, but tossed that notion right out the window because there aren’t many moments in a life when you get to sit on the couch and experience history as it is being made. That sounds grandiose, and I generally shrink from anything resembling idolatry, but there it is. When Barack Obama came onstage, I felt myself gasp. All evening long, it seemed too much to hope for, that at any moment something could wrong. There was Henry Champ (CBC) at the White House reporting about a sudden and unexpected mob of young people running down Pennsylvania Avenue, chanting for Obama and against Bush, and it felt, briefly, like something terrible was about to happen–a riot, a display unsuitable for the moment that could potentially ruin it. But, no. It was only students coming out of their dorms from nearby universities, using their (as Mr. Champ put it) “text message machines,” to call each other to a spontaneous and, thankfully, peaceful celebration. John McCain’s speech was gracious, better than his entire campaign, and perhaps redemptive. And, then, finally, there was Obama walking onstage with his beautiful family in a park in Chicago, and the impossible was suddenly real.

I fear for this man. I fear for his safety. I fear for him because he is symbolic, because he embodies the hopes and aspirations of a country, and of a world. I don’t know whether Americans can fully appreciate how stunning his victory is for the world. I don’t know whether Americans know how far their nation has fallen in the eyes of the world under the governance of George W., but the overwhelming popular turn-out, the line-ups hours long endured by voters, the grassroots support of Obama’s campaign, culminating in his victory, changes the way the world sees America. It renews faith in democracy. It legitimizes the American dream. A bi-racial man who never knew his dad, who has a foreign-sounding name, whose background is unusual, exotic, not privileged, who has not spent decades building backroom political allies, rises in his 47 years to the most powerful position in the country. I am genuinely proud to be American, in a way I never imagined feeling. There: I know it sounds grandiose. I can’t help myself.

Okay, I know he faces a crazy, impossible task, trying to set the broken economy straight, working within straitened budgets, two dismal wars underway, and all the rest of it. But he has a quality that’s rare: the ability to involve ordinary people in the processes of power. When people feel their voices aren’t heard, or that they, as individuals, don’t matter, they check out of the system. It seems like Barack Obama has the ability to bring people in, to inspire them to work together, to think of something other than themselves, other than immediate gain. Does that make him sound like a socialist? Well, where’s the balance? Individual responsibility, and collective gain. Does that fit with life, liberty and the pursuit of happiness? Patriotism is a sense of belonging, isn’t it?

Clearly, speechifying is not for me.

Another freakishly hot day, so I hung two loads of laundry. Seems wrong for November. I’m baking a batch of Amish Friendship Sweet Bread, with my own improvised alterations to the original recipe. Yogurt, chocolate chips, less oil. It rose up beautifully. Tonight our family is heading to Toronto for my brother Christian’s art opening at the Steam Whistle gallery. We’re very excited and proud. This morning, AB said, “He’s a real artist! And you know him even better than we do!” Oh dear, baby CJ is muttering to himself in the baby monitor, suggesting he’s ready to get up and get busy.