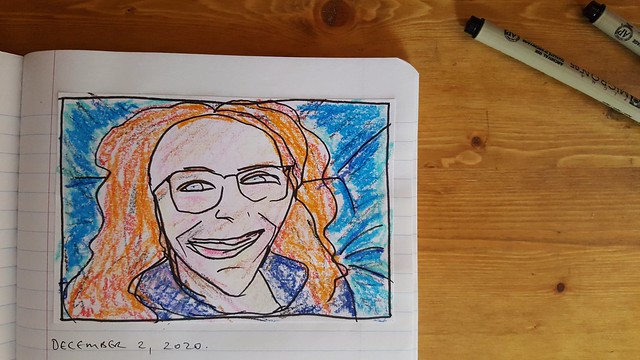 I listen to this song even when it’s not the Christmas season. They’re cutting down trees, they’re putting up reindeer, and singing songs of joy and peace. Oh I wish I had a river I could skate away on.

Oh, Joni. I recently read a profile about her early songwriting in the New York Times and then drifted over to read another piece in The New Yorker from 2012 by Zadie Smith about becoming a Joni convert. I’d already read the Zadie Smith essay, maybe when it was originally published, but I read it again. The internet will give you so many windows and doors to open, chasing ideas that you might tell yourself are inspirational or aspirational, when really, you just want to be as original and seemingly free as Joni Mitchell. But it’s okay just being you. Isn’t it?

I’ve started a new project that I’m planning to do every day in December, and possibly beyond. It’s a way of crossing the threshold from the every day into the imagination, a daily portrait and caption, created in about 20 minutes or so, while listening to music. I draw a portrait on an index card in pen, then colour it with crayons (an important part of the playful process!), then write a few lines about whatever’s on my mind, giving myself no more than 3 minutes for the text so I don’t start sweating over it. Like this: 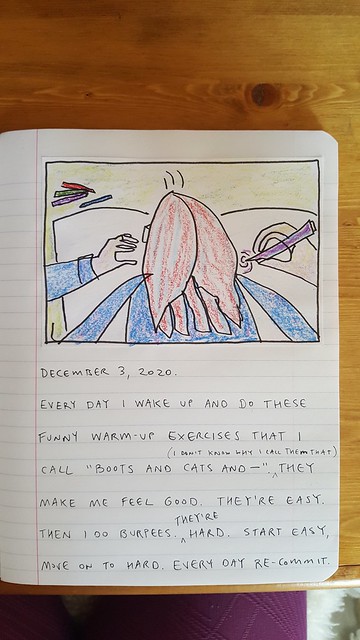 Here are a few other good things and random thoughts, on this Friday afternoon when I’ve run out of steam and am about to turn to fun videos on youtube while doing my stretching routine on the office floor, which isn’t a half-bad way to spend half an hour, truth be told — maybe I’ll count that as one of the random good things going on right now. I’m also attempting to do sets of 10 burpees whenever I think of it throughout the day. While waiting for lunch to heat in the microwave, for example. Before bed. The goal is to raise my heart rate in spurts throughout the day, maybe to compensate for not running right now (though I do ride the spin bike pretty frequently). Whatever. It lifts my spirits every time. I finish my burpee set and throw my hands in the air in victory! Yes! (I should draw that.)

Other daily goals: Go outside! Every day. 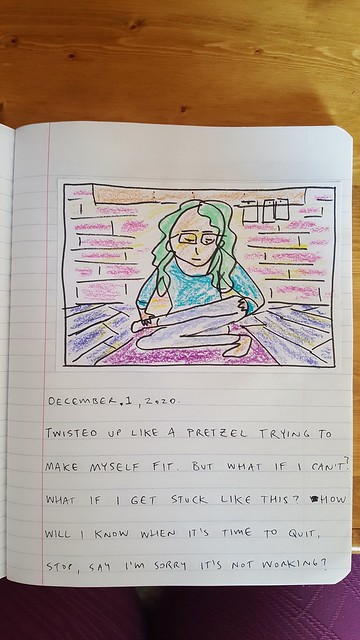 And: Flip my current pattern of writing in a frantic panic late in the afternoon, and write in the mornings instead (answer email only after I’m all written-out). The daily portrait and caption kickstarts this goal, and so far it’s worked wonders. Start with something fun and easy, something I look forward to doing, and suddenly I’m pitched into writing new material without even thinking twice.

Also: Work harder. (Weird, I originally wrote “Word harder.” That works too.) Work/word harder is my main life goal. But I mean that only insofar as I mean work harder to dig in, commit, finish projects, even if I don’t know what will happen to them. Hard things are hard. Curiosity is my fuel. Patience is a gift but also can be a weakness if it turns into numb acceptance. Grit is necessary. Add it to your breakfast. Relish and savour what you’re doing because you never know what you’re making. Or what will stick, what will matter, what others will appreciate.

For example: A student sent me a message this week, writing: “I also wanted to tell you that as a graduate, I still appreciate your class. I’ve read books a little differently since, with more compassion, and more interest in the beauty of the work.” How could I guess that a student would come away from a writing class with a new lens on reading? What a gift. I love thinking about the accident of connections, about the things we keep that perhaps someone else has given us, but they don’t know.

Okay, one more goal: Reach out with appreciation for the gifts received from others. I might also add, if there’s a teacher who’s helped you in some way, let her know. Especially now. Any teacher who can engage her students through the screen or the mask is working at a level of commitment and energy and preparation that is almost impossible to understate. 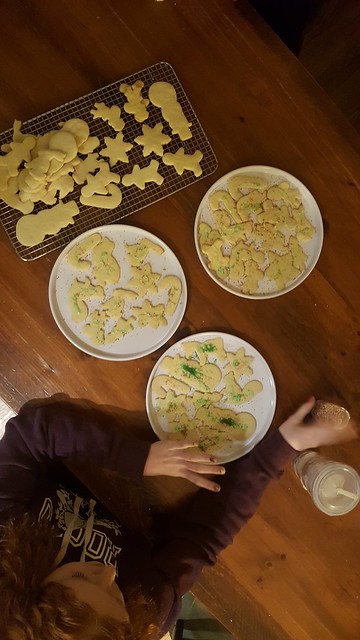 In conclusion, as this seems to be a post that has brought up boundless wells of inner gratitude, I’m grateful for a friend’s idea to create our own collectively brainstormed advent calendar of family activities. As a family of six, each of us contributed four ideas which were randomly sprinkled into the calendar’s pockets. Day 1: decorate Christmas cookies (made by F); Day 2: breakfast for dinner (waffles, made by me); Day 3: ice cream delivery to grandparents; Day 4: games night. (Days 1 and 2 shifted the responsibility to the baker and the cook, and both of us were slightly crusty about this; as a result, we’ve also created a bunch of back-up activities to be accessed should one idea not work out on a particular day). 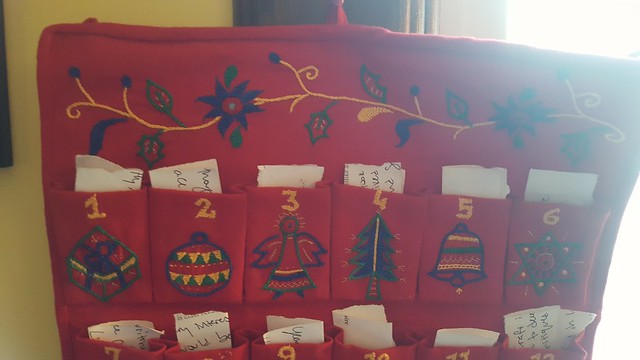 I’m grateful for a little surprise to look forward to every day of advent.

And I’m grateful to you, my friends who read this blog. It gives me a little boost knowing you’re out there. Connections. They’re harder to come by right now, and I cherish them all the more for that.