No matter how small 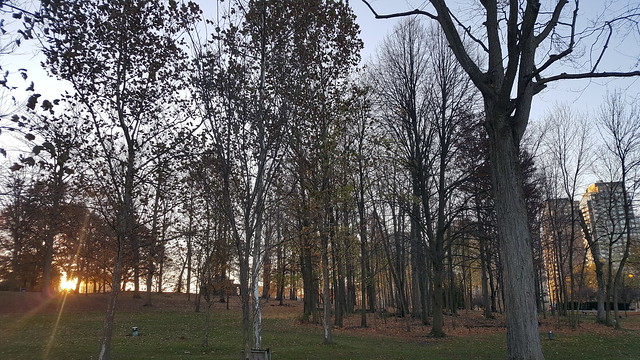 Ever get the feeling that too much is on your mind, so instead of trying to say it all, you say nothing instead? Yeah. That’s where I’m at. That’s where I’ve been at for a few weeks now. I’ve also been reasonably busy, trying to seize all the moments in all the days that have come calling. It was sunny and warm for a full five days, so I was outside as much as possible with friends and family. Then one of my kids had a migraine for three days last week. I haven’t been able to run, as the nagging pain has returned, so I’ve been experimenting with other forms of self-soothing. Early morning dog walk: unsuccessful, did not provide enough endorphins, although the dog was thrilled with all the new scents to sniff. Riding the spin bike: much more successful, with the added bonus of delightfully cheesy Canadian entertainment. (While spinning, I watch Murdoch Mysteries, and I’ve been told that I talk out loud to the characters, muttering things like “Don’t go in there, George! You’re going to regret it!” or “It’s the brother. It has to be the brother!”)

Up till last Friday, I was working full-tilt on novel revisions, and now need to pause and consult with my editor to make sure we’re on the same page. It’s been fun, and a relief, and an escape, immersing myself in an imaginary world, where imaginary characters make imaginary choices and try to figure out how to mend themselves, or inflict mending on others. 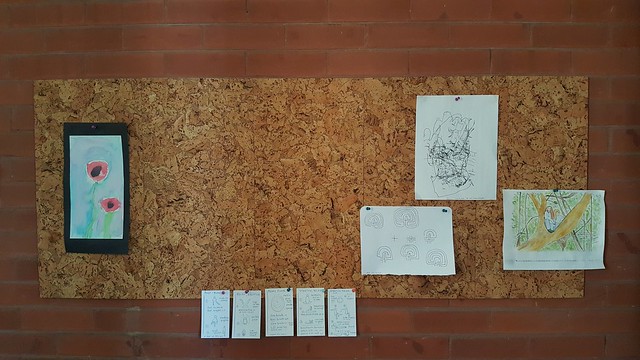 My corkboard is mostly empty, but for a number of physio exercises — I’ve drawn a series of reminders for myself on index cards, including instructions for stretching exercises that are meant to get a person up from her desk at least once an hour. (It has yet to happen, but a person can hope to change her ways!) The other items on the corkboard are a watercolour of two people in a tree, inspiration for my novel; a drawing of hands that look to be in prayer, to remind myself that my work requires patience and grace, and also as a reminder of the novel’s theme of spiritual searching; and some sketches that show the steps for making a labyrinth, though it looks more like I’ve drawn a strange, childlike version of the brain. Not on the corkboard, but critical to the revision process, is a sketched-out structure for the novel, done in a kind of personal visual code that I find very satisfying and comforting to look at. 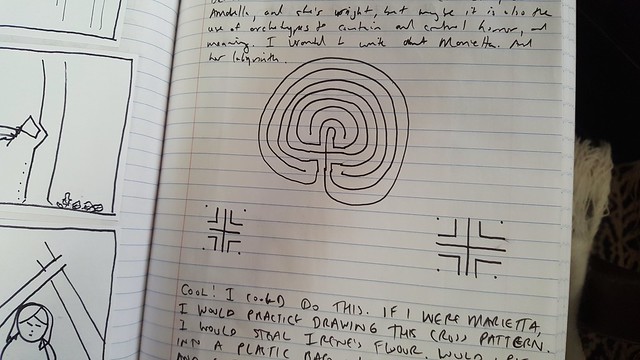 Tomorrow, my oldest daughter turns 18. I’ve ordered donuts for pick-up. I’m planning to bike to pick them up, no matter how cold. Also this week, I’m introducing a conversation at the Wild Writers Festival on Thursday, 7-9PM, between two wonderful writer, Lamees Al Ethari and Antonio Michael Downing: here’s the registration information. And on Friday morning, I’m going to read my picture book Jammie Day to a friend’s kindergarten classroom. These last two events, needless to say, are happening online. One of my goals for this pandemic time is to become more tech-savvy; or at least, less-tech-anxious.

I’m grateful for plans. No matter how small. Like those donuts.

Almost every day, I lie on my office floor. Sometimes I take a nap. It’s a glorious floor for napping. More often, I do those physio exercises 0n the corkboard. I meditate, or listen to a podcast. Almost every day, my eyes fill with tears. It seems like a way to live now, on the verge of tears, but also attempting to strengthen and bolster oneself, to practice breathing, to pay attention to the pain, not to ignore it. Not to be overwhelmed by it.

Where will my feet land?
What's making me laugh today