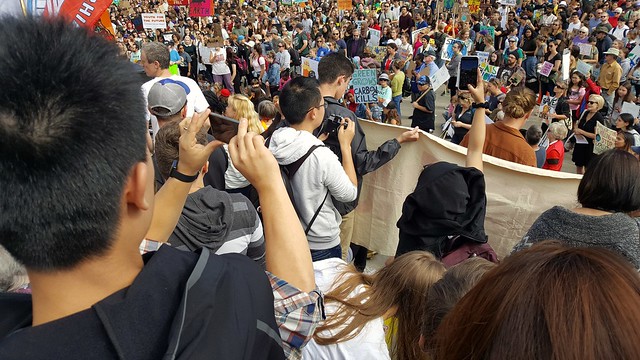 Today, I went to the climate protest in our town square. None of my kids went, and Kevin was working and couldn’t strike, so it was just me. We live nearby, and I walked, noticing people amassing, some with signs, many with children or pushing strollers. By sheer dumb luck, I ended up standing on a concrete riser closer to the front, where I could see some of the speakers. Drumming. Call and response. “What do we want?” “Climate action!” “When do we want it?” “Now!” And then a stripped-down orchestra appeared, led by a conductor, and they began playing Ode to Joy, quietly at first, a single cello, then more instruments joined, and at last, like magic, the choir burst out singing. I was right in the middle of it; I’d seen them filing in with their sheet music.

Goosebumps. I wished my kids had skipped school to experience this, too. 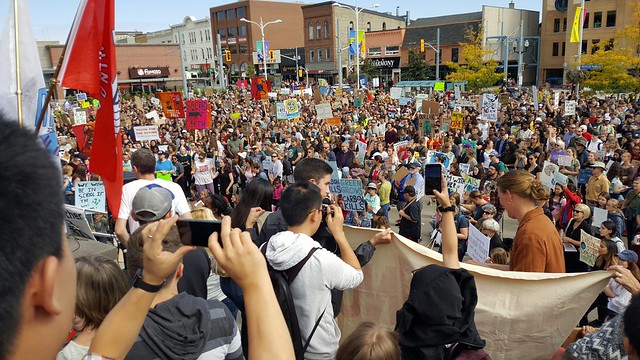 One speaker asked us to turn to someone else and say why we’d come. I turned to the woman behind me and introduced myself, and she introduced her son. I admired his handmade sign, covered in scribbles (he was 2 years old, at most). But I didn’t say why I’d come, nor did I ask her why she’d come.

At one point, the crowd start chanting something that I interpreted as HOPE. After calling this out for awhile, I realized everyone else was saying VOTE.

Well, it was hope that got me out the door and into the crowd. At least, I think that’s what it was. I wonder whether recognizing and responding to the climate crisis is a matter of viewing everything through a different lens. There are so many things we’re blind to, until we learn to see differently (racism, misogyny, poverty, and the list goes on and on). We don’t know what we don’t know, in so many ways, and so often we don’t understand until we’ve experienced something up close, either personally, or in some other immersive way (side note: stories are powerful like this). My kids, yes the same ones who didn’t go to the protest, are seeing the world differently: my son, who can vote this fall, says he’s most interested in climate policies because the other stuff seems insignificant by comparison (jobs, the economy, taxes). 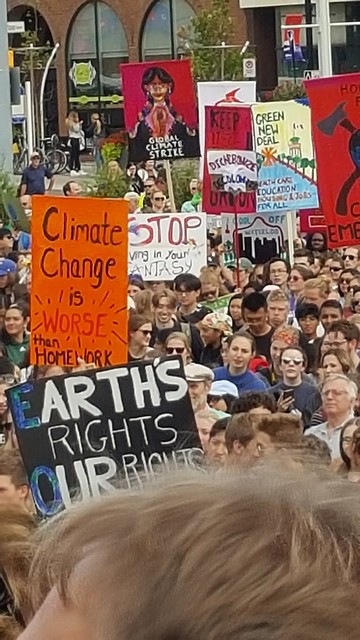 This one sign said: STOP LIVING IN YOUR FANTASY.

That got me. It is a form of fantasy to imagine we can keep living the way we’re living, especially here in Canada, where we consume far more than our fair share of pretty much everything. I didn’t make a sign, but I was thinking: WAKE UP!

I was also thinking: WHAT ARE YOU WILLING TO SACRIFICE?

But that’s more of a question for myself, a personal question. What happens after a protest? I feel overwhelmed and swamped with partial and seemingly insignificant choices — cooking vegetarian/vegan (which we often do), refilling plastic containers at the bulk store (ditto), walking more, driving less (but soccer fields are so far away!). Maybe I want to know that whatever I’m sacrificing will actually be consequential, rather than merely delusional. Rather than another form of fantasy. I want a road map. I want direction.

Also, I want leaders who do something. But what? What would I be willing to sacrifice?

Attempts to capture the ineffable
Box out the pressure