I want to scream, not write 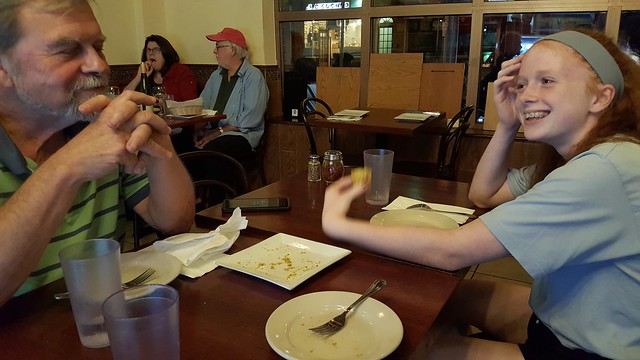 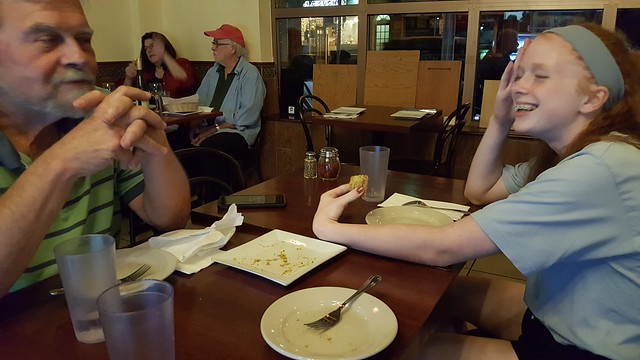 On Friday, my dad and daughter and I drove to Princeton, New Jersey for the funeral of my dad’s uncle, my grandma’s younger brother, who passed away in June at the age of 93. He and his wife had been married for 68 years (makes our 20 sound like a drop in the bucket!). The drive was long, but Dad brought lots of snacks, and we enjoyed the conversation and the scenery. Friday night, rather late, we had dinner in downtown Princeton at a Turkish restaurant, a feast that included a surprise delivery to our table of fresh-baked pitas, which we dipped in house-made hot sauce. We were tired, but we were happy. Flora and I stayed up late watching Friends. On Saturday morning, we breakfasted at the hotel with Grandma and her younger sister and her sister’s husband (who live in Argentina), and my aunt and uncle, who’d all travelled together from Indiana. It was fun. Grandma took one look at me, and sent me back to my room for a sweater (she was sure I’d be chilled due to the A/C), and then led the way, and organized the seating, which should tell you something about her character. She’s 97! I wanted to shout to the room in general, because, honestly, no one would ever guess it. 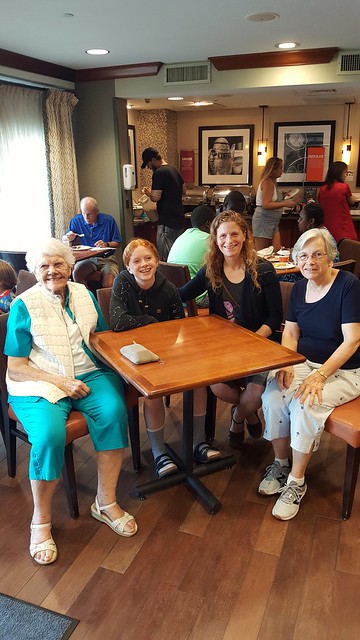 Went back to the hotel to change before more family time that afternoon. Turned on the TV. News of a shooting underway in El Paso, Texas. Turned off TV. Pushed news out of mind. Changed, drove to a quiet tree-lined street near downtown Princeton, the home of one of my dad’s cousins. Feasted on a magnificent spread of appetizers. Went for a walk with Flora. Met more relatives. Visited. Listened to grandma and her sister and sister-in-law tell stories. Laughed. Feasted on a magnificent Argentine meal prepared by my dad’s cousins. Argentine music on the stereo. Red wine. Grandma having to be forcibly stopped from helping with the dishes.

Back at the hotel, Flora and Dad and I visited with Grandma in her hotel room. I returned the earrings I’d borrowed from Grandma. It was Grandma who asked whether we’d heard about the shooting. “He’s evil,” she said. She meant Trump. If you knew my Grandma, you’d know that word was not one she would use lightly. The ferocity of her emotion surprised me, even if I was feeling the same. 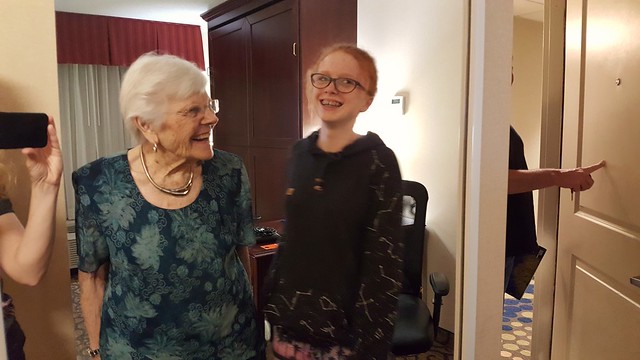 Flora and I spent the rest of the evening goofing off, wandering the hotel, making ourselves tea, tried to stay up late again to watch Friends, but fell asleep instead.

When my alarm sounded at 7AM, I turned on the news, using my CBC radio app — news from Canada. “Almost thirty people killed in less than 24 hours in mass shootings in the United States …” I thought more people had died of their wounds in El Paso, but no — there had been a second shooting overnight, this time in Dayton, Ohio, a city not an hour from where I grew up. The shooter was killed by police within the first minute that he opened fire, but he still killed at least 9 people; this is the scale of damage that can be done with an assault weapon, and in a world where anything made any sense, it would be evidence to silence the “good guy with a gun” theory forever.

In the breakfast area of the hotel, the news of both shootings played on the large-screen TV. The hotel’s guests were visibly disturbed. The feeling in the room was something unlike anything I’d felt before. It wasn’t shock. It was bewilderment, horror, shame. This keeps happening. This is not an anomaly. This is the new normal. How can this be? 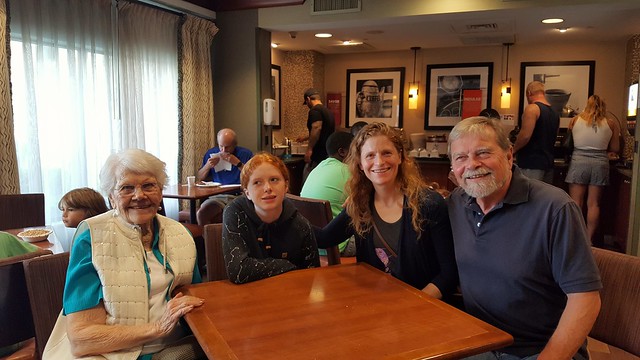 Nevertheless, we had a fun, sociable breakfast with Grandma and everyone else. Briefly, though I don’t think we wanted to go there, the conversation tilted to the causes of this violence. White supremacy. Gun culture. Trump. Racism. White evangelicals — how could they support Trump? But even within our group there was no unity on the solutions. Maybe there are too many solutions, rather then too few?

After our goodbyes, we packed up for the long drive. About half an hour north of Princeton, we drove past Bedminster. It was only later that evening, at home, when I was scouring news sites for opinions and information, that I saw Trump had given his statement (paltry, weak, vague) at his estate in Bedminster, New Jersey. I said, “We drove right by that monster this morning!” And then I thought, good grief, that word rolled out of my mouth unprompted. Do I actually believe he’s a monster? If I call him a monster, what does that make me? And I felt as if rage and hatred was a hole down which I did not want to spiral. Yet I couldn’t turn off the news. I kept scrolling and scrolling, looking for some kind of answer to questions I couldn’t even form. I stayed up till my phone battery was almost dead, at which point, I left my phone downstairs because I knew if I brought it up to bed, I’d never sleep. Would the shootings have affected me in the same way if I hadn’t been in the States when they’d happened? If I hadn’t felt that collective bewilderment in the breakfast area of a Hampton Inn on Highway 1 near Princeton, New Jersey? 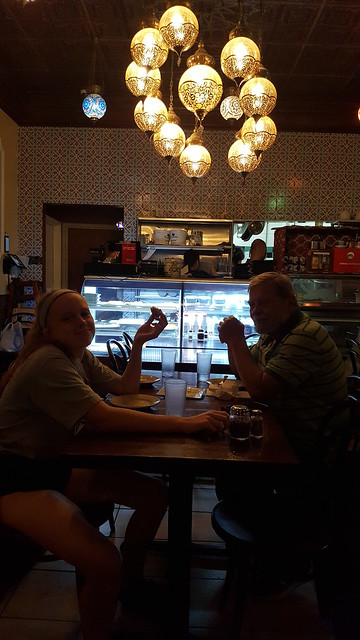 This can’t be healthy — and by this, I mean this obsession with the news, in particular this news (though I’ve also been obsessed, this summer, with news of climate change and melting ice, and the murderers, teenagers, crossing Canada, who haven’t been seen for two weeks, whose motives seem linked with the nihilist beliefs of these American shooters). Should I turn it off? Hide my phone? Do I struggle to turn it off because I’m addicted to the feelings of rage and horror this news incites in me?

I feel a need to respond, and not with tweets or rants. To protest. To be an activist. To try to change the way things are. To work to make a better world. To identify possible change and bulldoze toward it. But I also feel very very tired. Overwhelmed. Bewildered. It’s too much. Enough. Do something!

But what? What narratives am I creating? Isn’t it my job to respond with narrative? A narrative is purposeful and directed, but the news confuses me. A confused mind cannot create narrative. Somehow, I have to un-confuse my mind, and also my spirit.

Things that can't be seen
Reunion