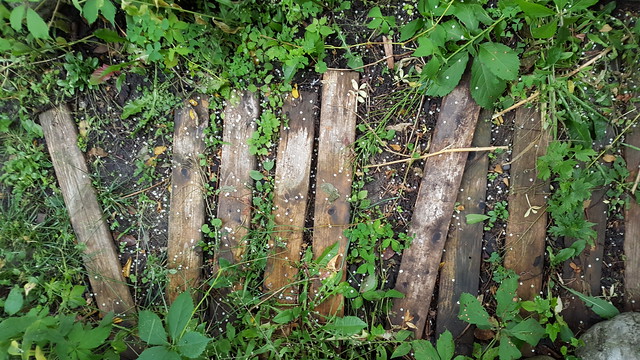 I am someone who keeps an eye on my neighbourhood. I know the comings and goings of many of its residents, in part because I work from home with a window that faces the street, in part because our house is at a transitional section in the neighbourhood, through which much traffic travels on foot, bicycle, and by car, into and out of the uptown core. Across the street, several houses were knocked down last fall to make space for a park, which does not yet exist; it’s a plot of sandy land whose purpose, as yet, seems unclear.

I see, and I remember.

One morning, last week, I saw a woman in the middle of the street pushing a shopping cart. I heard her first, her screams could have been the shouts of girls teasing each other, but I quickly understood this was something else. I went to the front door and saw her in the street, pushing a shopping cart half-filled with what looked like clothing, screaming at a minivan that had stopped so as not to hit her. The van tried to pass, and she took a swing at it, a lit cigarette in her free hand. Then she came into our driveway, pushing the cart, and veered in behind the neighbouring apartment building. At this point, I called the police, my heart racing. I lost sight of her when she went behind the building, but my eldest, whose bedroom window overlooks our backyard, said he’d seen her squeeze through the fence at the back of the apartment building, and run through our neighbour’s yard. She’d abandoned the shopping cart and was carrying several bundles of belongings, shrieking at the world like her brain was fire.

On the phone, the dispatcher asked for a description. Perhaps I should not write down a detailed description here. I’d never seen her in our neighbourhood before. Her thighs were exposed, no pants, though I think she was wearing underwear. A dark blue long-sleeved sweater. Shoes? Flip-flops, I think.

The police did not arrive on my watch. I heard later from other neighbours, who had also called the police, that she was eventually found. A police officer called me later that afternoon to ask follow-up questions on what I’d seen. I could only describe what was on the surface, visible, a rough chronology of a brief series of events. He promised me, when I asked, that the woman had been found and that she would be okay.

What was happening inside her mind to turn her so violent and probably—it’s only occurred to me now—afraid? What happens to a person that they become this untethered to reality? She was out in public without pants. Cursing at anyone who came near. Screaming, slamming her shopping cart into the side of the apartment building, swinging at cars, seemingly in her own version of reality, trapped in a world that must look very different to her than it does to me.

I don’t know what to do with this scene, this snippet of a story that is not a complete story. It only has a beginning, no middle, no end.

I see it happening through the window, and my instinct is to hide. I wonder what people with training in such situations would say or do, what their approach would be, as they’d attempt to intervene. Would they try to bring her back into this world? How would they assess the danger she represents—to herself and/or to others. I wonder how a person can get so lost. What trauma is she expressing, what has she experienced?

I felt afraid of her. Afraid for her.

I keep wondering what my responsibility is as a human being in this situation. As a bystander. A witness. What is the appropriate action to take? And maybe I’m wondering something more, too: what if my responsibility goes deeper? What training or education would I need in order to become more than a bystander or a witness? What if I wanted to get involved, to help, not just to “help” — what would I need to learn?