We make it magical all of a sudden 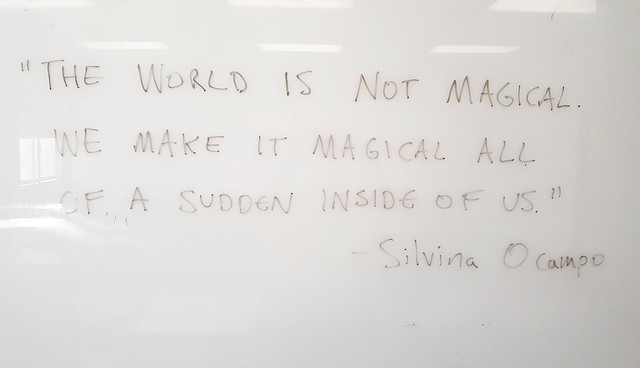 In the past couple of creative writing courses I’ve taught, I’ve devoted an entire class to listening to and writing fairy tales. Why? Sometimes I introduce an exercise without fully understanding its necessity, until I’ve been through it several times. After my fairy tale class yesterday, my brain was spinning, like I’d learned how to spin flax into gold. I may not entirely understand why the fairy tale is so valuable to listen to and enter into, but I’m getting closer.

Fairy tales are full of archetypal imagery: images that are powerful and timeless, even if they may be interpreted differently by different cultures and in different eras. Brothers and sisters; transformations; talking beasts; wise women and witches; kings and queens; red shoes; axes; forests; water. As we wrote our own fairy tales, some of these images no doubt found their way into our stories, and we knew they had meaning beyond themselves, we understood it at gut level. A dark forest conjures a meaning different from a river; the moon means something different from the sun; the power of a witch is different from the power of a king or a queen. Maybe we also understood that the meaning of these images was somehow malleable, too, and that we could work with it, we could subvert it, we could make it our own—we understood that meaning shifts. Sometimes it’s even our duty to shift meaning or fight against it.

Fairy tales are by their nature grim, even gruesome; the characters suffer horrors and sorrow that is difficult to comprehend. And yet the stories are told in a way that makes them enjoyable to listen to—not frightening, but compelling. One of the hardest tasks as a writer is to write about trauma without traumatizing the reader: fairy tales do exactly that. How do fairy tales protect us, even as they reveal traumatic narratives? Perhaps it is in part our detachment from their one-dimensional characters. But I think protection also relies on the use of archetypes to contain and control horror, and shape meaning. 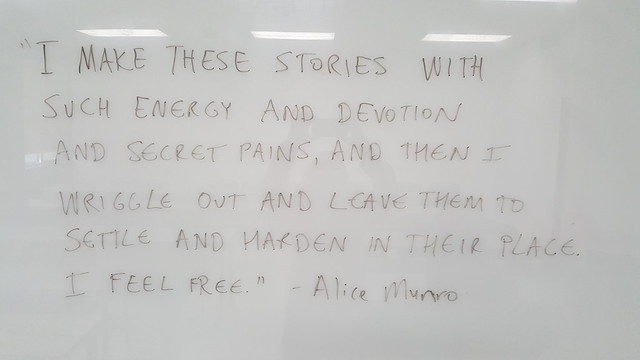 What is the difference between meaning that is political or ideological and meaning that is literary? The world is not magical. In other words, what happens to us is not meaningful, in and of itself. We make it magical: we create the meaning. We impose shape onto the events we witness, onto our own experiences, onto the random gathering of routines, activities, sights and sounds, interactions and reactions that make up our lives—much of what falls through and into our lives is like the weather, out of our control. This could be terrifying, paralyzing. It is not a truth our brains accept easily; in fact, our brains are built to create narrative to explain the randomness, to comfort ourselves, in order to survive and to thrive. The same source of comfort drives our impulse toward religion, politics, and poetry: narrative. We need narrative because we need meaning. Meaning comes from shape, pattern, images that carry thematic weight, from threads being pulled together to weave a tapestry that is so satisfying to our brains that we don’t care that it’s not real because it feels real—it feels as it should.

Why do we seek to understand the motive of a man wielding an AR-15 in a church? (I’ve been wondering and wondering about this, because in my opinion, trying to pin down a motive in cases like this is a waste of our collective energy; but most news media would disagree.) There may be a fundamentally human reason driving this search: because without motive there’s no sense of cause and effect, there is only shapeless unformed chaos resulting in death and grief. Audiences want their stories to make sense, and the news media are storytellers and we are their audience. Think of all the different ways we impose narrative on the world around us—my interest is largely literary, but political narratives are inevitable and create competing storylines that truly fail to intersect. Some narratives exclude, lock out, imprison rather than connect.

How can literary narratives help us? By creating empathy—through windows and doors, through the lens of another’s eyes. By refusing to be ideological. By appealing to our human frailty and flaws—by showing us our possibilities and our hopes, and our failures. By releasing us from our humanness, too, sometimes, the way that fairy tales do. Fiction is inherently unrealistic (even so-called realism). Fiction will always be much more and much less than reality is—it contains both too much or too little of reality to be real. Fiction is interpretation. Fiction pushes the writer to identify what matters in whatever moment is being described. It creates magic inside of us all of a sudden! We become magical when we write and also when we read, because we are transforming what is into what could be—a recreation that has substance, shape, and meaning.

Something from something, as Etger Keret writes.

I wrote this in a white heat of emotionless thought after yesterday’s class, as if it were tearing from me whole: the reason I write, the power of writing, the value of it.

“The world is not magical. We make it magical all of a sudden inside of us.” – Silvana Ocampo

Write these words on my heart.