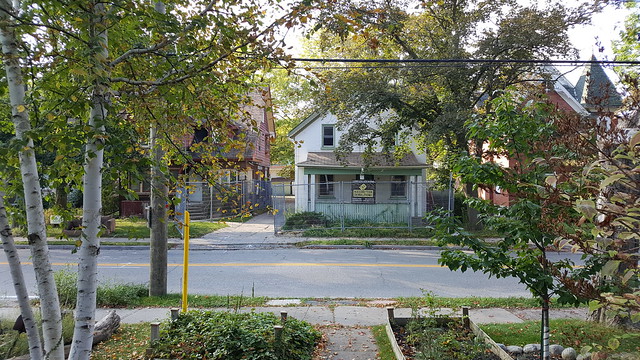 The space across the street from our house is being turned into a park. Many of my front yard photos from the past 14 years have featured this little white house, above. That’s a demolition sign tacked onto its front porch, and a metal fence erected around it. Work began last week. 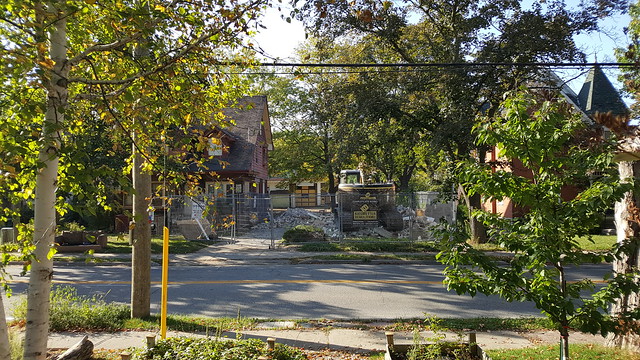 As you can see, the little white house is no more. I was out of the house on the day it came down. The children had a PD day, so I left them to their own devices and exited the scene. I biked to campus and worked like a student in a library carrel, which was blissful. I do have an office, but it’s cramped, weirdly hot, and shared with four other people. The library is infinitely preferable. Anyway, when I got home, the little white house was gone. It had been standing that morning and by late afternoon was nothing but a pile of rubble with a large machine sitting atop. I must confess I was sad to have missed the excitement. I’m the classic nosy neighbour character, observing the proceedings (any proceedings, really) out of various windows and from behind the screen of lilac bushes. In my absence, none of the children watched, apparently. They just complained about the noise. Can you imagine complaining about the noise — the noise of a house getting knocked down! — and not going out to watch? Whose children are these? 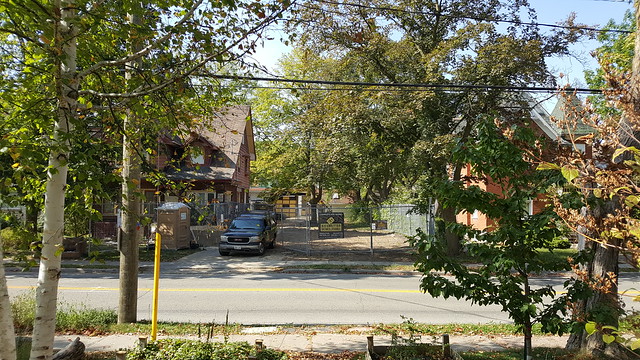 Here is the lot after it got cleaned up. A dump truck was kept very busy. A few more buildings are slated to fall before the park space is completely opened up, so I will keep you posted. Our view is changing.

To get slightly philosophical, before I go pick up my eldest from his part-time job (he bikes to get there, but I don’t like him biking home after dark), I’ve been reflecting on how much dedicated effort and organization it took to clean up the rubble across the street. From one house. With at least three expert-looking people on the site and a dump truck, a large digger machine, a porta-potty and safety fencing at their disposal. And then I think about places devastated by this season’s storms, like Puerto Rico or Houston, and I can’t wrap my head around the effort it will take to clean up and rebuild. 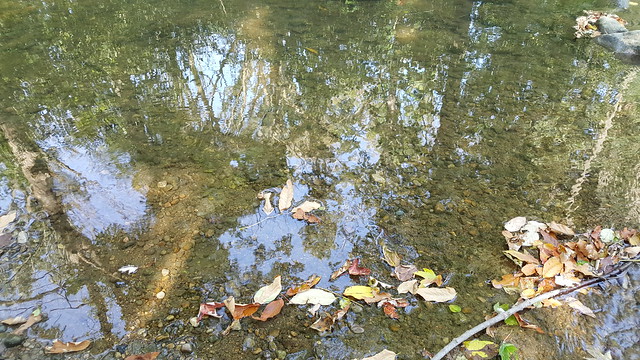 In other news, I’m back to coaching soccer again. Tryouts for next season are already underway (believe it or not). And I’m teaching. So writing time is precious and fleeting and jammed in, but I have to tell you, it’s happening. I’m making it happen! Last night I wrote The End on a first draft — a complete first draft! I have no perspective on its objective merits at this particular moment in time, but I feel ELATED. I truly do. All day, I felt like running around yelling and screaming the news. (But I didn’t.) (I’m so low-key. I’m only telling you guys).

Writing by hand
The world is too much with me