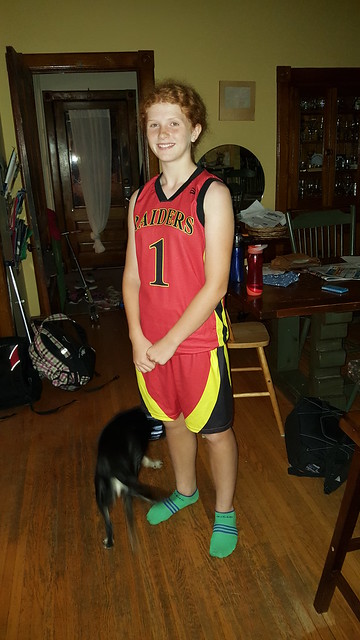 Subject: Writing as an outsider. My chosen venue: a basketball game in a high school on the west side of the city.

When I first arrive, I sit on the wrong side in the wrong set of stands, then notice a dad I vaguely recognize heading in the other direction, and try to discreetly switch ends. It is hard to focus and write because I want to watch and things happen so quickly, end to end and back again. Coach whacking her clipboard on the sidelines, shouting, “Whoo!”, the team scores. My daughter is on the bench looking small in the red and black jersey. The coach wears red too. The other team is white and blue. Girl misses her free throws.

Shoes squeak. Ball pounds on the wooden floor. The sounds are particular to this space. Close your eyes and you would know what you are hearing. Echoing.

Girls are up 4-0 when the teams take an inexplicable break. They have been playing for mere minutes. I don’t understand. The team huddles up with a tall assistant coach who is not wearing red (blue, instead), and the head coach, who is also tall, animated and vocal. I recognize one of the refs from soccer.

The teams play for another minute and take another time out. The refs stand together at the far end, side by side, like identical twins in their black and white striped shirts, long black pants, black shoes, and round heads, one bald, one with short white hair. I know the bald one. They run up and down the court with whistles in their mouths. I don’t know much, but I can see that the coach plays the same five players most of the time. Nine girls sit on the bench and wait.

I should watch instead of writing.

At half-time, the ref who I recognize from soccer comes over to chat. “You don’t watch while your own daughter is on?” “Oh no! When was she on?” “She was on for the last minute.” “Oh man, I totally missed that.” “This is a good team.” “Yes.” “She’s in grade nine, your daughter?” “Yes.” He tells me about how he used to coach basketball and why he quit (a long story).

The buzzer counts down and the next half starts and now I watch with great duty and attention. My daughter does not play again. I don’t know much about basketball, but the same nine players sit on the bench and don’t move for the final quarter. My attention drifts to the clutch of slender teenage boys watching and horsing around with their phones on the lower benches. I recognize one from soccer.

I understand soccer, but not basketball. The team wins by more than 10 points. That seems sufficient.

Afterward, walking across the parking lot, my daughter, who is glowing, says, “Have I converted you to basketball yet?” “I’m really sorry,” I say earnestly, even though I’d intended to keep this opinion to myself, “but I have to admit that I’d rather be watching you run cross country.” “Oh Mom,” she says in a fond tone, “but I want to play basketball.” “I know,” I say, “and that’s what counts. You’re the one who’s doing it! I’m just here to watch.” (And today, I didn’t even do a good job of that.)