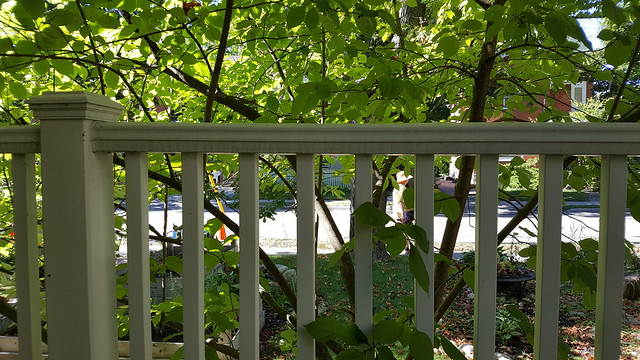 I am sitting outside on my own front porch.

Every few seconds, a car or truck whizzes past, either accelerating as it speeds away from the nearby stop sign or slowing as it approaches. A few cars ignore the stop sign altogether. Now a large cargo truck wheezes past, white with black lettering. In its deceleration it makes a sound like a human cry. A bicycle, red, passes, with its cyclist turning the pedals at a leisurely pace, face inscrutable as he gazes down, away from the sun. 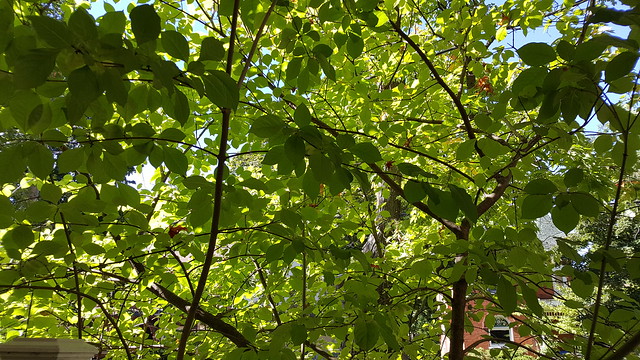 I can hear the hum of machinery from the nearby construction site that is our downtown core. The steady beep-beep-beep of a vehicle forever in reverse. A neighbour shuffles past and does not see me, screened as I am behind the green lilac leaves, which are shaped like teardrops. A light breeze lifts the leaves, and my own loose hair, and my little dog barks from inside the house, growling and yapping at what I now see is a yellow guide dog, strapped into a harness and leading a tall man, who is wearing a backpack, hat and dark glasses, toward our perilous intersection. The man was smiling faintly and gazing slightly to his right, toward our yard. Behind him, about three paces back, a young woman walked, wearing a bright sundress and a floppy hat. Did she know the man? Was she following to keep him safe or staying politely behind him because to pass him would have been to disturb him?

A rustling of fallen leaves. A fat grey squirrel with bushy white-fringed tail inspects our bed of lavender. Earlier, when I was describing the blind man and the woman he may or may not have known, a friend bicycled past — at least I thought it was a friend, but found myself squinting through the leaves to make out her face under the bike helmet. She was wearing grey flowing pants cut short above the ankle, and I thought, those look like pants my friend would wear; but it wasn’t real confirmation. A girl with bleached blond hair and a stocky upright gait passes, holding a white phone to her ear. And now, a couple holding hands, the girl talking, the boy saying nothing. He rubs his head with his free hand. They are not near enough for me to determine their ages. 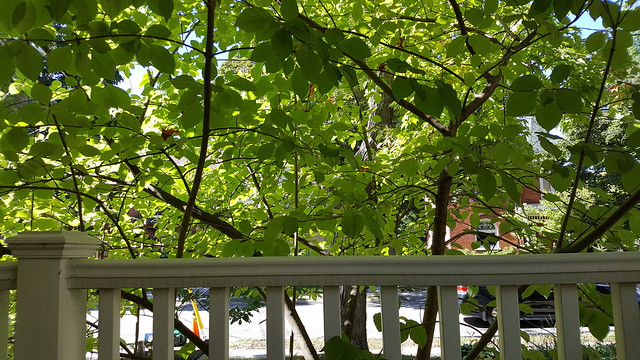 I have forgotten how lovely it is is to sit and record for no purpose at all, only to slide more deeply into the moment, to sit as if immersed in a quietness of the self. A stillness amidst all that is moving and passing me by.

A garbage truck stop, redolent with the smell of rot, sweet and persistent, even after it has turned the corner. What does it smell like? Garbage? I stop and think for awhile, but can’t come up with anything but sweet rot and stink. I can see in my mind’s eye a kitchen, a darkly lit particular kitchen that seems to have come from a dream not from a memory, with a crock lined in newspaper, and filled with blackened moist vegetable peelings, beside the sink; sweet stink. 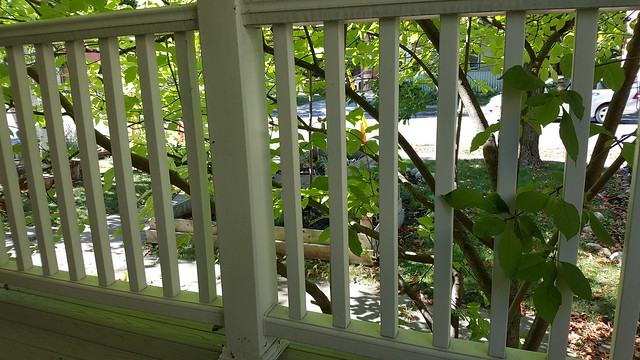 A brittle leaf falls from high overhead, clunking as it passes through the still-green leaves of my lilac, scuffing on the paved path where it lands. A rotund woman in hot pink with a checkerboard skirt eats handfuls of something out of a stiff plastic bag — nuts or seeds? — while she glances at our garden, expressionless. And my dogs set to howling as another dog, a beautiful black lab, tap-tap-taps patiently along the sidewalk in front of our house, leading a young woman with her fair strawberry hair stuck up in a bun at the top of her head, a baby which can’t be seen asleep under a quilt, and strapped to the front of the her chest. The young woman does not hear my dogs’ fuss, because she is plugged into white earbuds.

When the mailman arrives, not long after, I sit perfectly still and wonder whether I should alert him to my presence, but he speaks immediately to the dogs, talking to them through the glass as they bark frantically — “Hello, there, friends! And how are you today!” He flips the lid of our mailbox and is turned and away in an instant, and I watch him walk our stone path, and duck around the back of our truck, his step lively, his manner bright, his form short and plump, jolly as an elf. He has not seen me at all.

Prioritize these things. Seriously
I am running for ...