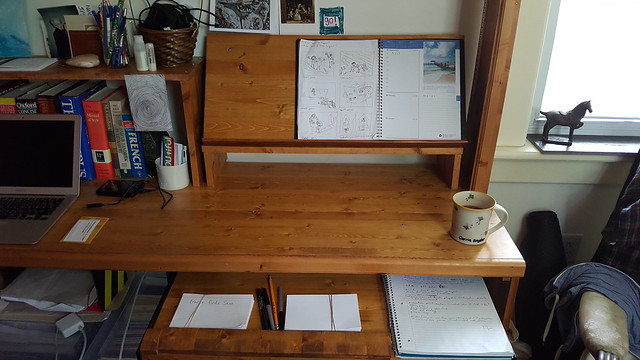 Fifteen minute post on a Tuesday morning, when I’ve just woken my children who were still asleep at 10AM (even the 8-year-old). The cicadas are whining. The day promises to once again be very hot. Another soccer game tonight, out of town. There is a tent set up in our back yard (that same tent!), where children spent Sunday night on a sleepover birthday party adventure. My office has been cleaned and the desk rejigged to make room for drawing (see above). I’ve worked hard since I got home from the writing workshop, but I’ve also felt relaxed, almost mellow, almost almost laid-back. August is a melancholy month. If only it could last longer, a person wishes, as she puts off thinking about the month that follows August, and its scramble to create routine and get back to business. What’s the rush to get back to business? Couldn’t this be business? But a person can’t be in two places at the same time. This peacefulness comes from a different vibe, a different pace. It doesn’t mean we’re doing nothing. It means what we’re doing isn’t always what we have to be doing. Instead, we have more leeway — more time — to do what we please. So much depends on time.

Such as … the invention of a homemade drama camp, in which AppleApple led and directed a small group of neighbourhood kids in a low-key, vivid performance of Roald Dahl’s The Enormous Crocodile.

Such as … Albus, age 15, cooking suppers for an entire week, a project that included menu planning, grocery shopping, cooking, and at least a bit of cleanup. The finale was scalloped potatoes with ham.

Such as … a sleepover camping backyard birthday party.

Such as … everyone helping out with housecleaning chores, because everyone is around to help out.

Such as … watching much of a six-hour Olympic bicycle race on a lazy, otherwise uneventful Saturday.