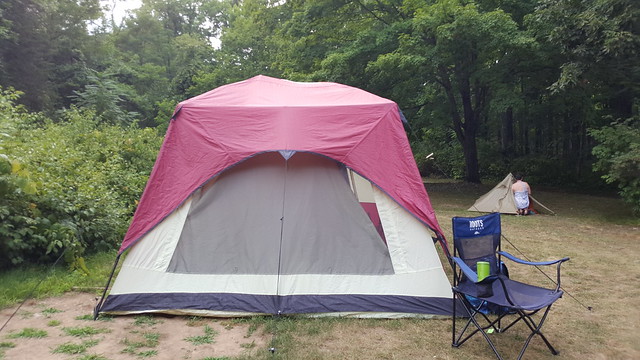 How to sum up an experience like Omega, you ask, sitting in your office, once again, with a dog curled alertly at your feet? A child has just rushed in to tell you that she has gotten to 7 juggles (of the soccer ball, with her feet) in the “summer juggling camp” organized by your husband, to keep your children active and entertained, while you were away.

You were way for six days, but it could have been months. It could have been that you fell down into a different world, unrelated to your own, as vivid, as real, but somehow without connection to your own. You crossed a drawbridge that let itself down, into a small, contained universe which you inhabited almost like you’d become a child again. 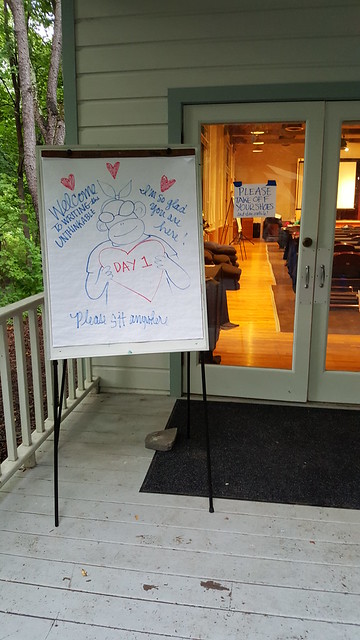 You drew pictures. You wrote by hand. You went to class. You ate meals provided for you, and you compliantly accepted the food that appeared, eating something called “chickpea scramble” for breakfast every morning, almost obediently. You napped on pillows under a table with your fellow classmates. In the evening before bed, you went to tuck shop and bought a snack. You swam in a swampy seaweed infested lake. You laughed till you cried with your friend. You had a camp name. You were, in fact, a child at camp, again.

There were marvellously awful moments, such as when you struggled in full-on sun, sweat pouring off you, to erect an enormous, ridiculous tent, while the campers nearby reminisced about recently hiking the Appalachian Trail, popping up their compact tents in mere minutes. You almost cried, running in the heat to seek out duct tape—for the love of God, duct tape!—to repair your ridiculous and broken tent. And then you slept in luxury on a queen-size mattress, inflated with a motorized roaring machine that irritated those hardier neighbours who had recently hiked the Appalachian Trail.

There was the morning you rose at 4AM to attend a two and a half hour kundalini yoga class, that consisted largely of sitting cross-legged whilst chanting under the instruction of a tone-deaf guru.

There was the heat, the thunder storm, and the morning you had to take the rain-soaked tent down and pack up in the mud, only to be confronted by a breakfast of turmeric-soaked lentils immediately afterward.

But this was bliss. 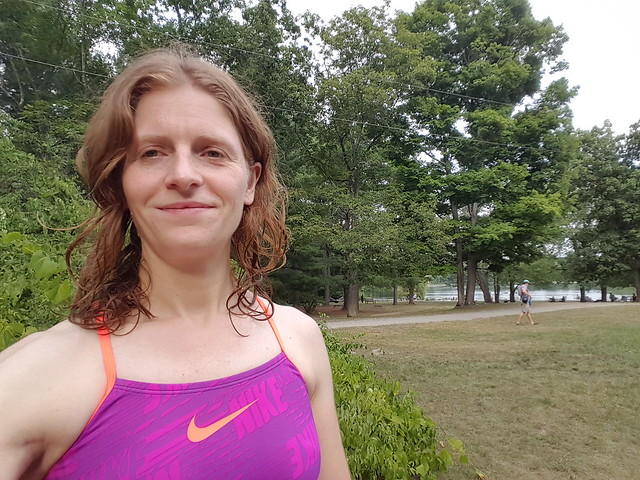 It was blissful to spend hours every day writing and drawing. You didn’t know you could draw. You didn’t know you had characters inside of you, their faces waiting to be seen, their hidden emotions so certain on the page, present in a few quick lines you’d sketched there. After class, you would find your way back to the classroom to work—writing and drawing, drawing and writing. Determined as a child. Delighted as a child. You would want to thank this genius teacher, whose genius is her delight in the process, and her generosity. There was no waste in Lynda Barry’s class. Time was honoured. It was honoured with work, and it was honoured with rest, and it was honoured with delight in what you were all making, individually and together.

You went on this adventure, and you came home again. 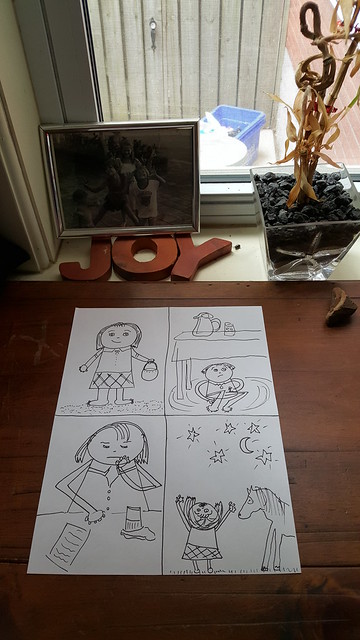