Reading in Envermeu: found in translation 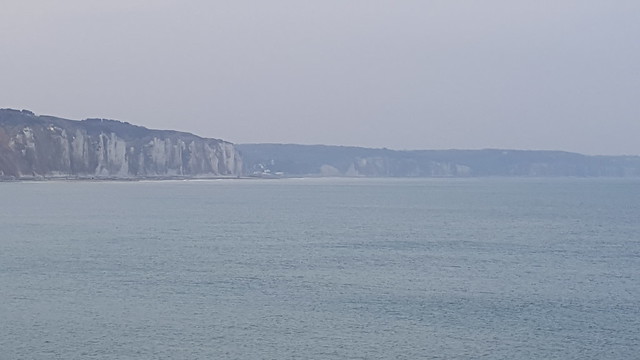 **I am rating this post a PG13: it contains mature language that may offend some, and amuse others. You have been warned.**

When I am immersed in another language, even one that I cannot speak very well, I pick up the cadences and rhythms, the particularities of its grammatical construction, and almost immediately I sound like a foreigner when speaking in my native tongue. That might have been the problem at Saturday night’s reading, during the interview afterward when it may have appeared to the audience that I could speak and understand neither French nor English. Even as I write this, I am hearing these words flow out of me as if spoken in a French accent. A poorly imagined French accent. I apologize.

The woman who read from my book on Saturday night is an actress. She is very tall, slender, and I noticed her backstage immediately because she radiates an unselfconscious beauty, with a face that looks like it is carved, large dark eyes, an expressive mouth, her hair cut short and a bit messy as she ran her fingers through it. On stage, she read marvellously, kinetically, seeming to inhabit Aganetha, to bring her to life. Although my French can only be called deficient, I could understand the text because I know it so well and the translation must be very good. As she read the prologue, tears sprang to my eyes. I felt such pride, as if I were seeing and hearing a child of mine perform upon the stage, but it was something more, too, the gift of seeing what one has made from outside oneself. Perhaps because it was a translation, perhaps because it was being read by someone else—I could appreciate the book’s language, the imagery, the story, the appeal of the character in a new way, in fact in a way I have never before been able to appreciate it. I was moved at different moments during the reading by the story. I was moved by the ideas. But nothing was more moving than the initial surprise of seeing Aganetha come to life. I felt lit up. I felt it was a moment I would not forget.

The actress sitting at a small table on stage, lit from above, leaning in and out of the microphone, her voice changing as she became the characters, her free hand running through her hair. Before her, the text printed out on paper and scribbled all over (necessary cuts to bridge or shorten material). She read for 45 minutes, stopping several times to take a drink of water, once to check discreetly the slender watch on her wrist. At the end, the audience clapped and clapped and did not stop clapping. There was emotion in the room. It was magical. When I stood up to be acknowledged, I was confused, as if it were not of me. The interview on stage immediately afterward was, as I mentioned above, rather clumsy. I felt lost; but maybe I was just dumbstruck, in awe of the moment that had come before. All of my emotion was caught in the before, watching her, watching Aggie.

We drove back to Dieppe in a packed van, and I sat in the front seat beside Marie-Sophie, the actress, who told me about her time in Montreal last year putting on a play. It was late by this point, almost 11PM, and we were very hungry, very tired. The driver rolled down the windows because one of the women in the back was feeling sick. The headlights lit up a small portion of the narrow road and the grass beyond, and we plunged up and down, up and down until I began to feel sick too. Behind us, the women were discussing translation—two were actors who translate plays, and the other was my publisher. “It is not ‘sweet fuck,’” said one. “It is ‘sweet fuck-all.’” “Sweet fuck?” “Sweet fuck-all.” “Sweet fuck-all?” “You can say fucking this fucking that.” “But not sweet fuck? Sweet fuck?” “Sweet fuck-all.” “Ah. Sweet fuck-all.” They went on and on. I started to giggle, but I couldn’t share my laughter with Marie-Sophie or the driver, who were talking to each other past me, as neither seemed to understand what the women were saying. I couldn’t turn around, either, or I would have felt even sicker.

When we got out of the van after driving around the town of Dieppe—the driver was lost—and we were standing disoriented on the sidewalk near the restaurant, one of the women asked me, “How do you say it, ‘sweet fuck,’ or ‘sweet fuck-all’? What does it mean?” “I heard you talking,” I said, laughing. “It sounded like dialogue from a strange play.” “Can you say ‘sweet fuck?’” asked the actress named Kelly, with the Irish grandmother, who will be translating the work I’ve been commissioned to write while in Louviers; she will perform the translated work in Louviers’ museum next week. Kelly has a very sweet, innocent face, a bow-shaped mouth. “Not really,” I said. “What does it mean?” she asked. I said, “Sweet fuck just means … sweet fuck.” “Sweet fuck means sweet fuck,” repeated Dominique, the translator of the Scottish play that had been read earlier in the evening. “Yes,” I said, “like ‘nice lay.’ But we never say it. It’s not a saying.” “Nice lay,” repeated Dominique. “Then ‘sweet fuck-all,’ what does it mean? Does it mean ‘nothing’?” asked Kelly. She pronounced each word individually, so that the phrase did not sound in her mouth like it would sound in mine. Sweet Fuck All. I said, “Sweet fuck-all means ‘I don’t care,’ or ‘it doesn’t matter.’ ‘Nothing matters.’ Or ‘nothing,’ I guess, yes, it means ‘nothing.’”

“This is what I say to my students, when they are learning translation, I say, throw out everything you learned in school, forget it, you know nothing. They want to translate word for word and you cannot, because in language there is not translation, there is only interpretation. There are so many phrases particular to the culture,” said Dominique, as we crossed the street and walked toward the restaurant, where we would eat fish and rice in a cream sauce, a cheese wrapped in pastry, and I would choose the creme brûlée for dessert.

There is one more detail that I want to record, although it does not relate, only in the most peripheral sense. Earlier that evening, I saw a child’s sock, very small, toddler-sized, yellow with green detailing, stuffed with shit and left beside a park bench in the square near the theatre. I looked down and noted its existence as I walked past, I said to myself, that is a child’s sock stuffed with shit. I could imagine the mother or father having to wipe up the child who had shat himself or herself, and in desperation yanking the sock off the child’s foot and saying, there, we’ll leave it, we don’t need it, forget it, it’s a small loss; although all in French, of course.

In Dieppe, France
Do you know what I've done for the last hour?