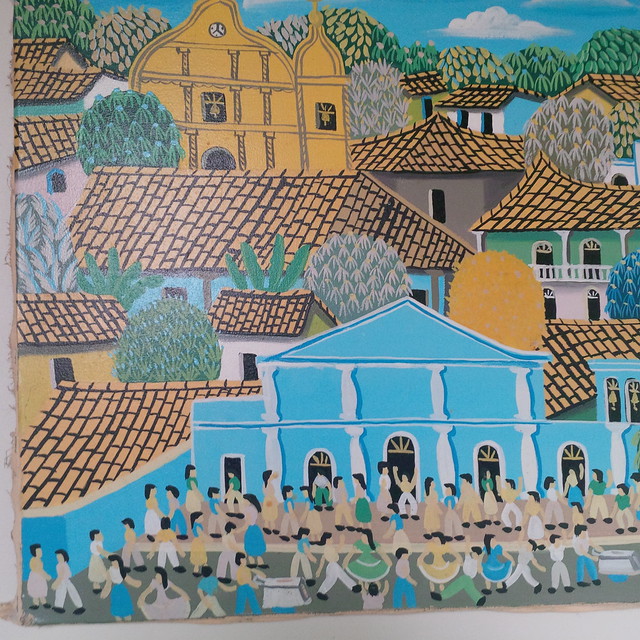 In my previous post, I published a list poem detailing some of the things in our downstairs bathroom (because, why not?). It included the description of a painting that hangs there, and I was amused to notice while brushing my teeth the other day that my description, written from memory, bears little resemblance to the actual painting.

I remembered horses, for example. There are no horses. I remembered the scene being of a marketplace. The scene is clearly of a busy city street.

I like that there are differences between what I remembered and what exists in actual fact, because I think it’s instructive of how memory fictionalizes reality all the time. At least, that’s my theory. And I like that my memory invented horses in the painting. Horses are a touchstone for me. They symbolize the freedom of childhood, but also some of the confusion of childhood too; I think of going to an auction of wild mustangs with my grandpa, in Tennessee, when I was a kid, and realizing it wasn’t anything like I’d imagined. Wild mustangs! We were going to see wild mustangs! But the horses were skinny and dusty and untamed and seemed frightened, being herded through chutes and into pens. And I just felt … sad to see them like that. A sadness I couldn’t express.

At least, that’s what I remember now, thirty years removed from the experience.

I could write a poem about it, probably. Perhaps I should.

A friend wondered why I’d specified, in the previous post, that the line poem exercise be written by hand, rather than typed — it’s a good question, and here are my reasons. For practical purposes, it keeps laptops off desks in the classroom. But for even more practical purposes, writing by hand forces you to pour out your ideas less automatically, more deliberately. You can’t help but slow down, as pen tries to keep up with train of thought. The exercises we do call for a lot of scribbling, scrawled point form or almost shapeless idea-noting, and even some doodling: this happens best on paper. Finally, writing is a craft and there is something tangible about words written on a page. You can see that words are building blocks, you can move them around, remove them, play with them. So that’s why. (She says, as she types this post via keyboard onto screen.)

In other news, I’ve been working on a ridiculously long post that may or may not actually come into being. It’s really too long to be posted here, but I don’t have a better forum on which to share it. If and when I post it, I’ll give you a heads-up so that if you don’t want delve into a long-form manifesto on art, you can’t skip it! I think it’s an important subject, but I also don’t want to lose readers.

Writing class
Wade in the water