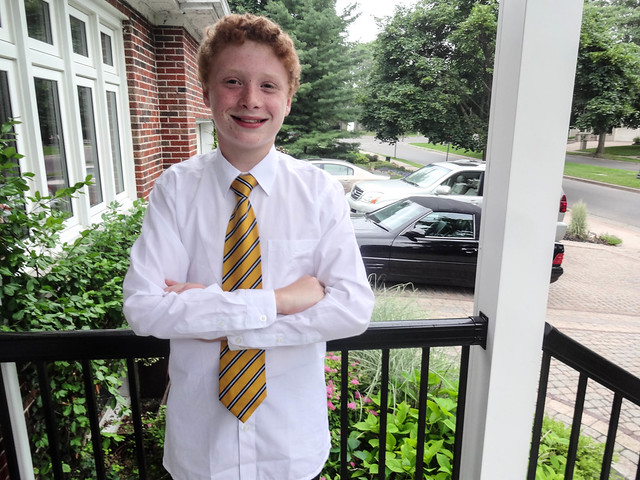 Oh yeah, I’m a month late: this guy graduated from grade eight. Here’s how he looked on the big night. In June.

Last week I had a very Carrie idea, the sort that might make my children wish they had another mother, at least just a little bit. Our eldest doesn’t read much. And I’d noticed that some of my children seemed to have forgotten how to spell since leaving school last month. What to do, what to do? The idea came to me and breathlessly I spat it out! I said I would now be assigning a book report, once a week. Yes, they would have to read at least one book a week and write a report on it, which (I was spitballing here) they would then present to the family, every Sunday evening this summer.

I then dropped the mic and excused myself to go work on my Favourite Mother of All Time acceptance speech. Just in case. Because you never know.

(This comes as such a surprise! I’m in shock, look at me, I didn’t even brush my hair — and am I wearing my nightgown? Yes I am and screw it, who cares!! They love me, they really love me!)

Albus wasn’t so keen on the reading part, especially when I specified that the book must be at or near his actual reading level. As an option, I said he could read a magazine or newspaper article, and he made a lame attempt, flipping through a Chatelaine magazine (he was drawn by the picture of an indescribably scrumptious-looking burger on the front, amusingly, the same picture that had inspired me to buy the magazine in the first place). But nothing spoke to him (really? nothing in a women’s lifestyle magazine speaks to you, young man??), and I wouldn’t let him present on a burger recipe. So he requested a special pardon—could he instead write a story rather than read a book and write a report?

COULD HE WRITE A STORY??!

Sunday evening. We gather round (most of us in pyjamas, me in my nightgown, as it happens). One by one the kids read out their book reports and stories. CJ reports that he likes a certain picture book called The Candy Conspiracy (his original report read, in total, “I like this book,” but he was pushed to go a bit further) because of the tips, and the Juicy Jelly Worm, and the kids. He did write this all down, so the judges give him a high five.

Fooey doesn’t want her report read out loud. It’s on Harry Potter and the Philospher’s Stone, a book that she couldn’t put down, it was like being swept up in a river, she writes, an inventive metaphor that pleases her mother very much. Printed by hand, three pages long, very tidy writing, and hardly a spelling mistake to be found.

AppleApple reads her report off of her Google Drive account: a thoughtful three-page reflection on Jane Eyre, with particular interest in its religious content and pre-feminist qualities. So yes. She did her homework.

Albus reads an entertaining story he’s composed on the computer about a character who lives in the dishwasher, and who is haunted by a tale told to him by an oldster in the midst—a wooden spoon who has visited the back yard and is certain he’s seen a fox chasing a bear. (The comical part is that from the spoon’s description it’s clear the fox and the bear are nothing more than squirrels.) Well structured, excellent comic stylings, and winning characters; I suspect he put more effort into this than he did into the bulk of his school projects all year, but I am nevertheless beaming with pride.

I finish with the sad story of Wave, a memoir by a woman who lost her husband, two young sons, and her parents in the tsunami of 2004. The book is about her life after this loss, although it opens with an intensely riveting scene in which they are lost while somehow she survives in this massive sudden wave of destruction. I promise the kids we live nowhere near a tsunami-zone. But I can see that the younger two are quite upset at the thought of a mother losing her children, or her children being lost. Good job, Mom. So perhaps not the best note to end on.

But back to Wave: It is a powerful memoir, if you want to take it on. It isn’t as hard to read as you might imagine. Sonali Derayinagala is a lovely writer. And she carries you right into the void of what it would be like to lose all of the people who make you who you are, most fundamentally. Who is she, without them?

It isn’t a question any of us would want to answer.

Oh dear, I’ve reproduced our evening rather too perfectly. I’ve ended on a downer. I do apologize. Now, keep reading, keep reporting. And get back to me on Sunday.

Where we are, with #links
Two summer salads