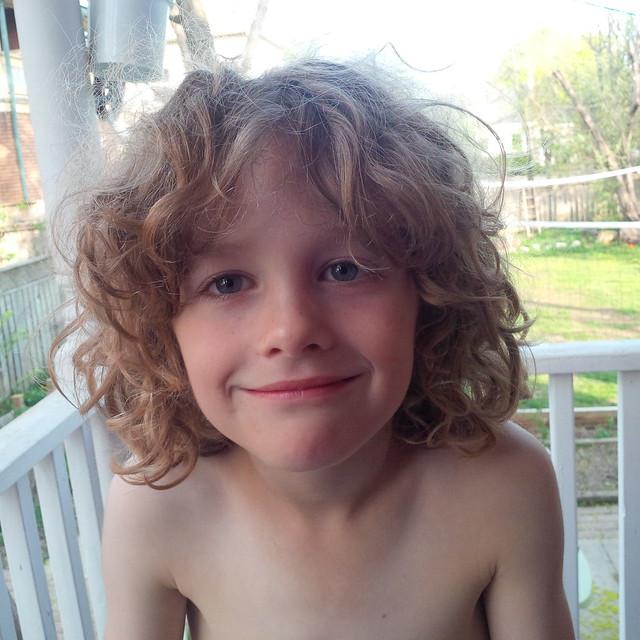 I know he looks awesome, like a wild child, but he couldn’t see to play the piano, or soccer, and he absolutely refused to wear a headband or a ponytail of any kind–even the kind called a “man-bun” (why?!)–and even though his sister told him he looked “adorable,” after which she privately and with squeaky delight told me “he looks like a sweet little girl!” Anyway. What you can’t see are the snarls and dreadlocks. After his first soccer game, during which he really couldn’t see, he agreed to a summer cut, which he can grow out as long as he likes until next summer, when we will reassess again. 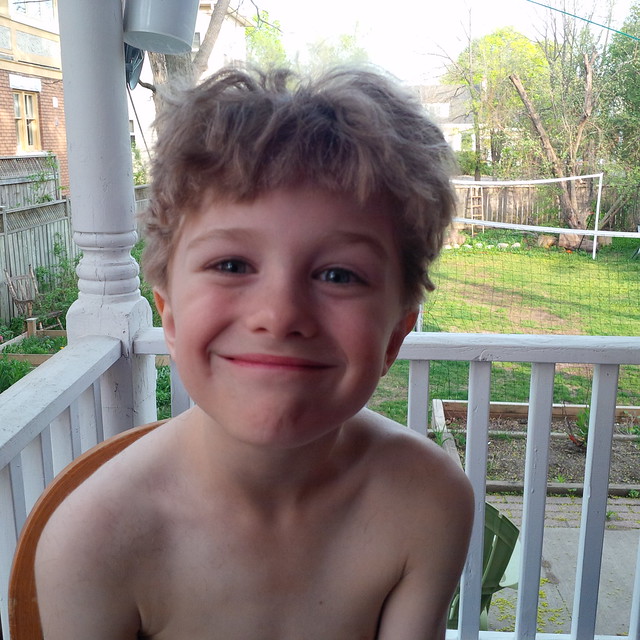 I mean, it’s not like he isn’t perfectly wonderful either way. He just looks a little more clean-cut than we’re used to. 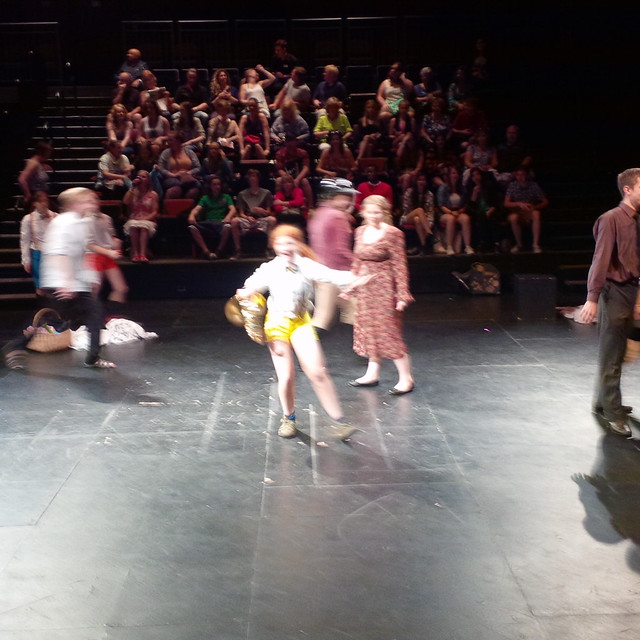 For some reason, I also wanted to write briefly about our funny drive, yesterday evening, to see AppleApple’s play, with a car packed full of children. AppleApple was already at the theatre, and we were ferrying her three siblings, plus two friends, a boy and a girl, who were seated (unfortunately for them!) on either side of Albus, who had decided at the very last minute that he might need a snack to sustain him through the performance, and who had therefore brought along a plastic bag into which he’d stuffed two pieces of chicken/mushroom pizza. The entire drive was a comical, looping exchange, mostly between Albus and me, regarding the pizza-eating plan. Would he eat it now? Mightn’t he get pizza sauce on the people seated next to him, both dressed very nicely? Or even on himself, dressed rather less nicely? Or would he sneak it into the theatre for a mid-play nosh? (What? No!) But look–he’d conveniently brought along a plastic bag for sneaking purposes, he could tuck it under his shirt. Or would he eat it while walking from the parking garage to the theatre? Both pieces or just one? How hungry was he, exactly? Why? Why the pizza? Why now?

I think AppleApple’s friends were at least mildly amused by his antics, which certainly gave shape to the conversation for the whole drive. Something about the scene summed up for me what it means to have a teenager around: kid inventing his own fun out of a situation he doesn’t particularly want to be in, and parents not really getting what’s going on and being mildly amused/mildly annoyed by the whole scenario. Anyway, I wanted to remember it. So there you have it, for the record. He turns 14 in a week and a half. (I also cut his hair on Friday after school, but he doesn’t like me taking photos of him anymore. So that’s a photo of AppleApple mugging for the audience as the play was about to start–with her French horn, which she played beautifully to open the show.)

For the record, on the subject of work/life balance, at which I am certainly no expert
On the periphery of loss