An exercise that is not interested in right or wrong 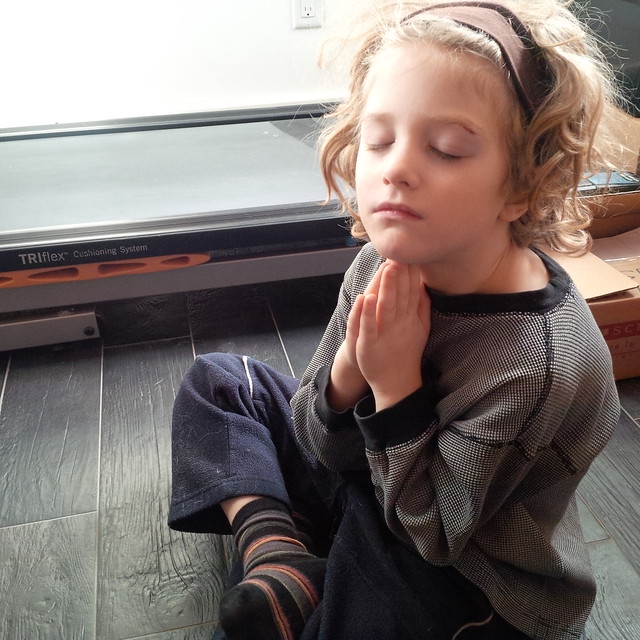 Yesterday, my youngest stayed home from school. I didn’t want to alter my routine too drastically and he is old enough now to be accommodating and to entertain himself quite easily. I said I was going to meditate for twenty minutes, and he was okay with it, especially when I told him to bring his little mini-super-hero figures into my office so he could play while I meditated. I told him he could make noise, but please not to ask me for anything for those twenty minutes (genuine emergencies excepted; but the beauty of having an office is that the kids already know that rule about interrupting me).

He played for the first ten minutes or so. Then I heard him leave. I heard him come back. And it got very quiet. I knew he was in the room with me, but I didn’t know what he was doing.

When I opened my eyes at the end of the exercise, that’s what I saw: see photo above. He was meditating. He had chosen to sit cross-legged with his hands in a prayer position. This is not how I sit when I meditate. He wasn’t copying me; it was the position he chose on his own. When I asked him about why he’d chosen to sit that way, he couldn’t explain it. He had a few questions about the voice in the computer (I use a guided meditation app). Who was that man, and is he real, and can other people hear him too?

I have a couple of observations about meditating. I love it. Or maybe I only have one observation. That’s it. Clearly this is something my mind takes to; reminds me of running, a bit, how when I found the running, it seemed to answer some question in me that I hadn’t known was there, silently being asked.

I love following the tracks of my thoughts into a corner of the mind where I am suddenly falling backward into deep snow and staring at an enormous open sky, in awe.

Even today, meditating alone (with dog snoring at my feet), with my mind in a state of apparent dissatisfaction–even today, I loved the exercise. Why?

My mind flitted today, ran everywhere, often to places I did not want to be.

I kept returning to breath and that helped, but didn’t cure what ailed my mind, its anxiety that I was doing everything wrong.

But you know what? Even while I worried, I knew on a deeper level: This is not an exercise interested in right or wrong. Do it, and it counts. You will learn something, every time. Not necessarily something big and astonishing. But something interesting–it’s waiting to be found, every single time. Today’s exercise was a good reminder to the frustrated, dissatisfied self: you won’t always think you’re doing a good job at the tasks you’re doing; maybe you’re even right about that. But the real work isn’t confined to a single instance, it’s in the accumulation of many instances. It’s in repetition of effort, and returning again and again to the discipline you’ve chosen to get to know more deeply. You can’t know in advance where it’s taking you. You don’t know exactly what you’re making. But that’s the beauty and the mystery.

Sitting in stillness amidst the whirl
Readings, swearing, challenges, and forgetting to set the alarm