This morning began unusually. I woke at 6AM, refreshed after a very very long sleep, having crashed out just after 9PM last night. Teaching takes a lot of energy, at least for someone who would skew toward introverted on the personality continuum, and I had my class on Wednesday night (a happy place to spend three hours, I must tell you, even though our windowless brick room in a hive-like building resembles a bunker, and gets very muggy when packed out with creativity and debate). What a day to go and teach. I think it was a good thing, as it forced me to be focused and to pay attention to something other than the noise.

There was some noise on Wednesday. There was this lovely interview done by the Canadian Press, which ran in various media outlets. There was the phone call from the Writers’ Trust to confirm that Girl Runner was on the list, and various emails to note upcoming appearances and media requests associated with the award. I checked my calendar a lot. And my phone. Twitter and Facebook kept pulling me in. It was a lot of noise, as I say, and I found myself unable to settle and reflect, or even, quite, to feel what was happening.

So I was grateful to my students for occupying my evening. We talked about poetry. There was so much to learn from the discussion, so many reminders of why poetry matters, why words matter.

Kevin had gotten take-out ramen for supper, which I reheated in our shiny new microwave when I got home, nearing 10PM. (Yes, we finally got a microwave, and I must confess my leftover lunches are much more enticing than those consumed during our long, cold pre-microwave era.) After eating, all the kids in bed, Kevin dug through his scotch collection (so many bottles, each with an inch or three of liquid, leftover from our years of hosting scotch parties), and pulled out a particularly choice selection. I don’t have the name handy. But he went online to check its current value, were it full and unopened, and announced that we would be celebrating with a $5,000 bottle of scotch. I mean, seriously?! There was just enough for two wee drams.

One of the pleasures of the scotch party is hearing our friend Mike read the tasting notes, so to keep with tradition, I will tell you that this ridiculously pricey scotch tasted heavily of oak barrels, with overtones of straw (or was that the colour?) and undertones of turmeric and cinnamon. Or something like that. Maybe it was nutmeg. And a bit of blue sky.

It was a lovely celebration. I was up five hours later to run with my speedy friend Heather, who kindly slowed down for the occasion; also because that will be my last run before I attempt the Toad, tomorrow morning: 25 kilometres of likely-to-be-muddy trail. God help me.

The book I was reading this morning is called A Tale for the Time Being, by Ruth Ozeki. I’m going to keep talking about it until I’m done, and probably for a long time thereafter, and the next reader I’ve got in mind is my 11-year-old daughter.* We’re both of us possessed of a lot of energy and drive (I hazard to suggest she’s got even more of both than I do), and we both of us need to find ways and reasons to turn down the noise and become still. (And not because we’re crashing!) 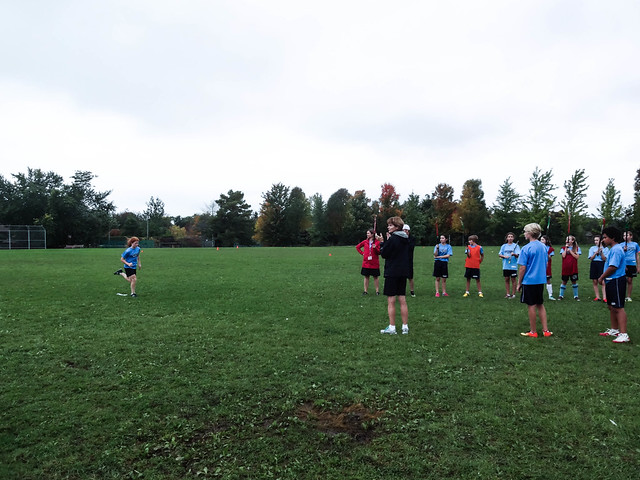 Wednesday, after the prize announcement and before teaching, I dashed over to her school to watch her run a cross-country race. She came second out of a large field of 7th and 8th graders. “I’m so tired! Weirdly tired! Like way too tired!” she told me immediately afterward as she lay prone on the grass. “You just ran three kilometres really fast,” I pointed out. “That’s not it!” “Well, maybe you’re too frail and shouldn’t run more than 200 metres,” I suggested, tongue in cheek. She’s read Girl Runner. She smiled faintly. Then she sat up and took off her shoes. “My feet are too hot!” 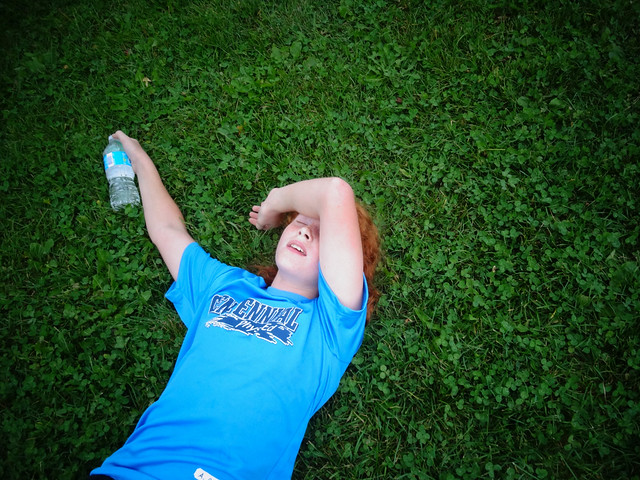 At first, she was quite disappointed in her performance, and it mattered not when I pointed out that the girl who finished first was two heads taller and a grade older. She insisted on expecting better of herself. I kept assuring her that she’d been wonderful, that she’d given her all, that I was very proud, and finally, much later, before bed, she smiled to reassure me that she was happy with the race. Mostly. I can’t argue with her. Her expectations are her own. She isn’t discouraged when she doesn’t meet them. Instead, her expectations seem to fire her with greater focus and renewed intent. Yeah. I get that. There will always be someone faster, smarter, more talented. But I think she already knows: that it’s not about comparisons. It’s about finding one’s own voice, one’s own passion.

A Tale for the Time Being is the story, in part, of a 104-year-old Buddhist nun who’s offered decades to the practice of meditation, prayer, ritual gratitude for each gift, no matter how small. She bows with her whole body to the world. She is at peace with mortality. The humility of her daily practice gives her SUPAPOWAs! Even her physical frailty is a strength.

So I wake this morning, early, thinking about how whatever I have to offer must come from a grounded place, a place where I sit in stillness and silence, practicing gratitude, bowing with my whole body to this beautiful, difficult, scary, noisy world, with openness and with humility. A gift is a gift. What to do with it? How to give thanks? How to give, no matter how tired, frail, mortal, flawed? How to be still. How to listen.

PS I’d like to point you toward a review of Girl Runner by a blog-reader who is an Ironman athlete and writer; he also digs into the history of women’s long distance running.

* Note: after writing this post, I finished A Tale for the Time Being, and discovered that in the final third of the book, there are several extremely dark scenes relating to extreme bullying, attempted rape, and child prostitution, and although my 11-year-old is a mature reader, I don’t think the book is meant for her–not yet. But sections of the book are meant for her! However, I can’t figure out how to carve out the darkness to show her the light. I think this Tale for the Time Being will have to wait, for the time being. Nevertheless I highly recommend it to a mature adult audience. What is light without shadow? (The book also contains the clearest explanation of quantum mechanics that I’ve ever read.)

So, this just happened
You're stronger than you think