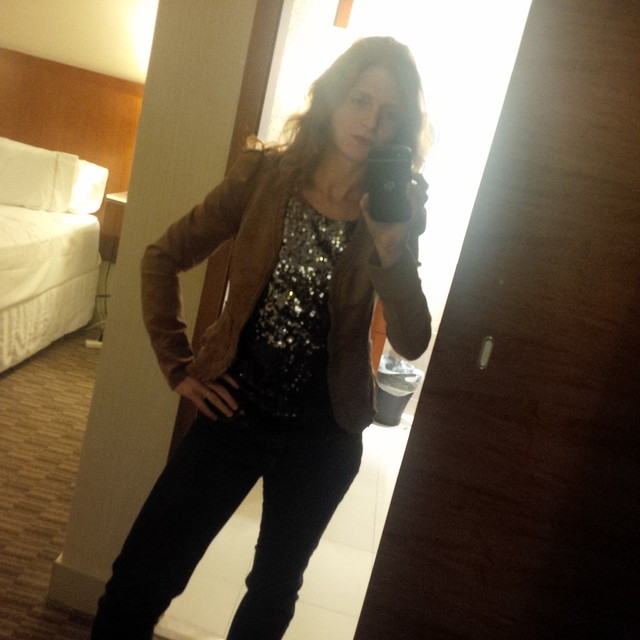 The Weather Network says that it’s 8 degrees, feels like 6. It also tells me that there was a small earthquake yesterday in Banff. Coincidentally, I’m going to Banff this afternoon. This reminds of the time I was going to Calgary and they had an underground electrical fire and all the power went out downtown for a few days. Oh wait. I’ve only been to Calgary twice. That was this time. And the power was all back on by the time I arrived.

But the mayor of Calgary, the most awesome mayor in the world, Naheed Nenshi, was unable, due to the electrical fire, to attend a Wordfest event last night called a Literary Death Match. He was going to be one of the judges. (Literary Death Match is a thing. Look it up. Adrian Todd Zuniga, the fellow in the electric blue suit with the pomaded hair, who appears to have invented the event wholesale, runs an excellent circus.)

I got called in very very last minute to fill in for Mayor Nenshi. My biggest moment, possibly ever, let’s be honest. Not necessarily the best news for the audience, however, let’s also be honest. But because Mayor Nenshi was such big shoes to fill, I was only one half of his replacement. The other half was a comedian named Chris, whose last name I can’t find on the internet anywhere*. But he also had long red hair, so we kind of matched. Only he had a beard and was funnier. We were judging “intangibles.” The other judges were Johanna Skibsrud on “literary merit,” and Mark Tewksbury on “performance.” (I was sitting by Mark Tewksbury! I was offering moral support to Mark Tewskbury! I was hamming it up with Mark Tewksbury! And Johanna Skibsrud!)

It was, hands-down, the most entertaining literary event I’ve ever attended. I woke up this morning, imagining myself killing it at the “Gals and Good Times” panel I’m on this morning (because that’s what you do at a Literary Death Match; or you try to, anyway.) I imagined myself saying, in my allotted 2 minutes to speak about my book, I was here in this same theatre last night for a Literary Death Match, and I’m afraid it’s going to affect today’s performance. First, I’m a bit hungover. Second, I’m going to swear and mention body parts in an effort to get laughs. Third, I’m going to think I’m actually funny.

So, yeah. Let’s not do that, shall we. Let’s drink several bottles of water, take our vitamins, and stop blogging. Now.

I’m off to shower, eat, and attempt to look presentable. Wish me luck, please. And also with the earthquakes and underground electrical fires.

*Found it. Chris Gordon. He swears and mentions body parts a lot. In person, he is hilarious.

In Calgary, anonymous hotel room
In Banff, with mountains