On and off, out and about

I’ve been on and off this weekend. It’s harder to be on than off, and I wish sometimes to have been born an extrovert, feeding off the energy of being out there in the world, but the truth is that I’m the one wearing the ear plugs, drinking the cold coffee, in the comfy sweatshirt and crocs, hair in a messy bun, smelly dogs snoring nearby, cozy, informal, lost in her own head. And when I’m asked to be a woman with a measure of formal poise and polish, it takes some inner cinching, like I have to put on a corset and sniff smelling salts and throw my shoulders back in an effort to practice posture taught in some long-ago comportment class.

Yet that is part of what I do, as a writer. It’s part of the job. I don’t just stay at home in my comfy pants. When requested, I go out and address an audience, I attempt a performance. While trying to be myself.

I do my best, I guess, is what I’m saying, in a situation that takes me out of my comfort zone.

I don’t know why I feel compelled to be ever-improving, but my approach is that being taken out of one’s comfort zone is a good exercise for the spirit. It can be humbling. It can be enlightening. It can be neither of those things, and still be a good and decent practice to attempt. 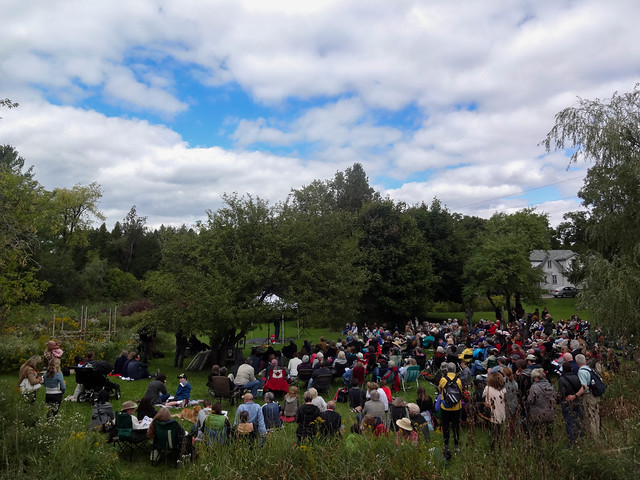 At my launch party, I was one writer among friends, family, neighbours. It was so easy to be on. At Eden Mills Writers Festival yesterday, I was one writer among many writers, none of them old friends, family or neighbours. It was much more challenging to be on. There was a moment when I plunked down in the one free chair in the cottage which functioned as the “artists’ room” while Eleanor Catton, fresh off a plane from New Zealand, sat on the floor nearby. I couldn’t think of a thing to say to her. (Should I have offered her the chair?) I was ridiculously tired and it was only 4PM. I’d done my reading, signed books, talked to people, circulated, listening to other readings, found myself in tears listening to Miriam Toews’s, talked to more people, finally looking for a place to rest for a bit — but the rest I craved was for my mind, not my body. So many good writers, all in one crowded cottage room! It felt like ideas were everywhere and I could not properly absorb any of them. I grabbed the empty chair and sat like a stone. I felt, I guess, overwhelmed by the circumstances. (It probably didn’t help that I was wearing red rubber boots.) What to say to Heather O’Neill? Lynn Coady? Miriam Toews? David Bezmozgis? (I don’t know!)

Maybe I’ll think of something next time. This is just the beginning of the fall touring season here in literary Canada, and many of these same writers will be popping up at festivals elsewhere. Maybe what I’m feeling is a touch of impostor syndrome. Maybe it’s basic shyness. Maybe it’s an excess of stimulus. Maybe it’s cognitive dissonance. Maybe it’s nothing I need to overcome, just accept–that I will be tired after reading and speaking to people, that I will need to sit still like a stone for a bit to recover. I did recover. The afternoon went on. I made a new friend, a poet from Winnipeg named Katherena Vermette, who won the Governor-General’s Award for poetry last fall. I ate pie sitting beside Leon Rooke, across from Thomas King. (Though I didn’t know what to say to them either, truth be told.) 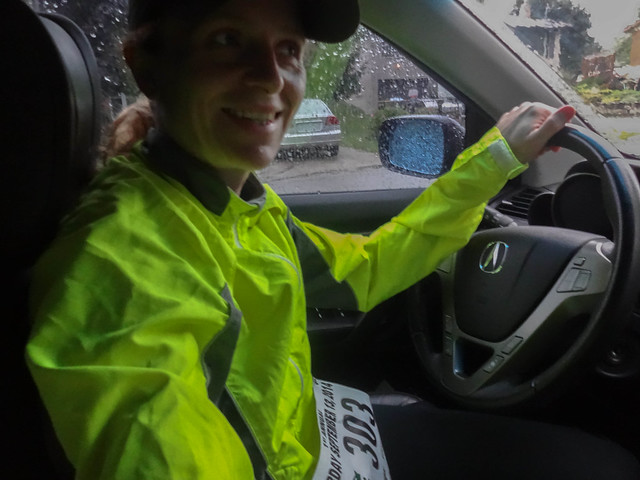 Perhaps it’s telling that my most cherished moment of the weekend was an “off” moment. What I mean is that I wasn’t “on,” I wasn’t performing, I wasn’t trying to connect in any way. I was running a race. It’s been nearly two years since I ran a race. On a last-minute whim, I signed up for a half-marathon that covered country roads not far from here. I went alone and ran alone. My watch didn’t even work, so I just ran. It wasn’t easy, but it wasn’t taxing, if you know what I mean. I knew what I needed to do. I waited for all the things I expected to happen to happen, and they did. I pushed harder and faster as the race went on. My mind lost the capacity to do anything but propel me forward. It hurt and I knew it wouldn’t hurt me. For motivation during the last couple of kilometres, I imagined my 11-year-old daughter telling me not to give up–You’re almost done! I imagined her saying in a slightly exasperated tone. Don’t slow down now! So I didn’t. I crossed the finish line alone. I drove home alone. I went on with my ordinary every day, practically bursting with pride at the speed I’d managed, the pace I’d kept.

Ten tips from an organized life
This is of the moment