Life in the summer lane 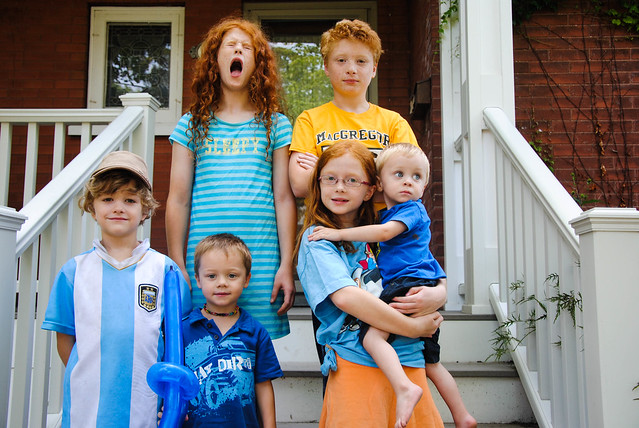 Be warned: this is a photo-heavy post, and a little behind the times in terms of news items. Apparently summer has decided to kick into fast-forward and honestly, I can’t keep up. I don’t even want to. This morning, driving with a friend to our spin & kettle bell class, we saw that it was dark. It was also early, and for most of the year, darkness is to be expected at this hour, but we’ve been spoiled by summer’s long light, and it didn’t seem like it should already be contracting. August is a melancholy month. Always is. I fight against the melancholy because after all, it’s still summer. But even the youngest of our crew is noticing: “Is it fall?” CJ asked yesterday, as we sat out in the back yard watching Kevin dismantle our rotting picnic table. “No! It’s still summer!” I said. “Why did you think it might be fall already?” “The leaves are falling,” he said. And so they were, some of them, enough to dot the grass, into which a path has been worn by the soccer ball being played back and forth, back and forth, obsessively this summer. 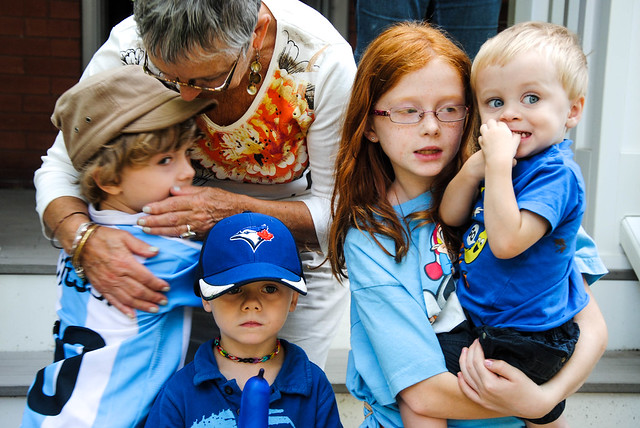 We haven’t gotten to all of the tasks we’d meant to. Our to-do list seems as long as ever. But we’ve also had afternoons like yesterday, mild, breezy, sunny, when I sat reading out loud to the kids from a book of old English folk tales. And weekends like the one before, when cousins came to stay. And two visits to the Stratford Festival in just over a week: first, with Kevin to see King Lear (and celebrate our 15th wedding anniversary), and then on Saturday with the girls to see A Midsummer Night’s Dream. As we walked uptown to the carshare, we realized how unusual this grouping was: me and my girls, just the three of us. We really had fun. We got dressed up. We had a picnic by the river and named the swan and seagull who tried (unsuccessfully) to befriend us (Swanda and Seagram). We chose a feathery mask in the gift shop that we all could share. And we got a treat at DQ afterward, tapping into a gift card Fooey had gotten for her birthday. “This day feels like an adventure,” one of them observed as we drove home past fields of corn and turning wheat. 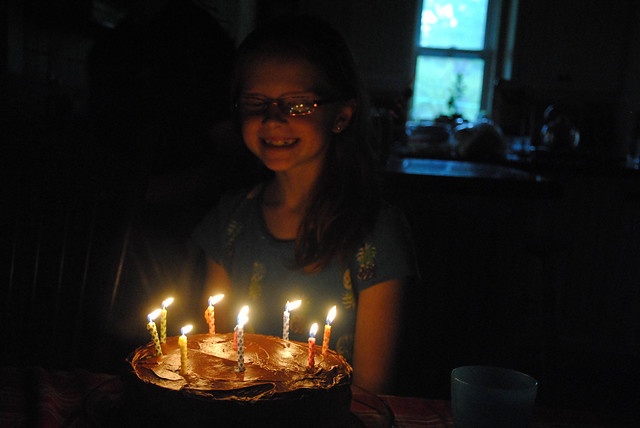 And Fooey has had her birthday, celebrated now many times over. I’m weak, speaking parentally. We allowed her, as her birthday gift, to purchase her own iPod Touch. Our three eldest now have this electronic device, and I don’t love it, but I don’t hate it, either. Here she is on birthday eve. 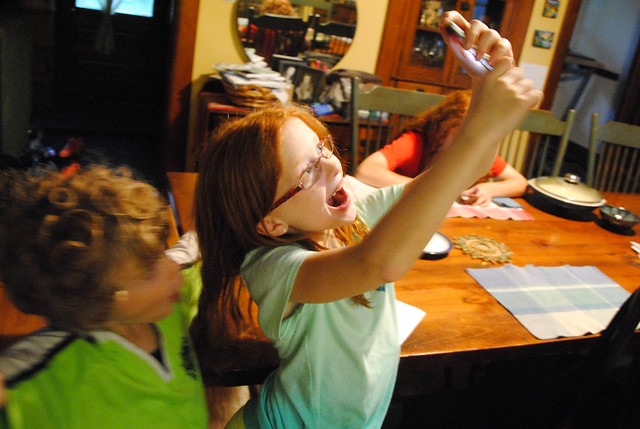 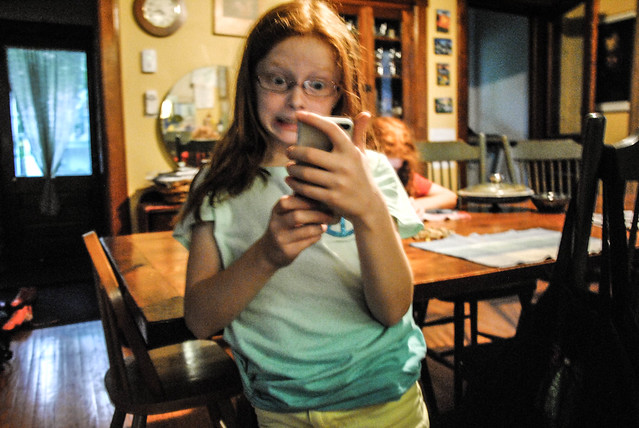 And here she is on her actual birthday. 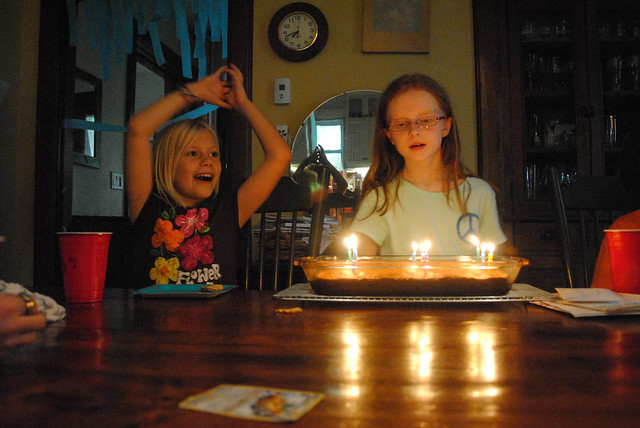 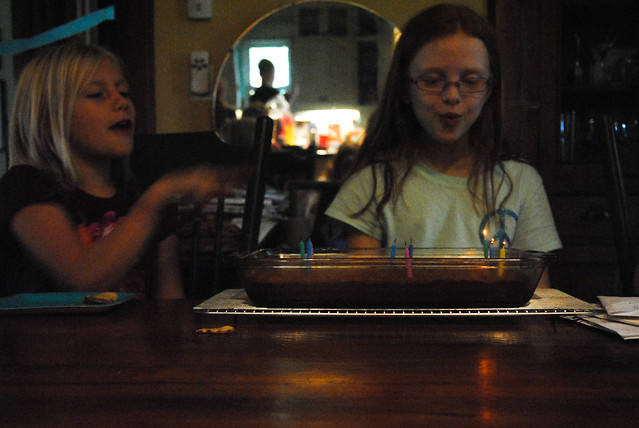 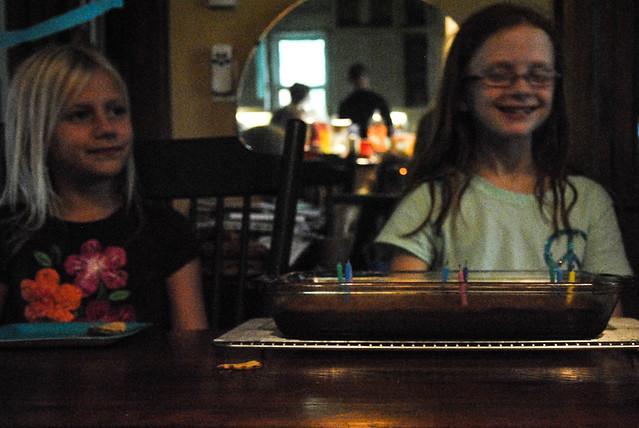 She planned her friend party months ago, with an ever-shifting menu and lists of crafts and games and activities. We ended up serving Kraft Dinner and potato chips for the main course, which I supplemented with bowls of raw veggies and fruit, met with a chorus of, “Mom! It’s not a veggie party!” Moms know how to have fun! (In my defence, the veggies and fruit were devoured.) The whole party was easy, and I was glad to see that Fooey’s friends didn’t mind her stern organizational tone, as she herded them out to go “bowling” with a basketball and a bunch of plastic honey containers, or instructed them to “design your own book cover,” as the opening craft. Be still my beating heart. I was smitten all over again with this kid of mine, now nine.

And I think that catches us up on the news front, minus a soccer tournament on the weekend, to which I brought my camera but then forgot to pull it out of my purse to take photos. Guess I was engrossed in the match. Sorry, Albus. (He doesn’t want his photo posted on the blog these days anyway; or at the very least, wants to curate the photos of himself that do appear. We’re all growing up. More evidence of the time, and its passing.)

About a wedding
This photo has not been staged