The truth about holidays 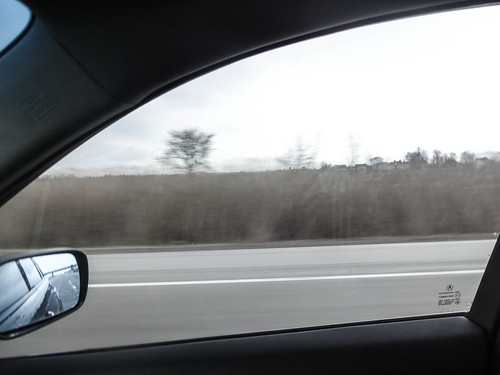 This photo is essentially unrelated to our weekend. What I like about it is the small picture within the bigger picture: the mirror looking backward at a scene that appears to be rendered in black and white, while the almost colourless landscape whooshes past out the window. It’s like a metaphor for a blog post.

I haven’t had a lot to say this week, here in Blogland. I think my thoughts have turned to subjects too large to be confined to this space. It isn’t the medium for the long-form essay; nor is it Twitter-sized. It’s like a scrapbook: photos, captions, a snapshot capturing a fragment of the here and now. I’ve been thinking about renovating my blog so that it can display photos more prominently and text more colourfully, but that’s a big project for a solo artist who can’t seem to keep the counters clean in her actual abode, though she did just fold several days’ worth of laundry, leaving it in yet another basket for her children to put away in their drawers, which they may someday do, someday. One lives in hope.

I ran 23 kilometres yesterday. It was about two kilometres more than my legs wished to go, but I’d planned my route slightly ambitiously. I was aiming for a two-hour run, and it took me slightly more than two hours. I’m oddly un-achy today. Yet oddly grumpy, it must be confessed. I’ve run the vacuum cleaner down the stairs, threatened to give away one child’s computer (as in, physically picked up said computer and carted it toward the great outdoors where I promised to hand it to any stranger passing by), and now I’ve wisely barricaded myself into my office. One of my goals for today is to plan out the summer: last summer I paid the older children to babysit the younger children, including making lunches, and not using video games as entertainment, an entirely successful experiment we intend to recreate this summer.

It’s Victoria Day, and a holiday here in Canada, so I’m getting a taste of the summer that must not happen: everyone underfoot and bored and sulking about the paucity of electronic time and asking for snacks and ignoring the simplest instructions whilst I fold laundry and howl about wasted opportunities and my envy of Mordecai Richler, whose biography still haunts me several years after reading it. (I’m not making this up. The howl of “I wish I were Mordecai Richler!” arises surprisingly frequently when I’m in a self-pitying mood: imagine having someone to cook you fine meals and take your children to their appointments and keep the daily annoyances at bay while you work your ass off doing the only thing you really want to do).

Except take a small step back, Carrie. Do you really want to wallow in envy?

And another small step, please. Mordecai Richler was making a killer living doing the only thing he wanted to do, and while I’m doing fine as far as these things go, basically Kevin and I must share the domestic and professional tasks between us to keep our family afloat. In short, we both have to: cook the meals (some of the time), take the children to their appointments (some of the time), and make space for the things we really want to do (some of the time).

And, hey. Would I really want it any other way? I appear to be feeling better, suddenly. It must be the barricade. And the writing. The writing always helps. I can hear, through my ear plugs, children gathering to make their own lunches (ramen noodles) and the vacuum running (Kevin). And now the piano is being practiced. And the sun is shining. Here are some flowers from our backyard: 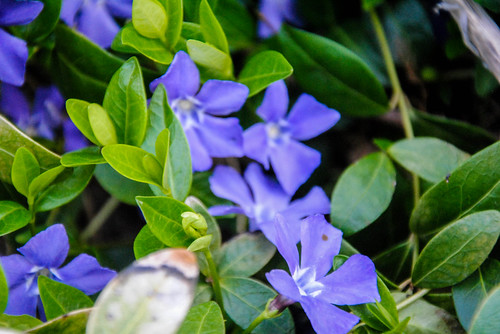 Let me leave you with a few of the wonderful things I’ve read this weekend:

* Ian Brown’s essay on the mulberry tree that once stood in his back yard (aside: I harbour a deeply held fantasy of becoming the female version of Ian Brown)
* Anakana Schofield’s books Q&A in The Irish Times, which is as enormously amusing as one could ever imagine a books Q&A being
* Oy! Feh! So! by Cary Fagan, illustrated by Gary Clement, a children’s picture book that is CJ’s absolute favourite right now, and which is quite a lot of fun to read out loud, especially if you, like me, enjoy doing voices at great volume right before bedtime
* All My Puny Sorrows, by Miriam Toews, which is kind of wrecking me even while it opens me, like all great books do, taking you apart and putting you back together, emotionally and morally, without telling you what to think. I love Miriam Toews.

Can I bottle this, please?
Today, briefly