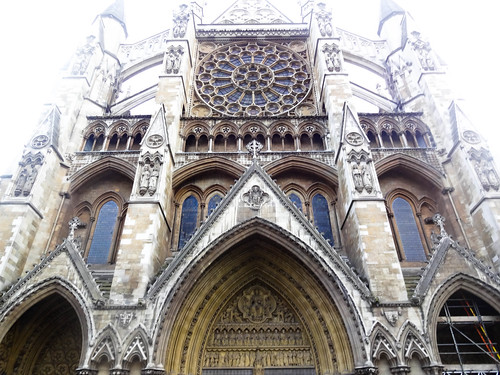 It’s hard to go wrong, when photographing a city like London. Nath and I walked to Westminster from the rebuilt Globe theatre on Wednesday evening, before I left. 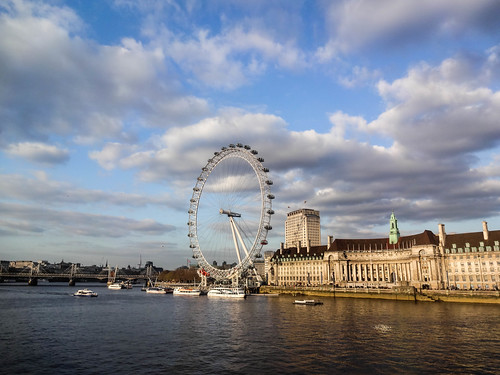 Crossing Westminster Bridge, this was the view behind us (above), with the sun shining, as if it never rained in London — which it almost never did while I was there; I had a running joke with my UK publisher Lisa Highton that she’d arranged the weather especially for my stay. 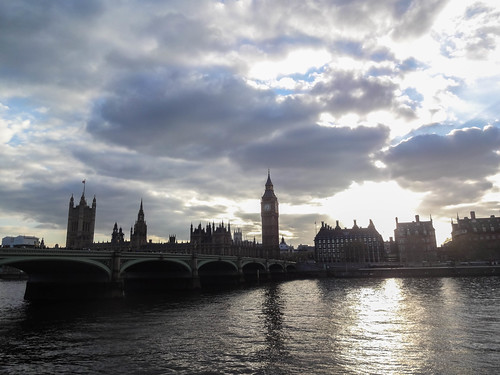 And this was the view from the banks of the Thames as we approached Westminster. On the walkway beside the river were crowds of people, some of them tourists, some commuting home from work on foot or bicycle, and a surprising number of runners, many of them training while wearing backpacks, dodging the crowds while trying to keep up a quick pace. It looked moderately hellish, frankly, although in theory I can see the appeal of running along the river. I much preferred my morning runs in Greenwich Park, with green grass everywhere and buds on trees, and the wafting perfume of the flower gardens in the air. (No photos, however, as I was running.) 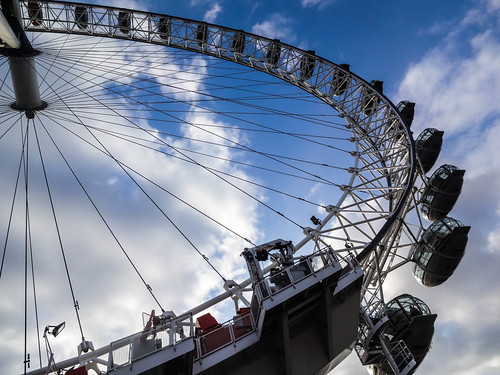 The queue was enormous, so it’s a good thing I hadn’t planned to go on the Eye, although it looked much more tempting up close. Each of those pods holds 25 people. Essentially, it’s a giant money-generating machine. 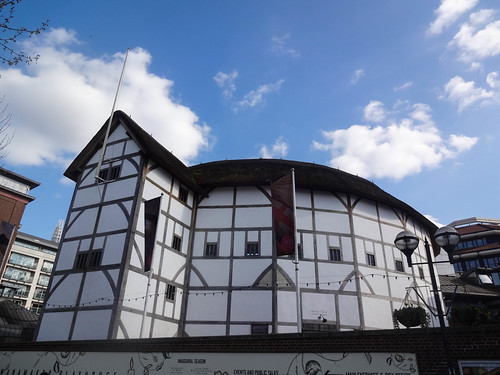 Earlier in the evening, Nath and her kids and I met at the recreated Globe Theatre and went on the tour. It was as if I’d planned it: tickets for the last tour of the day were half price. You know I love a bargain. 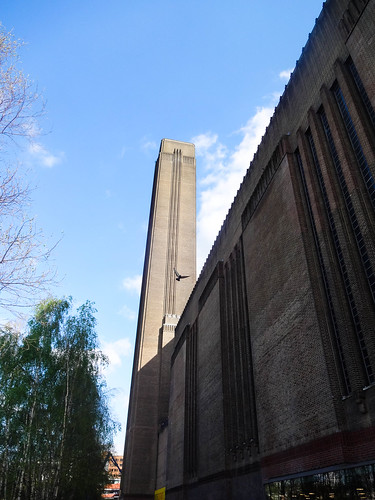 I’m going in reverse, I see, though I’m not sure how that’s happened. Perhaps it’s because, after my 20-or-so hours in transit yesterday, I’m more tired than expected, so exhausted, in fact, that it feels like I’ve entered a kind of fugue state. I have no idea if anything I’m writing here is comprehensible, but I sense this will be a longer post than usual. Brace yourselves. I’d arrived early, Bankside, to meet Nath and kids, so I popped in at the Tate, which is beside the Globe theatre. At that point in my day, I was pretty foot-sore and had lugged my laptop all over London and the Tate seemed enormous, so I stood for awhile before this painting by Dorothea Tanning, an artist I’d never heard of before; I was strangely transfixed by it — it’s quite large, and it seemed almost to move or transform, as if it held figures emerging before my eyes. 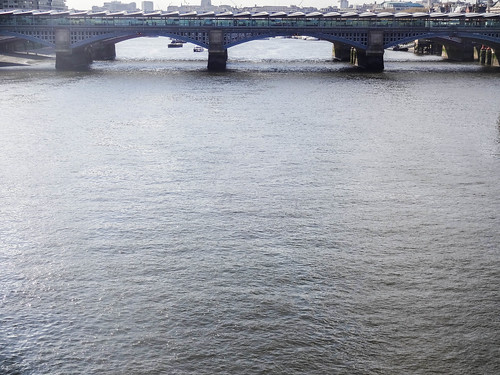 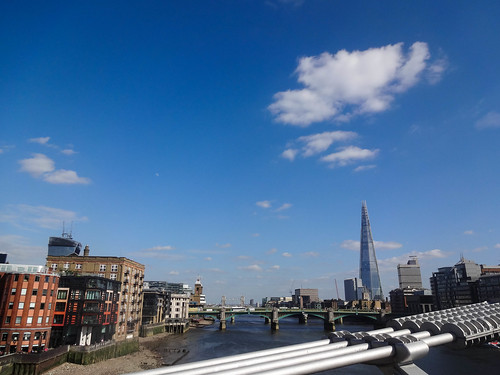 views from the Millennium Bridge

I’d come here on my own by the underground; it took me a couple of days to become oriented to the system of overlapping lines and trains, but I had no trouble finding my way around. If I lived in London, I would never drive. 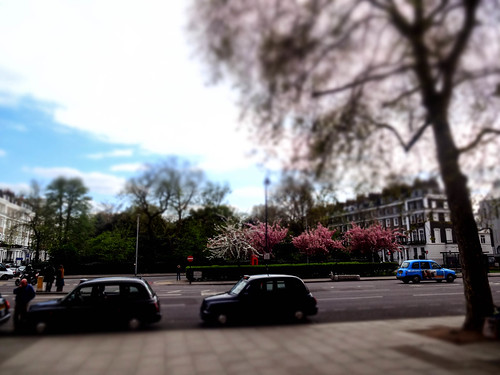 spring, outside the Victoria & Albert museum

Earlier in the afternoon, I went to the V&A, mainly to visit the gift shop for a specific souvenir for Child-Who-Shall-Remain-Nameless, and also to look at clothing and household items from the Renaissance. 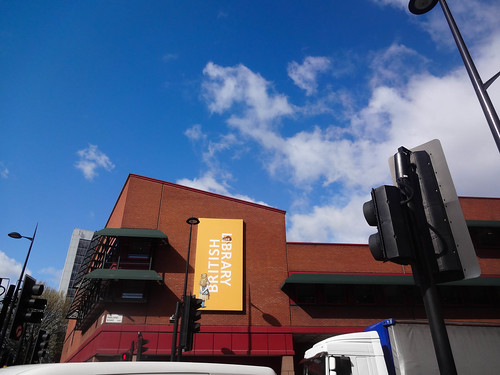 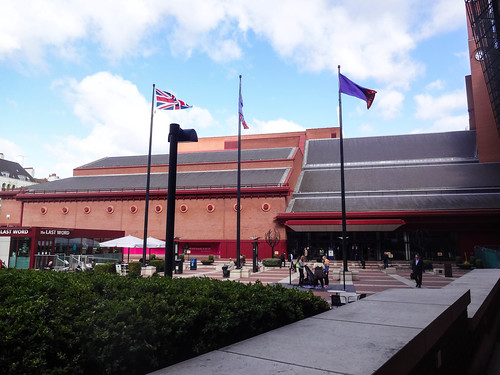 That final day in London was crammed to max, but mostly I spent my time here, at the British Library. 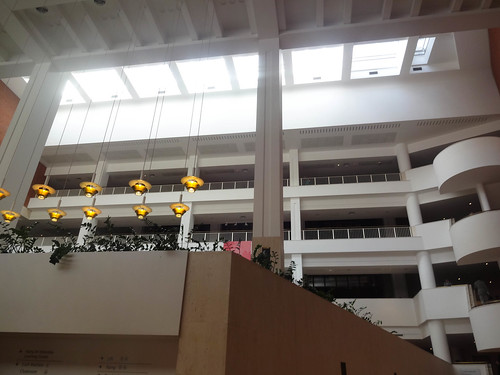 It’s a new building (built within the last 20 years), and it’s bustling and vibrant. The individual Reading Rooms are packed, yet quiet, and in order to protect the valuable and rare material that can be accessed by anyone with a Reader Card (like me!), people are only allowed to bring in a limited number of items, which one carries into the reading room in a large plastic bag, provided by the library. Pencils only. No drinks, no edibles of any kind. Laptops permitted only in certain areas. I discovered on the first day the importance of arriving early, finding a desk, and staking it out for the rest of the day. 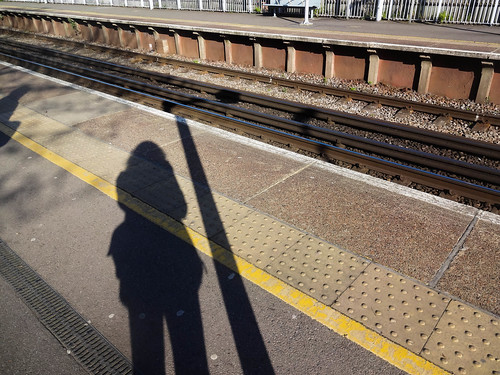 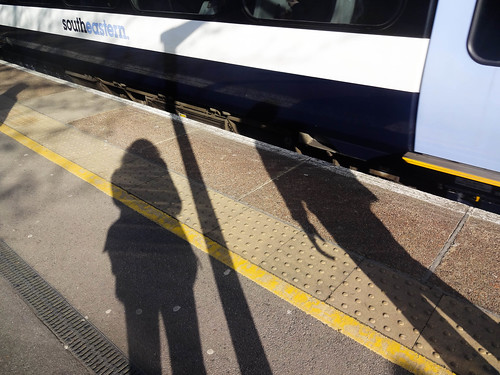 train, before and after arrival at the Charlton station

On Monday, Tuesday, and Wednesday, I commuted to the BL by train and tube. 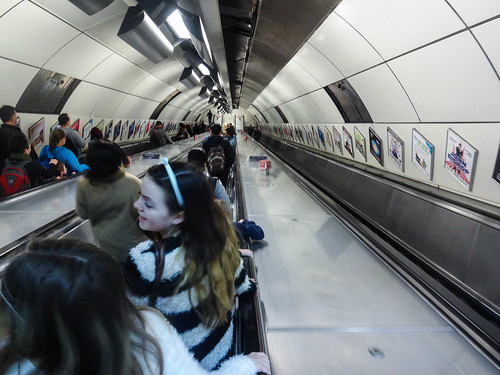 I have a fear of heights. It took me the better part of the week to conquer the fear and be able to ride the escalator without clutching the handrail with a death grip, and literally going weak in the knees. Miraculously, I trained myself out of my fear by the end of the stay. Breathing exercises. For serious.

I have no photos from the parties I went to on Monday evening. It rained, but I brought along a little umbrella that fit into my satchel. I did not wear a dress, but tried to look suitably glamourous. This was achieved with mascara, earrings, and my gold shiny top, three things I never wear under ordinary circumstances. I like to go unadorned most of the time, so that when I dress up the difference is measurable; start with a low bar, that’s my advice. 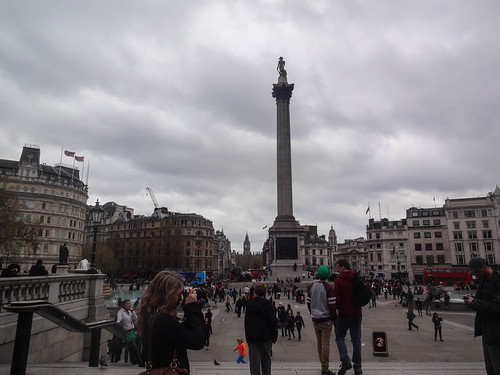 On Sunday, I rode the train and tube for the first time all by myself, and met my agent and my US publisher for lunch. Afterwards, Nath met up with us, and we went to the National Portrait Gallery, which is right behind me in the photo above. Having been once, I would go again, and again. I will never tire of faces. 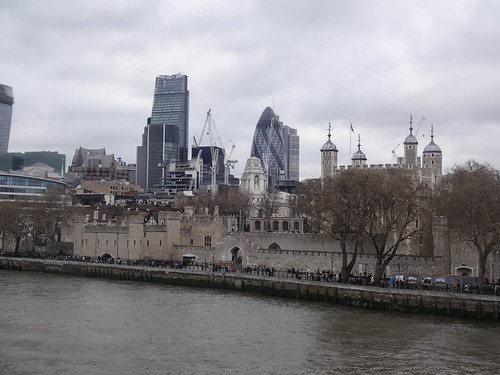 Tower of London, foreground, by the river

Saturday, Nath and I walked all around the old city of London. We walked at least 8 kilometres, according to Nath’s calculations. All of the old buildings are surrounded by new ones. Transposing oneself back in time requires imagination, but that’s fine by me. I’ve got plenty of imagination. 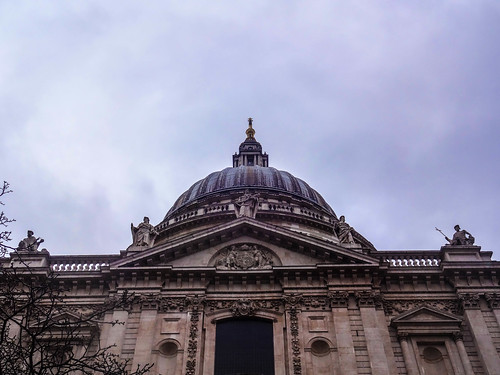 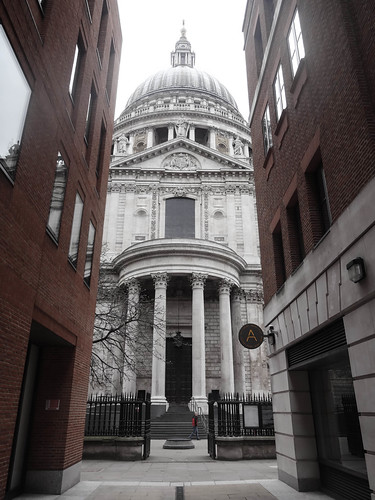 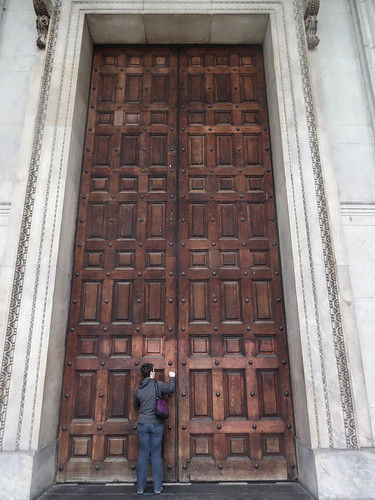 Nath knocking on the door of St. Paul’s Cathedral (as instructed by her photographer) 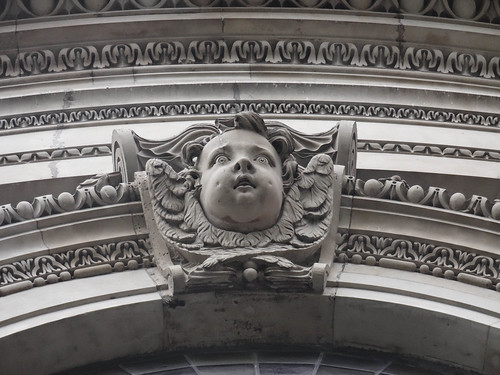 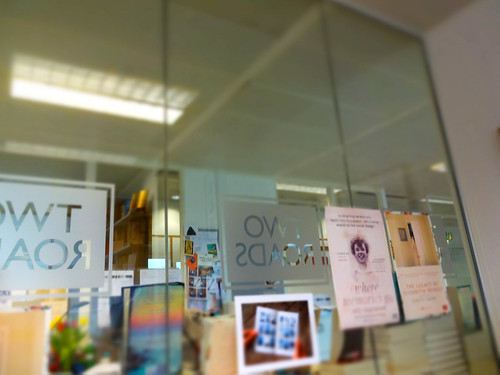 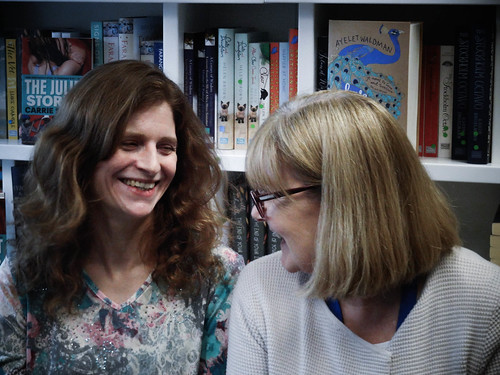 with Lisa Highton, at the Two Roads office

I take a lot of things for granted that I know I shouldn’t. For example, when I arrived in London on Friday morning, I went directly to the offices of my London publisher, where I was welcomed with open arms by Lisa Highton and her crew, and Nath and I were fed sandwiches and fruit followed by a sumptuous cake. I’m not saying I took that welcome for granted, exactly, more that I just find myself rolling with these things as they come. I never quite expected to be where I am, but it is where I am, and so I try my best to be here without questioning it or worrying over the transience of the experience. That’s what travelling is like, too. You roll with what comes at you. You have to, really. And so, jet-lagged and sleep-deprived, I welcomed the welcome at Two Roads, as you can see from the photo above. And later that same day, with a short nap to bolster me, I welcomed the welcome of dinner out with my fabulous Canadian publisher, Anansi, who were in town for the London Book Fair. 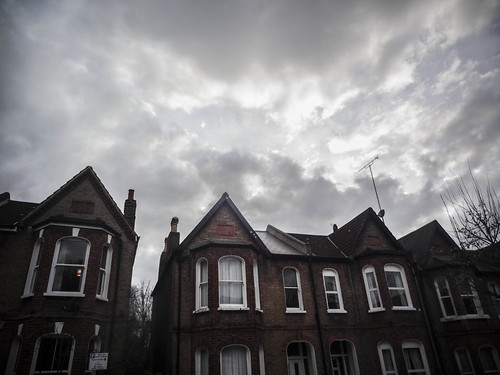 I welcomed the welcome of my friends, too, who hosted me so generously in their home, and who accompanied me around London, and got me oriented. I wouldn’t have gone to London at all if they hadn’t been there — I couldn’t have imagined taking the leap on my own. And that’s what it comes down to, really, the leap of the imagination, which is the first step to any adventure. 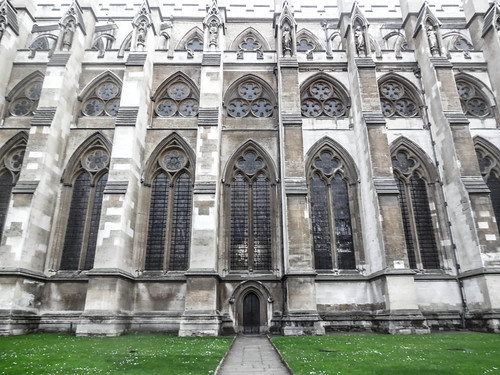