We drove to a conservation area on the nearby escarpment, and rented skis. We spent two and a half hours on the trails, with everyone skiing the entire time.

It was warm and AppleApple took her coat off and left it at a marker, and of course it wasn’t there when we went looking for it, hours later, after the visitor’s centre was closed. But I called this morning and apparently it was returned to the centre by a kindly passerby, so we will just have to go back and ski again this week (and get the coat: the temperature is dropping, blowing snow forecast for tomorrow). Highlight reel:
* being outside
* being in the woods
* playing in snow
* doing something everyone enjoyed
* being active together Of course, let’s admit that we had a few rough moments. Losing the coat was a (temporary) annoyance. We also split up about midway through the adventure, with CJ and Kevin heading back toward the visitor’s centre together, and the rest of us continuing on a longer looping trail. Except the older two skied much faster than Fooey could manage (she was hampered not only by being small and recovering from a stomach bug, but also because she had to wear boots and skis that were my size, nor hers). While she grew more and more exhausted, I grew more and more frantic, unable to catch up to or communicate with the older two, to tell them we needed to turn around now. (There was no way I could have carried Fooey and skis out of the woods — we were many kilometres in at that point, and I needed her to make it on her own steam.) Finally, I decided to turn around without the older two, hoping they would have the sense to come back looking for us (they had agreed to stop and wait for us at a point we’d seen on the map, aka “the mythical G”; it never materialized). About forty minutes into this scenario, the big kids turned up behind us, glowing and unaware of the angst they’d caused us. I did not let them leave our sight after that. So, in future I might make a few amendments in planning. Ten-minute check-ins? Travelling with a backpack and a cellphone? 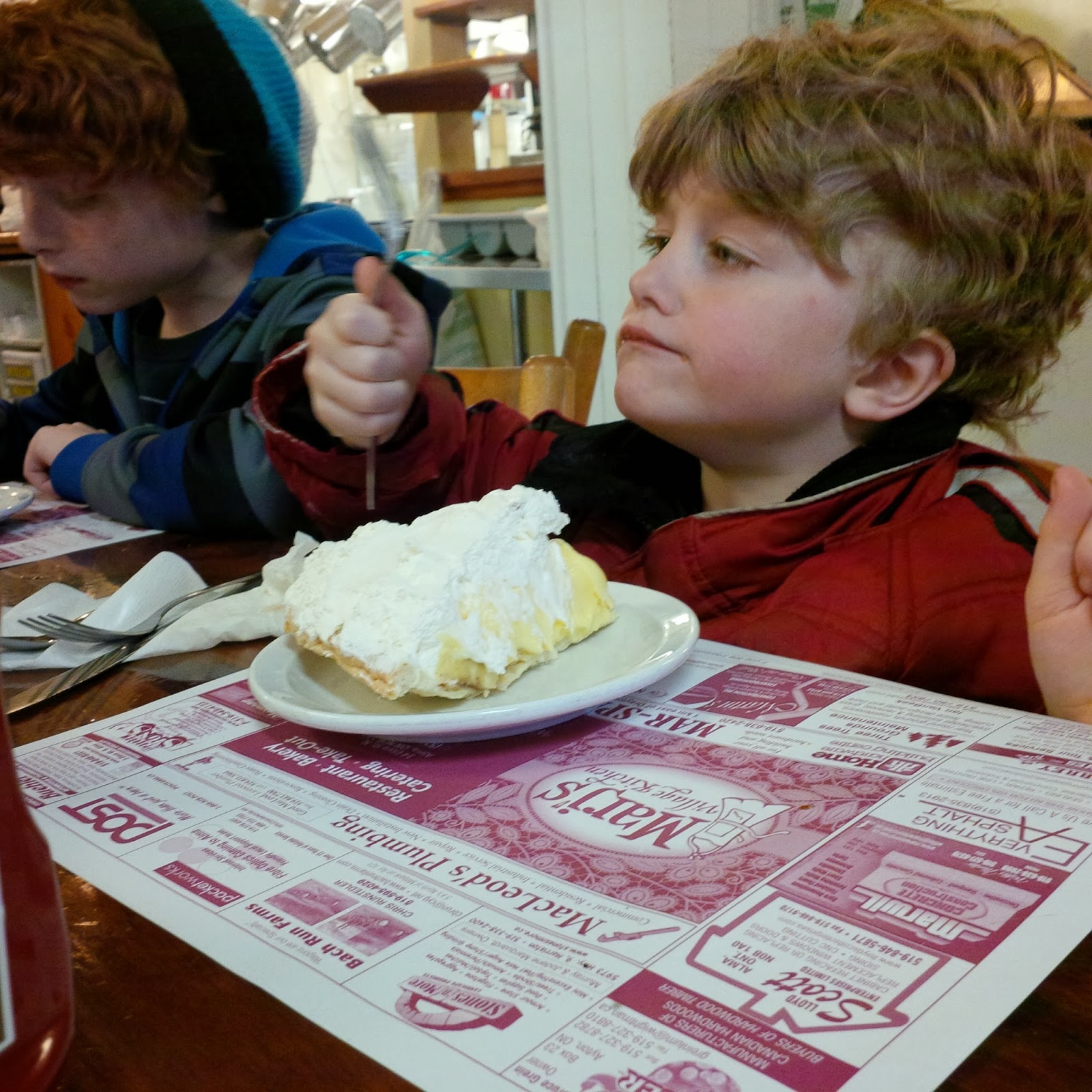 We finished with pie at Marj’s Diner in Alma, on the way home. Pie that was almost as large as this very tired child’s head. That’s banana cream, if you’re wondering.

Roasted squash recipe, or, it's nice to have an oven again
Kiss me, I'm grumpy