It’s a beautiful morning in Canada

I’m collecting all these photos to illustrate blog posts that have gone unwritten.

For example, these photos are from last Thursday, when I got up early with AppleApple who was swimming, went for a lovely run (first I checked the temperature and actually said to myself, hey, -24 with the windchill, that’s not bad!, mainly because I’d been expecting -30 and you’d have to admit, by comparison, -24 sounds positively balmy). I started my run around 5:30AM and discovered that the sky was growing pink by 6:20AM. It was a beautiful morning in Canada! (Today, I was running in nearly broad daylight by 6:45AM, although it was still -24 for some reason. I run on Tuesdays with my friend Nina, and we swear that this winter’s trend has been: Tuesday will be the coldest morning of any given week.)

So last Thursday, post-run, post-shower, post-poached-eggs-for-breakfast I fetched AppleApple from swimming, and tapped out a blissfully happy status update on FB: A beautiful morning in Canada! Then I took a nap. Kevin got the little kids up to their friends’ house before walking to his office. The older two were both home, one sick, and the other taking a “mental health” day (which we all need, on occasion). I was woken from my nap by the sound of wind striking the house. It was that loud, that dramatic. I opened my eyes to a scene of winter obliteration outside the window, and saw the time: 8:57AM. Exactly when my two little kids would be walking to school with their friends. So much for the beautiful winter morning in Canada! My initial instinct was to hop in the truck to try to “rescue” the children, but after I’d texted Kevin and the parents of the walking friends, I downgraded my response to “anxious pacing.” It was clear that driving in such conditions would help no one. (In fact, the shockingly sudden snow squalls caused enormous pile-ups during the morning’s commute.) The squall blew itself out in less than 15 minutes.

That afternoon, Fooey reported that they were nearly at school when the snow blast arrived — “I couldn’t even see J, who was right in front of me!”

“Was it kind of exciting? Like an adventure?” I asked, hopefully.

Right. Hello, realism. Well, at least no one was scared or lost or sad, from the sounds of it. Tough little Canadian kids we’ve got. 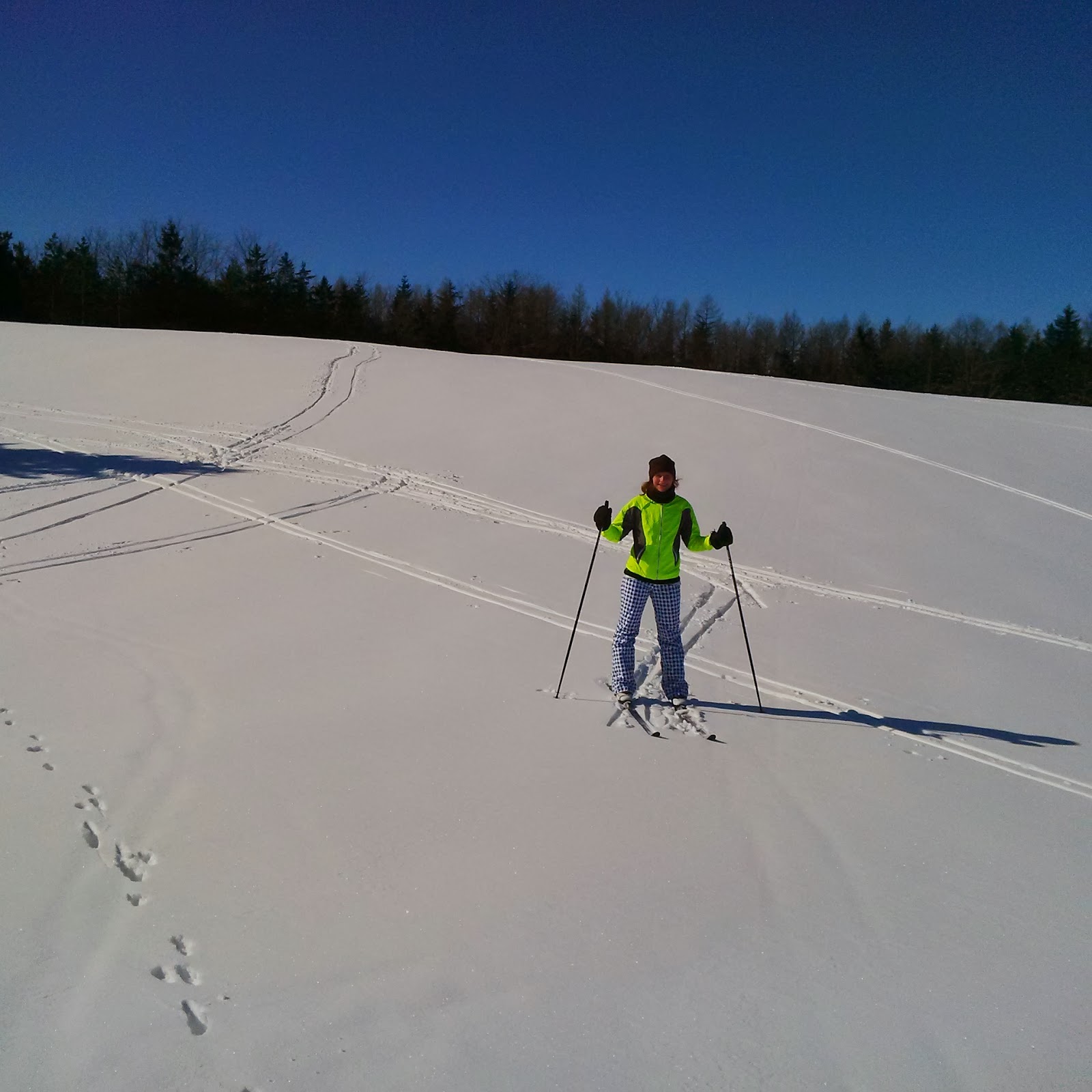 On Friday, I met Kevin for lunch and I splurged, which is not a word that I usually associate with my purchasing actions (I hate shopping, as a rule). I bought x-country skis, boots, bindings, poles, plus vastly reduced snow pants (everything was on sale, which helped me to justify the decadence). And then on Saturday I went skiing while Kev took the kids sledding. I went out again yesterday morning with a friend. It was -27 for some reason. It was also stunningly beautiful. I used to hibernate during winter and get pretty blue. A few years ago, I discovered that running was an all-season activity, given the right clothing. Winter improved immensely when I started getting outside in it. But there are times, as when slogging up a slushy street struggling to find footing, when one thinks to oneself: I’m trying my best, but let’s be frank — this sucks. When will this damn stuff melt so I can really run again? Truth is, I’ve never embraced winter sports; I’ve never, up until last Friday, invested in any equipment that would deliberately draw me out into the snow, that would induce me to think, even faintly, hey, I hope this snow lasts awhile longer because I’d really love to go out skiing again soon! That is a whole new level of winter acceptance right there.

The fireplace in the living-room doesn’t hurt either.

I’m 39 years old and I’ve spent the better part of my life in this country. I think I’m finally starting to feel like a real Canadian.

The long winter
Larger than life