I just accidentally erased the most darling photos of CJ, taken by AppleApple, after Fooey had styled his hair into a swoop across his forehead. I’ve lost other things over the years, too, to digital carelessness or breakdown. It’s always hard to believe something’s gone, when it’s gone. But those comical photos are gone. Loss is a painful emotion, complicated by regret. I’ll get over it in a moment. This post will suffer from their absence, however. Photos affect tone, and those were really funny photos. But these photos are lovely too, taken during a recent fitting; my mom is making AppleApple a dress with puffed sleeves and a puffed skirt (that she might wear to my sister’s wedding this summer). 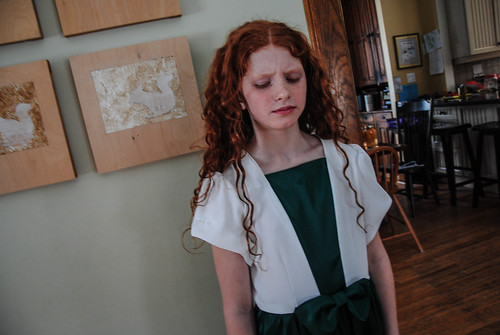 There’s a commercial running during the Olympics right now with the tagline: Your someday is here. It shows athletes ready to compete, while in the background run faded film scenes of their child-selves, practicing their sport. I find myself curiously affected by these ads; I’m not moved to tears, I’m moved to a faint frisson of panic. Your someday is here. Yikes. Talk about pressure. It also whispers to me: your time will be here and gone before you know it. (I’m obviously in a cheery headspace.) Because doesn’t it also shout: Everything you’ve worked for has brought you here! Celebrate! Enjoy the fruits of your labours! 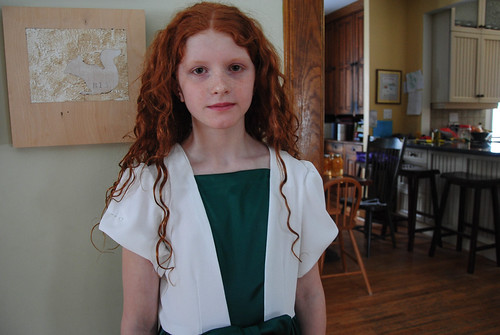 This week, the Globe and Mail ran a comprehensive obituary on Mavis Gallant. It was heart-breaking to read that she spent her last decade “plagued by ill health and poverty.” Poverty. That word guts me. I reflect on the number of times I read and re-read Gallant’s stories during the past decade, for inspiration, for pleasure, and to admire and try to parse her technical skill as a writer, and how that pleasure received should have been repaid, somehow. Yes, I’ve bought her books over the years. But considering how many times I’ve read them, those purchases were bargains. How to repay a writer for her gift? How to offer appreciation that affords a great writer simple comforts as she ages? Gallant said in an interview in 2006 that “luckily” she had the temperament to be a fiction writer: “I never wanted to own anything — like a bird on a branch.” So maybe I’m projecting my own worries about future financial stability onto a writer who perched above all that, like a bird on a branch. She always noted that her name, Mavis, meant song-bird.

Mavis Gallant was 91 years old when she died.

A series of unfortunate events
Unwinding